A total of 400 herds are still being assessed and awaiting approval to partake in the second phase of the Beef Data and Genomics Programme (BDGP II).

This equates to approximately 21% of the entire number of applications submitted, according to the latest figures released by the Department of Agriculture, Food and the Marine.

BDGP II opened for applications in April of this year; farmers interested in applying were given until May to submit their applications. The department confirmed to AgriLand that it received a total of 1,900 applications.

Of these applications, 1,500 have been found eligible to participate.

The remaining 400 herds are “currently being assessed” for eligibility, the department added.

Like the original scheme, BDGP II requires farmers to commit to completing various actions over a six-year period in exchange for a series of payments.

However, concerns over the level of participation in the BDGP scheme have been raised by Fianna Fail’s Agriculture Spokesperson, Charlie McConalogue.

He said: “The latest parliamentary reply that I have received shows that there are 23,709 farmers enrolled in the BDGP I, while only 1,900 applied to BDGP II – giving a total of 25,609 farmers.

This clearly illustrates how farmers aren’t buying into the scheme due to the highly complex and heavily bureaucratic burden involved. This is evidenced by the fact that 5,230 farmers have withdrawn from the scheme to date. 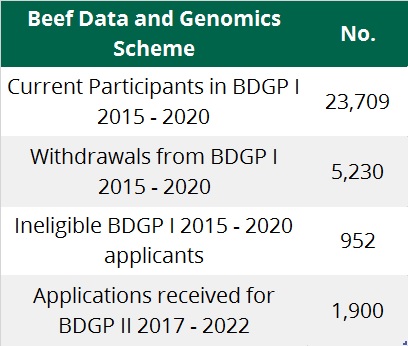 This contrasts with the participation rates for the suckler cow scheme exceeding 40,000 farmers when Fianna Fail was in government, McConalogue continued.

“It is an imperative that the minister ensures that this underspend does not result in suckler farmers losing out on these vital funds.

“The full allocation under the scheme must be used within the current Rural Development Programme window to 2020,” he said.

Compulsory tag levy for farmers on the horizon