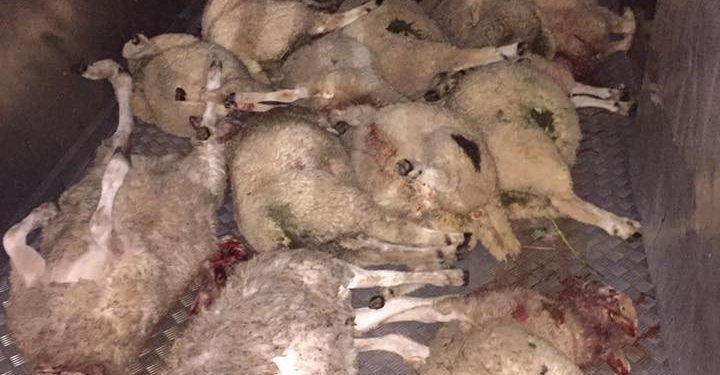 Some 31 lambs, believed to be worth in the region of €12,000, have been killed in a dog attack in Herefordshire, England.

A police helicopter and 20 armed police were deployed to search for the two dogs involved in the incident after they were notified of the attack which happened on September 2.

Tom Hadley, the farmer of the sheep, was alerted to the attack on Friday evening and found the sheep, which had been recently weaned, attacked.

Some of the sheep had to be put down such was the extent of the injuries.

A 64-year-old man from Risbury, Leominster, has since been arrested by West Mercia Police on suspicion of being the owner or person in charge of a dog that is dangerously out of control.

A statement from the police said that this follows an incident in which a large number of sheep had been attacked and killed by two dogs. The incident is believed to have taken place between 12pm and 4pm.

He has been released on police bail until 16 October 2016. Inspector Daniel Pilkington of West Mercia Police said reminded the public that it’s is an offence for a dog owner and anyone controlling the dog to allow it to worry livestock on agricultural land.

“If this happens, individuals may be prosecuted or fined and ordered to pay compensation. We would like to advise the farming community that we take any reports of this nature very seriously.

“Under the Animals Act 1971 a farmer, landowner or anyone acting on their behalf has a legal right to shoot your dog to protect their property.

“We would like to remind dog owners to please keep their dog on a lead at all times but particularly where there is livestock in the area.”

Police are appealing to anyone who may have any information leading up the circumstances involving the incident, please call West Mercia Police on 101, quoting incident 520s of September 2, 2016.

Warning the images below are graphic and may be distressing to some readers.