The sheep trade continues to go from strength to strength, with top prices for hoggets now at €7.00/kg.

Prices at the top end of the market are ranging from €6.90/kg up to €7.00/kg, but many sellers are securing €7.00/kg especially in the case of those handling large numbers. There are reports of isolated deals being done at up to €7.10/kg but it seems as if €7.00/kg is where it is at the moment.

Numbers of finished hoggets remain tight, with many mart managers reporting smaller numbers on offer over the past week, with numbers continuing to be small at sales held today (Monday, March 1).

However, factory agents have been very active this past week and at sales held earlier today and are competing strongly with butchers and wholesalers for supplies.

This is quite evident at sales, with prices for those finished hoggets pushing on once again this week.

Looking at the quotes on offer, Kildare Chilling has moved to increase its base quote by 30c/kg from this time last week and is now on €6.70/kg plus a 10c/kg quality assured (QA) bonus.

Irish Country Meats (ICM) has also moved to increase its base price from this time last week by 20c/kg and is now on €6.50/kg plus a 10c/kg QA bonus.

Although supplies remain tight, increasing factory prices are seeing more numbers come out, as the weekly throughput continues to increase. For the week ending February 21, 46,359 sheep were processed, which was up 4,662 head on the week before.

Both sheep chairs of the Irish Farmers’ Association (IFA) and the Irish Cattle and Sheep Farmers Association (ICSA) have said that very tight supplies are forcing factories’ hands into increasing prices, with many now having to pay up to €7.00/kg in order to tie down numbers.

The sheep kill for the week ending February 21 totalled 46,359 head which is an increase of 4,662 head on the previous week.

The number of hoggets processed for the week ending February 21 amounted to 40,149, which is an increase of 2,041 head on the week before.

Meanwhile, the number of ewes and rams processed at meat processing plants came to 6,209 head last week, which is up substantially from the week before (+1,311 head). 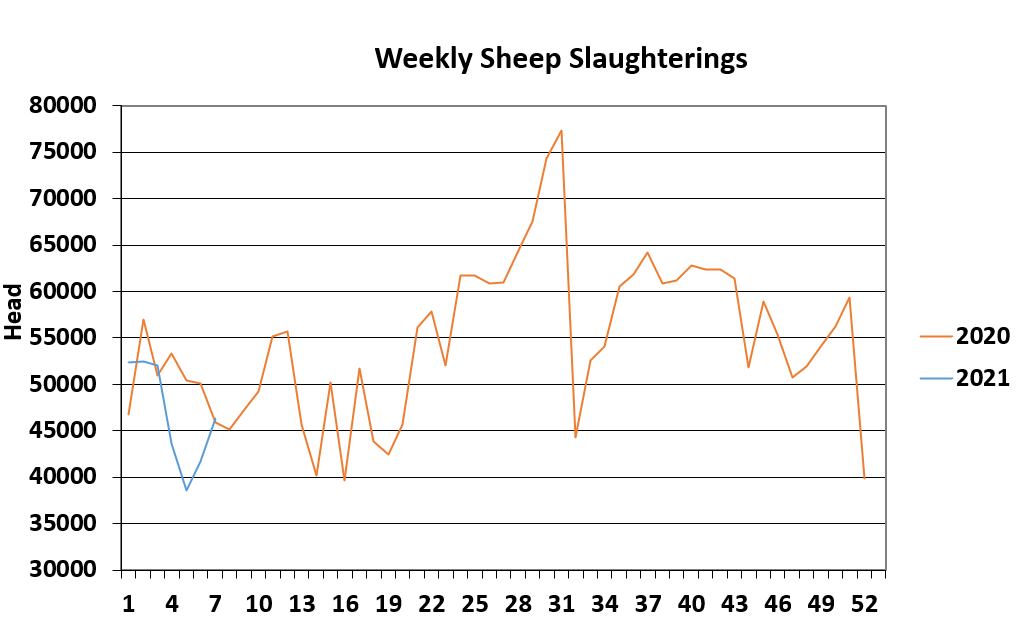