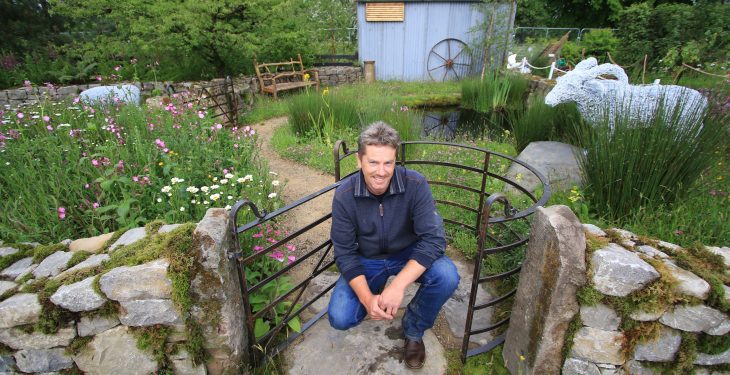 Barry Kavanagh, on his Across Boundaries show garden.

Bloom first-timer James Purdy from Belfast won both the Overall Medium Garden category and Best Plant Design Award (new this year) for his ‘Podscape Garden’, which demonstrates a sustainable approach to everyday life.

The highly experienced and renowned team of international Bloom judges, led by head judge Andrew Wilson, together with award winning garden designers and the curator of the National Botanic Gardens, spent over two days meticulously observing and deliberating before announcing the results this morning.

The judging panel awarded a total of 57 medals to show garden designers and nurseries including; 24 gold, 12 silver gilt, 13 silver and eight bronze.

Each of the judges acknowledged the exceptionally high standard of this year’s show gardens, with a record number of gold medals awarded across show gardens and nurseries.

Today at Bloom, the President Michael D. Higgins will visit the show and so will the Minister for Agriculture, Food and the Marine Michael Creed.

The Department of Agriculture, IFA and National Dairy Council sponsor Barry Kavanagh’s garden “Across Boundaries”, which the Minister is expected to visits.

The gold medal winning garden expresses how social farming can play a vital role in the therapy of participants within the healthcare system.

In addition to the showgardens and floral displays, Bord Bia’s Bloom 2016 festival includes more than 100 Irish food and drink producers, 200 retailers and 50 of Ireland’s top nurseries, all providing gardening tips, artisan food, craft beer and much more to more than 100,000 visitors who are expected to attend over the five days of the festival.

Since the first year of the festival in 2007, the show has doubled in size to a 70ac site. Attendances have also skyrocketed, with Bord Bia hoping to welcome 100,000 visitors this year, compared to just 40,000 in year one.

Bloom opened its doors at 9am this morning (June 2) and will run to 6pm each day. For further information, or to purchase tickets, visit the Bloom website. There is no entry charge for children under 16 years of age.