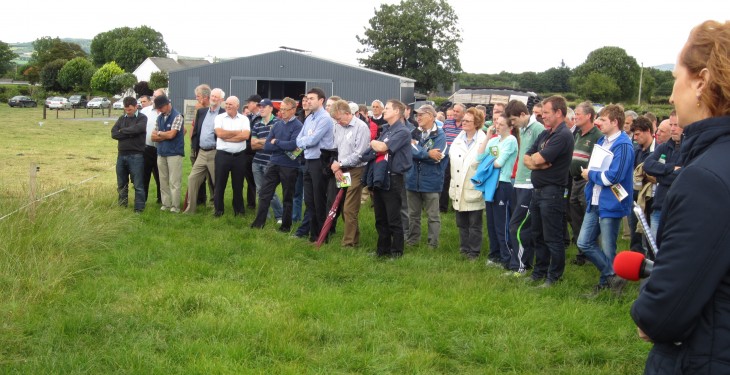 Part of the crowd at the Irish Grassland Association's beef open day in Waterford.

He said that over the next couple of years, based on evidence that’s around, especially this year, the majority of beef will sell in 280-300kg box, whether they are heifers or bullocks.

“It’s a question of, based on the feedback we are getting, producing something that is leaving a margin for farmers and a margin for everyone else, based on a 280-380kg carcass. But things change and we know about cycles and we know there will be quite a bit of flux going forward. But, the demand that we see for the next two to three years is for a caracass of 350-370kg for steers.”

The possibility of a bonus, he said, for carcasses from suckler-based stock can only come from the market. “The consumer going into a shop in Italy or Germany is not aware of, and is not consumed by, the cost of a suckler farmer compared to another enterprise. That comes down to marketing and creating that point of difference. Where it exists and where it is exploitable, it is exploited. But it’s not the general requirement in the market.”

That consumer, he said, spends approximately €10 on meat when they shop. “It’s what the consumer can afford to spend when they go to the supermarket and it depends on whether they want five chicken fillets or five pork chops or two striploin steaks. That’s the game for 75-80% of what is going out of this country.”

However, he said that, regardless of what we think Europe is still the highest paying market in the world.