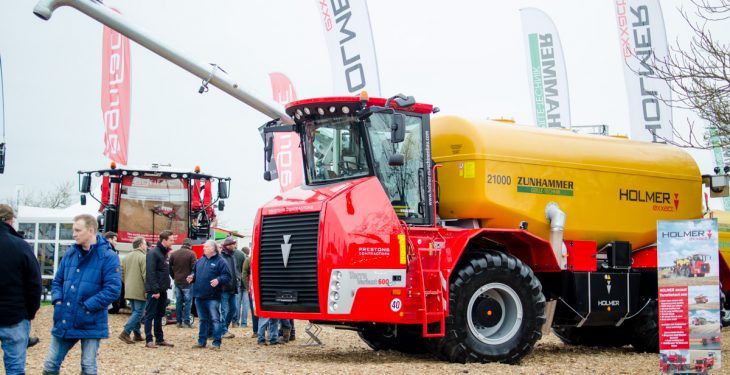 Over 900 exhibitors showed their wares at LAMMA 2017 in Peterborough, England.

The event kicked off yesterday, January 18, and closed today. Among the tally of exhibitors was a strong cohort of Irish agricultural machinery manufacturers.

The show started in 1982 as a showcase for the latest agricultural machinery for local farms, established by small group of manufacturers from Lincolnshire.

Since then, and following the demise of the Smithfield show, LAMMA has grown to become the UK’s largest machinery show. LAMMA stands for Lincolnshire Agricultural Machinery Manufacturers Association.

Some 40,000 people visited the show last year. The organisers say that, based on yesterday’s attendance, they are are expecting similar visitor numbers this year.

Agriland was there, to sample the atmosphere and cover the latest developments in the machinery world.

McCormick launched its most powerful tractor line-up yet; the new, three-model X8 series.

Comprising the X8.660, X8.670 and X8.680, maximum power outouts stretch from 264hp to 310hp. All are fitted with Beta Power FTP (Fiat Powertrain Technologies) engines built to McCormick’s specifications. The engine is not a stress-bearing component. It is mounted in a half chassis, which is derived from the discontinued ZTX series.

A continuously variable ZF transmission is fitted as standard; a 50kph version is available.

Abbey Machinery showcased its latest 2750R (2750-gallon) vacuum tanker at the show. It’s already popular in Ireland, said Michael O’Grady, Abbey’s Sales, Marketing and Business Development Manager. He said, “The machine fills a gap in the market, especially in instances where a 3000-gallon machine is just too big or too long”.

The company expects that most machines destined for the UK will be of a relatively high specification, including auto fillers. According to the firm, some of the demand for such machines is driven by AD (Anaerobic Digestion) plants – of which there are over 600 in the UK.

Manitech loaders are already a familiar sight at Irish machinery shows. Manitech’s Ray Sheeran, from Tyrellspass, Co. Westmeath, said, “We have come to LAMMA to expand into the UK market”.

We already have about 40 machines out working in Ireland.

The M20, which is mainly aimed at livestock farms, was priced at £30,000 excluding VAT for UK buyers at the show. The slightly larger M30 had a special show price of £40,000 excluding VAT. Built in China, Ray describes a Manitech loader as an ‘affordable’ option.

Aptly named Giant telescopic handlers are designed and built in Holland. The company, Giant Tobroco, has been manufacturing these machines since 1996. Now it offers a total of 36 different models, which are sold in 40 different countries.

The D254SW is powered by a 3-cylinder Kubota D902 engine. Maximum lift height is just over 2.8m. Tipping load is 0.9t. The machine is just over 0.9m wide and weighs 1.1t. It is one of the smallest machines in the line-up. The UK show price was approximately £16,000 excluding VAT.

UK company Gissing FE manufactures a range of high-specification, high-capacity vacuum tankers for agricultural and industrial use. All models have a separate chassis system, on which the tank sits. This facilitates the fitting of a heavy-duty 3-point linkage at the rear, to carry heavy applicators. Pneumatic suspension is fitted as standard.

On display was a striking black-liveried Cobra 16,000-litre model. The top-specification version (which comes with an overhead boom and an on-board electronic control system) costs approximately £70,000 excluding VAT.

Another eye-catching machine at the show was Lite-Trac’s SS 3000 Tool Carrier. Built in Peterborough, England, this machine has a 19t payload capacity. It’s powered by a 240hp Cummins engine, which is coupled to a 6-speed automatic powershift gearbox with a locking torque converter. Maximum travel speed (on the road) is 50kph.

The cab may look familiar; it is bought in from New Holland.

The machine is designed to carry specialist, de-mount equipment, such as high-capacity sprayers or lime spreaders. Asking price for an SS 3000 is approximately £150,0000 excluding VAT.

There is one Lite-Trac in Ireland. It is an SS 2400 model and it is gainfully employed on a commercial tulip farm in Co. Dublin.

Sumo is a British designer and manufacturer of cultivation and drilling equipment, based in Yorkshire.

Its best-known product is the Trio cultivator, which can be had as a mounted, trailed rigid or trailed folding machine. More than 3,000 units have been produced; some are based here in Ireland. The Irish agent is Moore Unidrill, Ballymoney, Northern Ireland.

Standing proud on its exhibit was ‘Sumo Man’. This imposing metal figure is made from obsolete and spare components and was painstakingly pieced together to promote the firm’s parts business. While ‘Sumo Man’ has been doing the rounds for almost four years, he was joined this year by ‘Sumo Dog’, or ‘Tyson’ as he has become known.