Ireland could have its first crop of sweet potatoes next year, Pat Fitzgerald, Fitzgerald Nurseries Managing Director, has said.

The material is grown from a cutting, not from a seed, like regular potatoes and it will only be commercially grown in greenhouses.

Fitzgerald Nurseries, whose lab is in Enniscorthy and has two nurseries in Kilkenny, currently tests 27 varieties of sweet potatoes.

The nurseries currently have six varieties on the commercial market and are protected on the EU market on behalf of Louisiana University in the US.

Pat Fitzgerald told Agriland that he’s been working on them since 2007 and its been growing since then.

The nurseries manage the technical stock production and stock breeders rights side of things, it was the first in Europe to take separate varieties and test them for different climate zones and cooking uses. 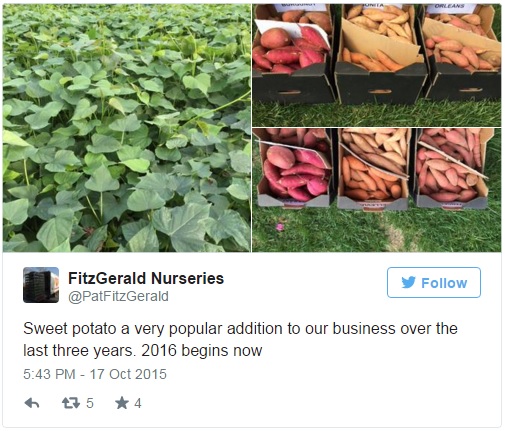 “It didn’t become a good commercial opportunity until 2012 and since then it’s become one of our fast and top selling products,” he said.

The nurseries export 500,000 cuttings of the crop to hobby gardeners/small growers each year and in the nurseries is also partnered to a company in the French market where it exports 1.5m cuttings a year.

Looking to the future, he said that the demand in Europe is there and growing, especially in the fresh market.