The price Irish farmers were paid for steers during the month of November was the lowest in three years, figures show.

Figures taken from the Department of Agriculture show that all of the main categories of steers were cheaper this November compared to same time in 2015 and 2014.

Looking at U3 steers, the prices paid to farmers for these animals during the month of November was 23.9c/kg lower than in 2015 and back by nearly 12c/kg on the corresponding period in 2014.

Moving on to R3 grade animals, November prices for these steers were back by 24.8c/kg and 11.33c/kg for the respective months in 2015 and 2014, while R4 steers also posted a similar price decline. 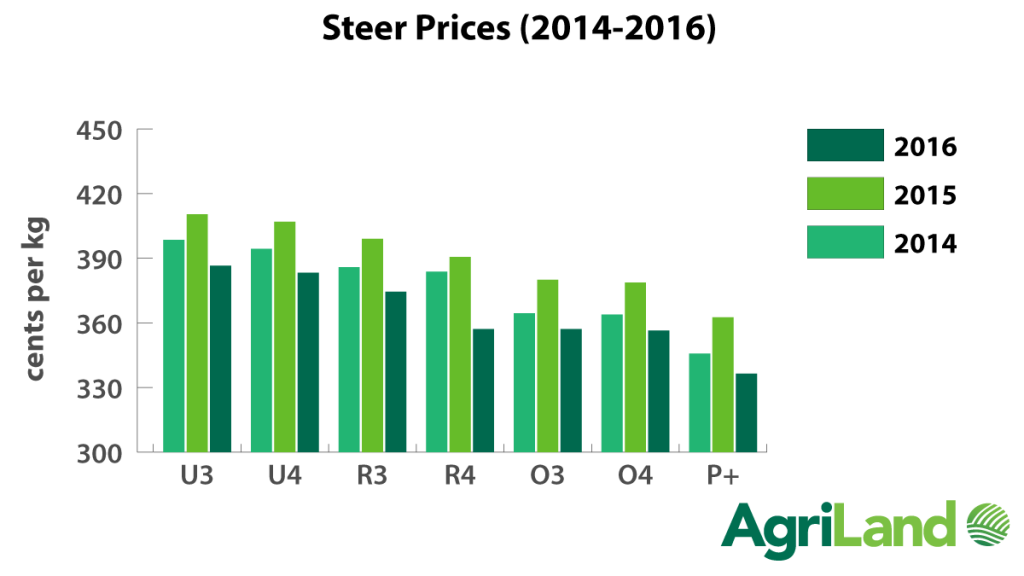 Figures taken from the Department of Agriculture

The plainer O3 and O4 steers were also worth less this November when compared to the previous two year’s prices.

Figures from the Department of Agriculture’s Beef Market Summary also show that P+ steer prices were back by 26.12c/kg when compared to 2015 and down by 9.37c/kg on the same month in 2014.

Figures adapted from the Department of Agriculture’s Beef Market Summary

Back in late October,  the prices offered by procurement managers for both steers and heifers fell, with many blaming fluctuations in the currency market for the weaker trade.

This weaker trade continued for much of the month of November, as additional cattle supplies prevented prices from rising, while the continued weakness of Sterling also had a negative impact.

At one stage cattle buyers reported having strong supplies booked into slaughter, with most factories reporting their lairages to being full or close to full.

23 months on - How much Irish beef has made it to the US?