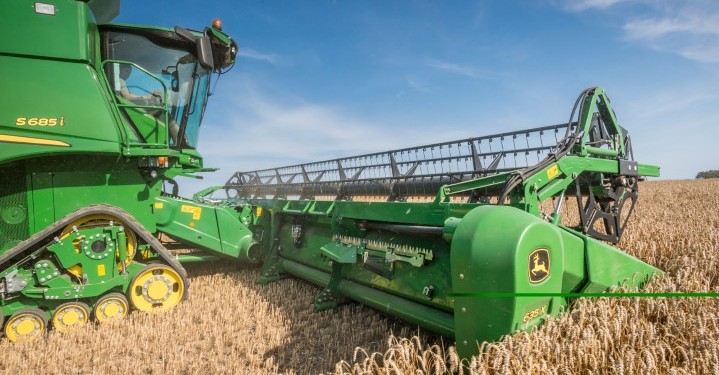 Two of John Deere’s latest combine and sprayer developments were on show at major arable show, Cereals 2015, in the UK this week.

The 600X Series infinitely variable cutting platform with extendable knives was available in limited quantities for the 2015 harvest and will be in full production for 2016.

A completely new design allows the header to be converted for use in different crops in less than four minutes.

With no extra parts needed and an additional 800mm available for table adjustment, the 600X can help to significantly reduce header losses, especially in oilseed rape.

Features include integrated knives for oilseed rape and the availability of header settings on the in-cab touchscreen display, which can be automatically adjusted depending on the crop being harvested. The operator can enter both crop and stubble height into the display, after which an optimum suggested table length is recommended for maximum feeding and performance in all crops and varieties.

The second development is the PowrSpray solution system for John Deere’s high specification R900i Series trailed sprayers, which are now available in three tank sizes of 4400, 5200 and 6200 litres. The new R944i 4400-litre capacity model made its UK show debut at Cereals 2015.

PowrSpray features two hydraulically-driven centrifugal pumps. The first fills the sprayer at up to 1200 litres/min, while the second 1000-litre/minute spraying pump has Direct Rate Control for fast changes of application rate and the highest spraying accuracy.

The self-priming, low-pressure filling pump fills the sprayer rapidly even with the tractor engine at idle, thus reducing fuel use and noise levels during the filling process. It is also used to prime the higher pressure spraying pump.

The Direct Rate Control of the spraying pump is able to adjust between minimum and maximum output in less than three seconds, increasing rate control accuracy to a level that conventional systems cannot match.

This is especially important during entry and exit of headlands, where changing forward speeds and automatic section switching place heavy demands on rate control systems. In addition, Direct Rate Control significantly improves the accuracy achieved in variable rate applications, where large changes in target rate may be required.