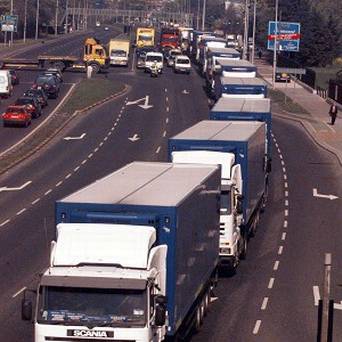 A new eco-tax in France on heavy-good vehicles (HGVs) will cost €100m in additional costs each year for Irish exports into Europe, according to John Whelan, chief executive of the Irish Exports Association (IEA).

The new French tax comes into effect on 1 October this year and is applicable to all good vehicles over 3.5 tones using free motorways, national highways and some local roads in France. A similar charge already exists in Germany, Austria and the UK, with Spain due to introduce the charge in 2016.
In a statement yesterday, Whelan warned that EC Transport directives and regulations are having a disproportionate impact on the competitiveness of Irish export industries.

“We have recommended to the Transport Minister two courses of action, which he should immediately implement; Reduce HGV road tax from €2300 per annum to the EU average of €900 per annum, and introduce an Irish HGV Eco tax , which foreign as well as home based vehicle would operate.” he said.

According to Vialtis Group, which has 6,000 haulage clients in more than 40 countries across Europe, vehicles registered outside of France must be fitted with on-board equipment used to calculate the charge.

Calculate the new French tax here, according to Vialtis Group.