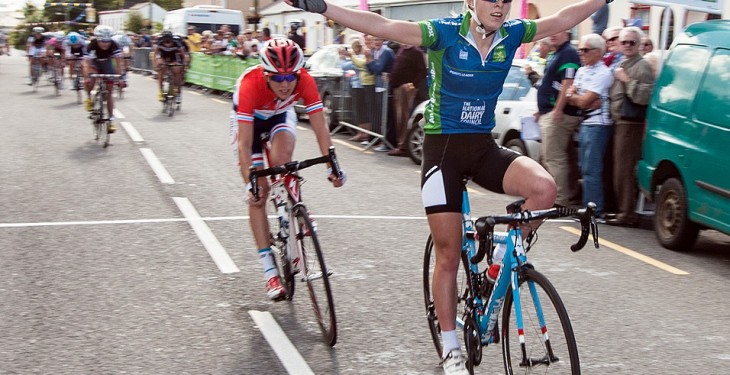 Pictured is last year's NDC Points winner Hannah Barnes of the UK who won three stages and has since moved to top US professional team United Healthcare.

The National Dairy Council (NDC) has announced that it will renew its support of Ireland’s premier women’s stage cycle race, Rás na mBan.

For the second year in succession, the NDC will support the points competition in September’s five-day, six stage event based in Co. Clare.

This year’s points competition will again reward the most consistent finisher in each of the road race stages where a fast finishing kick is often the best asset.

“The benefits of milk and dairy as part of a balanced diet is an important message promoted by The National Dairy Council, as well as recognising that a balanced diet should go hand-in-hand with an active lifestyle,” said Caroline O’Donovan, Nutritionist, NDC.

“From recreational sport enthusiasts to elite athletes; the ‘milk, yogurt and cheese’ food group can provide a natural source of important nutrients, such as calcium and protein, and these foods are easy to include across many meal times and snacking occasions.”

She also said that research is also pointing to a positive role that milk may play in a number of aspects of sports nutrition, with research from Loughborough and Northumbria Universities respectively demonstrating the potential effectiveness of skimmed milk as a re-hydration drink after exercise; and the beneficial role milk and milk-based products may play in recovery from exercise-induced muscle damage.

Preparations for this year’s event are at an advanced stage with four tough road stages, an individual time trial and a flat circuit race set to test the all round abilities of Ireland’s and Europe’s top road racers.

International interest in the event is at an all time high with teams from the US, mainland Europe and the UK already confirmed and getting set to join the cream of Irish racing talent on the challenging roads of Clare’s Atlantic coast.