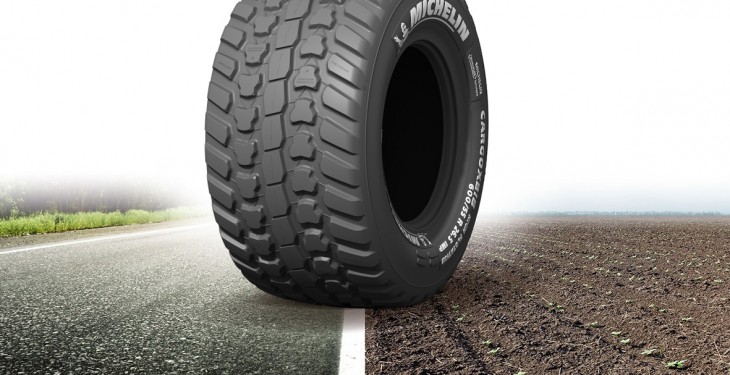 Michelin, Ireland last remaining tyre manufacturer, has expanded its range of farm tyres with the unveiling of its CargoXBib high flotation unit for use on trailers and other items of farm machinery.

According to Michelin, using its new Ultraflex technology, the tyre is designed to deliver more grip and less soil compaction whilst operating at lower than standard pressures – as low as 0.8 bar in the field and as high as 4 bar on the road.

Michelin says its introduction is a response to changes that see farmers spend almost as much time travelling on roads and concrete farmyards as on soft ground.

One key feature is its rounded shoulders that minimise ground cover damage whilst offering greater resistance to wear and cargo shifting during road use. Multi-angle, non-directional tread blocks wear more evenly and give good grip on sloped ground.

It joins a growing line-up of Michelin farm tyres that includes their AxioBib and XeoBib tractor tyres, CerexBib harvester tyres and SprayBib fitments for sprayers.

Earlier this year Michelin released the world’s largest tractor tyre. Although it is unlikely to be a familiar sight on Irish roads for the reason that our farms are insufficiently large to require tractors big enough to use it.

Manufactured by Michelin with the title AxioBib IF900/65R46, it was developed for machines like the New Holland T9 and Deutz Fahr Series 11 tractors with their 350 to 440 horsepower and Krone’s next generation combine harvester with its power output of more than 1,100 horsepower.

To maximize its footprint without compacting the soil, it can operate at pressures as low as 0.8 bar.