Larger EU budget called for – ‘to protect some EU regions’

Comments that EU budgetary resources need to be strengthened beyond the current levels, made by European Commission President Jean-Claude Juncker, have been welcomed by MEP and first vice-president of the European Parliament Mairead McGuinness.

Speaking at a high-level conference on the future of the EU budget, ‘Shaping our Future – Designing the Next Multiannual Financial Framework’, Juncker rejected the view that all member states are recipients from the budget.

“President Juncker is ambitious for the future of the EU budget acknowledging that the budget needs to be strengthened not weakened,” McGuinness said.

“There is a need to address new policy areas and new funding is therefore required,” the MEP noted, highlighting pressure on increased expenditure from a number of fronts such as general migration and border protection.

There may also be a need for additional funding to protect some EU regions against losses arising due to Brexit.

“Raiding existing policies to fund new ones is not acceptable. There are concerns that there will be pressure on the budget for the Common Agriculture Policy, at a time when additional demands are being made on the policy and on farmers.”

Brexit could result in a gap of at least €9 billion per year, the Midlands North West MEP warned.

However, the extent of the shortfall will be determined by the policy areas which the UK might continue to be part of and could contribute financially to.

The commission president said the remaining EU members would have to pay more to finance existing and new priorities and urged member states to move away from the current ceiling of 1% of economic output.

“I support his comments that we need more than 1% of European GDP, if we are to pursue new and existing EU policies and fund them adequately.

“The EU needs to set out its priorities for a stronger Europe and make funds available to match that ambition,” McGuinness added.

Total annual economic output of the EU is roughly €20 trillion, or €17.5 trillion, excluding the UK. The current EU budget is €160.1 billion. The next Multiannual Financial Framework will run from 2020 to 2027. 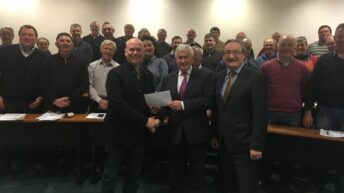