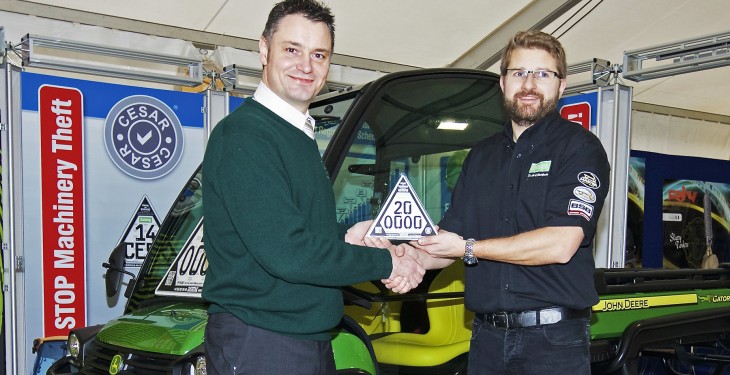 All new John Deere Gator utility vehicles can now be equipped with the nationally approved CESAR security and registration system from Datatag ID Limited, as a factory fit option.

An XUV 855D model was unveiled on the CESAR stand at LAMMA 2015 in January as the scheme’s 200,000th registered machine. The system is now being offered on Gators following its success in reducing tractor thefts from dealers and customers, and has exactly the same functionality as on the John Deere tractor range.

Supported by the Agricultural Engineers Association (AEA) and the Construction Equipment Association (CEA), CESAR is fitted on production lines in the UK, Europe and the USA by many leading manufacturers. The system was established in the construction market in 2007 and adopted by the agricultural market two years later, with the AEA’s support.

It works by giving each piece of equipment a unique and permanent identity using state of the art Datatag security marking technology. This cannot be removed by thieves, and is linked to a secure, 24/7 dedicated call centre. Since 2007, CESAR has reduced overall equipment theft in the UK by 46 per cent, increased the rate of recovery of stolen equipment by a factor of six, and also helped reduce insurance premiums.

“When we launched CESAR back in 2007 we could not have conceived of its success in being adopted by leading manufacturers and in reducing theft. I’m also extremely pleased that John Deere has decided to expand its support of CESAR and introduce it as an optional factory fit for its utility vehicle range. I have every confidence that this will be as successful for Gators as it has been for John Deere tractors.”