Is robotic milking the future for Irish dairy farming?

Against a backdrop of long hours and difficulty sourcing labour, a growing number of Irish dairy farmers are turning to robotic milking.

Sean Kennedy from Attanagh, Co. Laois, said that the stress that comes with running a dairy enterprise, particularly every spring, is alleviated by the robot on his 100ac farm.

Now into his second year of robotic milking, he said it has made running the farm more manageable. “I was finding the workload was getting that bit harder every spring between calving and milking, as well as doing general work around the farm,” he said.

“I would have got in help the odd day but wouldn’t have it continuously,” said Kennedy who has a herd of 56 British Friesians, with an average of 2.7 milkings per day.

“I was thinking about robotic milking for a couple of years. The old milking parlour was in need of an upgrade. I was looking to put in more units and improve it, but then I started looking at the robot very seriously.

I was milking cows for a good few years and was looking for an alternative way of doing things. The TAMS grant helped.

He was able to fit the robot into an existing shed. “I had a good bit of work to do. I had to dismantle the old parlour and make provision for a central unit; an office; and the robot,” he said.

“I left part of the old parlour as a place to draft in cows, to have a place for treating them.

“I also spent a bit on work outside, putting in slatted tanks to keep the area clean. Automatic gates were put on the tank, to fit in with the grazing system,” he said. 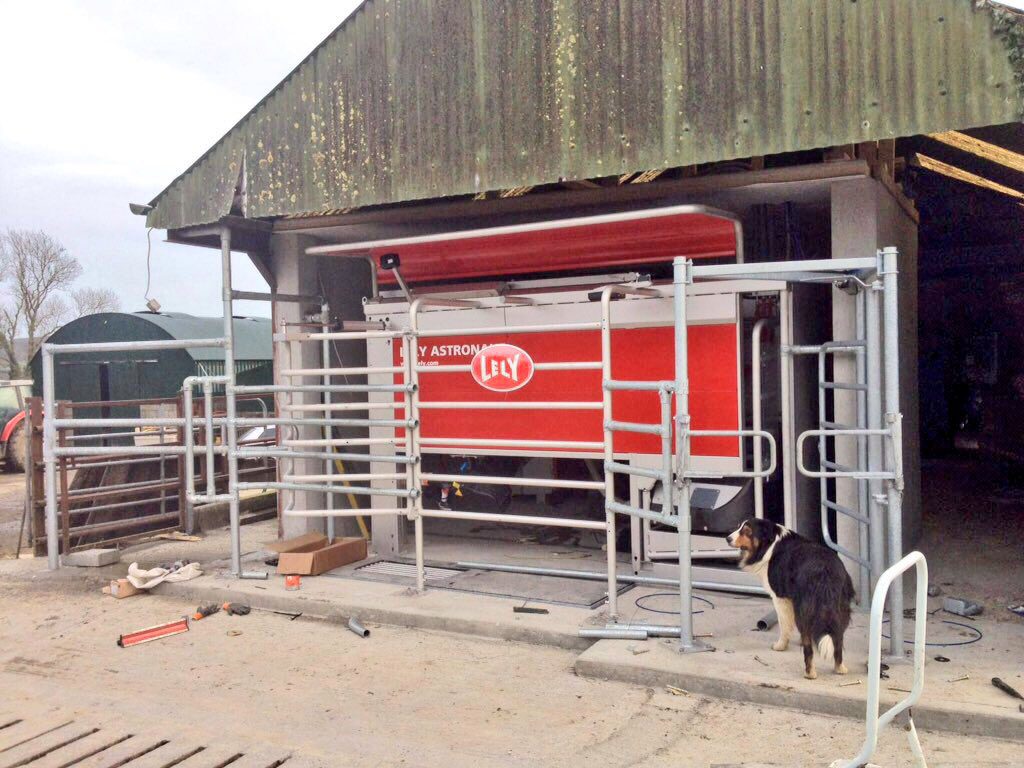 “The robot was up and running within a week. Preparing for the installation was the hardest thing.”

The new operation took time to get used to, Kennedy said. “The first six months were hard going as it was all new to me, but you get confident with it. Young people will adapt to it very quickly.

It also takes time to get the cows used to it. 90% of them adapt to it very quickly. You have to have patience with the heifers.

The robot has made a difference to his life, said Kennedy. “You are not so tied down. You get to enjoy a quality of life. You can go to town or somewhere in the evening and you’re not looking at your watch.

“You’re still busy at this time of year, doing things like managing sick animals and spreading manure, but you’re not racing to do it and going around like a headless chicken as you would have been doing previously.

If you want to lie on for an extra half hour after being up with calving, you can do that.

“Another advantage is the access you have to performance on protein and fats. Everything is tracked which gives you great insight,” he said.

“Some lads think you’re on holidays when you have a robot. It takes away the milking from you but you still have to keep an eye on the herd; change filters; keep the yard clean; and fence.

“You still have to be hands-on but the robot takes away the big pressure.

“It works well if your land is around the parlour,” he said.

Additional running costs, Kennedy said, include electricity and maintainance. Broadband also has to be upgraded and brought to the farmyard. “The investment was worth it, compared to building a new parlour on a greenfield site and for the free time it gives me.”