In the latest report from the Livestock and Meat Commission (LMC), Irish heifer prices continue to rise compared to other EU prices, reaching the top-five highest in April.

In the Republic of Ireland the price for an R3 heifer was 399.2c/kg in the week ending April 9, which was an increase of 13.8c/kg from the 385.4c/kg paid in the week ending March 12. This brought Ireland up to fifth place in the overall EU standings, compared to eighth place in mid-March.

This rated the Irish price at 15.1c/kg above the EU average and 9.6c/kg lower than the equivalent price in Northern Ireland.

The LMC also noted that the Euro had decreased to 85.5p – in the week ending April 9.

Also Read: Irish heifer prices continue to close the gap on those on offer across the UK

In the week ending April 9, Northern Ireland rose from fifth to fourth place in the EU league table. 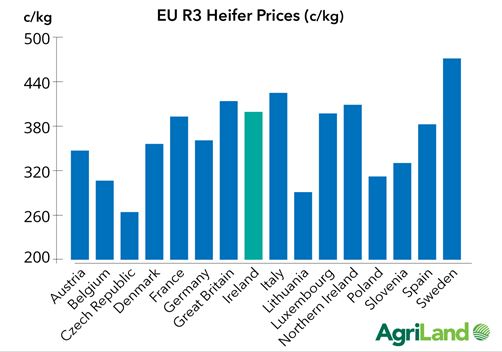 Britain ranked third overall in the league table in the week ending April 9, with an equivalent R3 heifer price of 413.7c/kg. This was a gain of 3.7c/kg from the 410.3c/kg price of the week ending March 12.

The difference between Britain and Ireland in terms of price was 14.5c/kg for equivalent R3 heifers. By the same measure, the price gap between Northern Ireland and the UK was 4.9c/kg.

In practical terms, this equates to farmers from Northern Ireland and Britain earning €26.88 and €40.60 respectively, more than farmers in the Republic of Ireland for a 280kg heifer carcass.