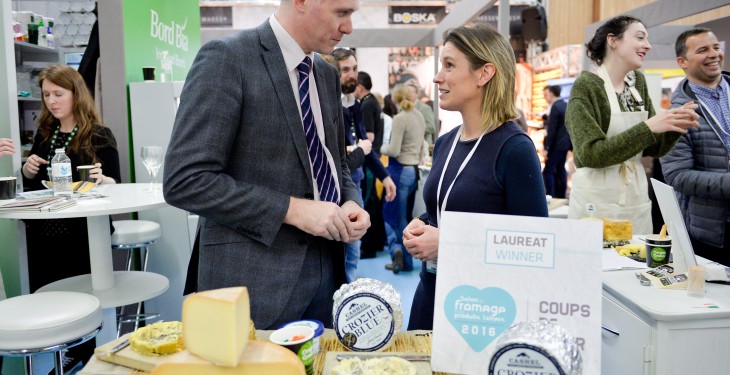 Bord Bia has said that the prize was awarded to eight exceptional cheeses, following a blind tasting test by a jury of nine chefs and cheesemongers.

The winners were selected from a total of 72 entries from 30 producers.

The trade event ran from February 28 until March 2 and showcased 190 artisan dairy producers from 12 countries.

Over 6,000 buyers and visitors, primarily French, were expected to attend the event over the four days it ran.

In addition to providing market insight and logistical support, Bord Bia arranged meetings with buyers for the seven Irish companies participating at the event.

All exhibitors were situated on the Ireland – Origin Green stand and Bord Bia also hosted a trade reception on the stand for up to 100 guests to further develop relations between the Irish cheese makers and French buyers.

According to Bord Bia, Ireland has the second largest non-French presence at the show.

Noreen Lanigan, Bord Bia Manager for France and Belgium, has said there has never been a better time to introduce French buyers to Irish farmhouse cheese.

French cheesemongers now stock on average 16 foreign cheeses from their total selection of 130, representing around 10% of their turnover.

“According to new trade research [carried out by Salon du Fromage ahead of the event], over 30% of cheese shops intend to increase their range of imported cheese.

“This is already translating into a significant increase in Irish artisan cheese imports to France, which have trebled since our presence at the Salon two years ago and now amount to approximately 18t per year.”

Lanigan added that Salon du Fromage was the ideal opportunity to introduce new products to buyers and this year, Cashel Blue Organic, Garlic Oil flavoured Goats Cheese from Knockdrinna, and Irish Organic Cream Cheese from The Little Milk Company, were launched for the first time at the show.