The growth potential of United Arab Emirates (UAE) dairy market has been highlighted by Bord Bia.

“It is valued at €225m at retail level and has been growing at an annual rate of about seven per cent per annum. Local supply accounts for 80 per cent of product on shelf while imports, mostly from Saudi Arabia, make up the remainder,” he outlined in its weekly food alert.

He continued: “Foodservice sales account for nearly one third of the total. The bulk of this is UHT milk supplied into chains such as Starbucks, Costa, institutional contracts and airlines and so on. This is expected to grow strongly in coming years with the growth of the tourist industry in the UAE. Total consumption is expected to grow to 328 million litres per annum by 2017, giving another 50 per cent growth in consumption.”

The table below, courtesy of Bord Bia, details total local consumption by product category, the percentage which is produced/processed locally and the percentage of the locally produced product that comes from recombining.

For example, yogurt consumption totals 85,834 tonnes per annum of which 80.6 per cent is produced locally in the UAE. Of this, 32 per cent or 22,415 tonnes is produced from recombined powders and this is growing at 4.7 per cent per annum.

According to Hussey: “The table also shows that with growth rates in the high single figures for many products that are produced from recombined powders, there are significant opportunities for Irish dairy ingredients exporters to capitalise on this growth in the years ahead as local production will not be able to keep pace with the growth in consumption.”

Just last week Bord Bia announced plans to open an office in Dubai, which it said will focus on Saudi Arabia, UEA and the Gulf States, as well as monitoring potential opportunities in Iran, Iraq and Jordan.

The agency said the office, which is likely to be located alongside other Irish development agencies based in the market, will support the Irish food and drink industry’s efforts to double exports to the Middle East by 2020 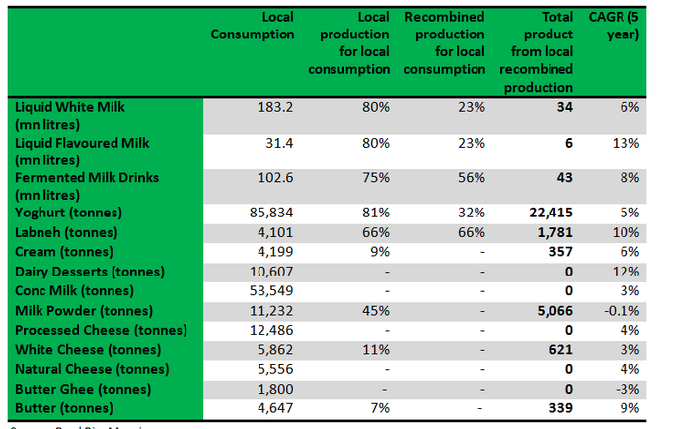