Ireland has dropped to fifth place on the EU cattle prices league table, down two places from last month, according to the Livestock and Meat Commission (LMC).

This latest cattle price for the Republic places it 14.1c/kg above the EU average price of 400.2c/kg.

Northern Ireland retains its second place spot on the cattle prices league table. For the week ending August 16, the average R3 heifer price was the equivalent of 462.0c/kg; down 25.4c/kg on the price paid in the week ending July 19.

These latest cattle prices from the Republic and the North now places the North/South price differential at the equivalent of 47.6c/kg, the LMC says.

Despite the drop, the UK still holds onto its top spot on the league table. 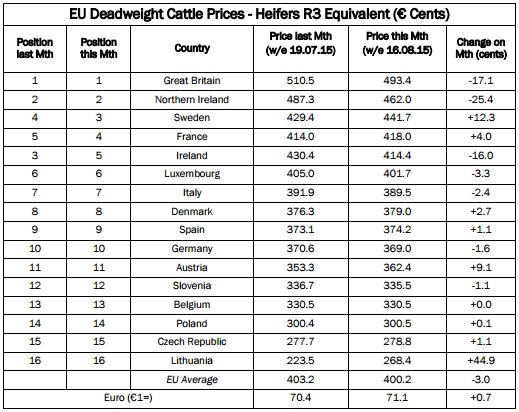 It says that other continental markets remain weak and says Irish prices for finished cattle are at 110% of the EU average price.

Why the factories don't want a repeat of the beef crisis