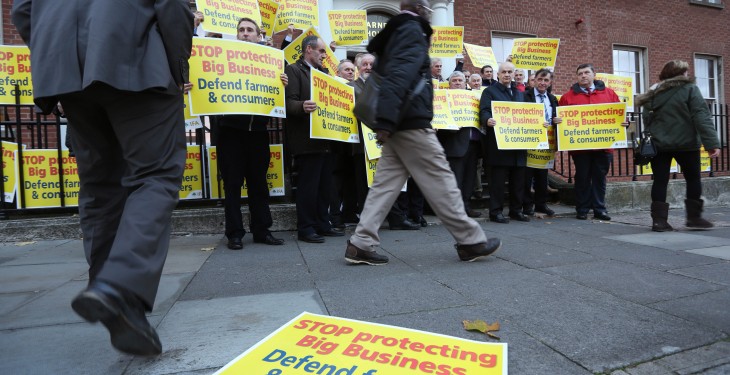 The IFA has moved its protest to the doors of the Competition and Consumer Protection Commission in Dublin today.

After a meeting of the IFA Executive Council today, the council moved to protest outside Competition and Consumer Protection Commission doors.

IFA President Eddie Downey said the intervention by the Commission in the beef dispute has greatly angered farmers and convinced them that the Commission is only interested in protecting big business that are denying farmers a fair return from the market.

“Farmers have a legitimate right to protest and IFA will continue to assert our right to protest on all issues, whether these are cattle prices at the factories, below-cost selling of potatoes and vegetables by retailers or policy issues at the highest political level.”

The IFA President said the tone and timing of the Commission’s letter and press release have ensured that the newly merged agency has got off to a bad start with farmers, exhibiting precisely the same bias in favour of big business, i.e., retailers and processors that we saw from the outgoing Competition Authority and the National Consumer Agency.

At a meeting in Dublin today the IFA Executive Council unanimously rejected what farmers see as the Commission’s partisan intervention on the side of the meat factories, at a time when the factories are under unprecedented public scrutiny and pressure over the unjustifiable price gap they have created between Irish and UK cattle prices and their failure to pass back increased market returns to farmers.

“As farmers see it, the Commission is more interested in protecting the factories, than in ensuring any real fairness or genuine price competition in the beef trade for farmers,” said Eddie Downey.

The IFA President said it is a matter of fact that the Commission’s predecessors have a poor record in their dealings with farmers in all sectors, with no action taken to curb the power of retail multiples which are exerting constant downward pressure on farm-gate prices in many cases below the cost of production.

He said the National Consumer Agency clearly supported the race to the bottom on producer prices last Christmas when it welcomed the retailers’ outrageous 5c/kg give-aways of Irish vegetables.

“The NCA couldn’t care less about the vulnerability of the dwindling number of Irish growers at the most important time of their marketing year. Nor did they take any action to protect the interests of consumers and producers in regard to the blatantly misleading labelling of pork and bacon products.”

Eddie Downey said the Competition and Consumer Protection Commission has serious questions to answer on their failure to act and investigate the inequity in the food chain and the power of the retailer multiples and big business, and how they use this against farmers and small suppliers.

“Why has the Commission not acted to investigate the inequity in the food chain and widening gap between the price the consumer is paying and the price the farmer is getting?

“On beef, why has the Competition Commission intervened on the side of the beef factories in a protest by farmers who are only looking for a fair return from the market?

“Why hasn’t the Competition Commission investigated why Irish farmers are getting up to €350 per head less for their cattle than their counterparts in the UK?

“Why has the Commission not investigated the retailers over the way they forced the collapse of retail prices on vegetables last December?”

Eddie Downey said the Competition Authority previously raided farmers in their homes and launched investigations into their representative organisation, but has failed abysmally to direct their investigative resources to probe the activities of big business such as the retail multiples who dominate the supply chain.