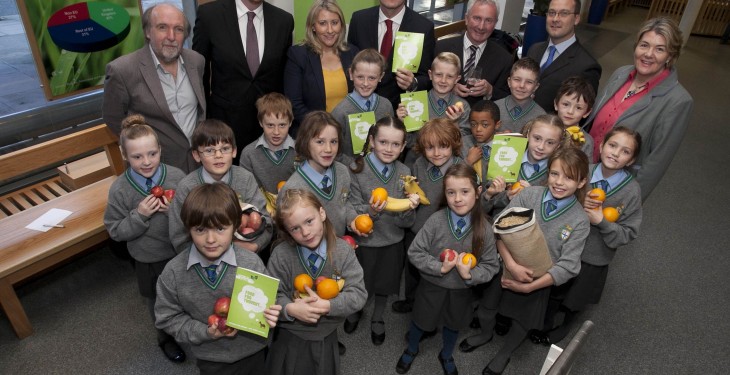 A ‘World Food – Facts, Figures and Activities’ booklet to mark United Nations World Food Day was launched by the Minister for Agriculture, Food and the Marine.

The booklet is aimed at raising awareness amongst school children of the serious challenges faced by the world’s poor while highlighting the real potential in these countries if they are provided opportunities to develop their agriculture production in a sustainable manner.

In launching the booklet Minister Simon Coveney underlined the role Irish agriculture can play in reducing world poverty and hunger. “Ireland as a major food producer and a leading innovator in agriculture technologies can make a significant contribution to tackling global hunger. Whether it is the continued production of sustainable products, enhanced cooperation with poorer countries, partnerships between Irish companies and companies in developing countries there are many ways for Ireland to continue to make a valuable contribution.’

The booklet is the result of collaboration between Department of Agriculture, Food and the Marine, Gorta, Agri-Aware, Concern, Junior Achievement Ireland and Irish Aid.

Gareth Crowe, community fundraising manager  at Gorta said: “Gorta as an NGO with close relations with the Food and Agriculture Organisation, has been associated with World Food Day since its inception. I am delighted that 2013 is the year when collaboration with the Department of Agriculture, Agri Aware and others has allowed us to produce an excellent document such as this which will bring the message of World Food Day to a national audience.”

Agri Aware’s Dr Vanessa Woods said World Food Day wasn’t just a celebration of culture and nutrition, nor is it solely a way to address world hunger. “Increasingly, rather, it is about education – teaching young people about food origin and sustainability, to ensure a safe supply of food for the years and future generations to come.’

Dominic MacSorely, CEO of Concern Worldwide said the booklet demonstrates the type  of approach needed to end world hunger, with Government and State bodies, NGOs and the private sector all working together. “Concern is delighted to join this partnership and hopes that primary students all over the country will enjoy the booklet and learn a great deal from it.”

Helen Raftery, CEO of Junior Achievement Ireland said it was delighted to collaborate with the department and all the agencies involved in promoting World Food Day in Ireland. “By joining with our friends in Junior Achievement Uganda to relay the stories of one Irish and one Ugandan student who tell of their involvement in food production, we hope the students’ message of the importance of working hard in school and the enjoyment our writers get from their work in food production resonates with younger readers.”