AgriLand visited New Holland’s factory in Basildon (England) this week, to find out how its methane-powered tractor project is progressing.

The manufacturer intends to make these novel machines available to buy within the next three years.

But why methane? Why is New Holland investing so much time and energy in such a project?

So, in this area, New Holland most probably has a sizeable lead on many other tractor manufacturers.

Also, ‘sustainability’ seems to be a major buzz-word in New Holland – and the wider CNH family – these days; a methane-powered tractor fits in well with this aspiration – certainly at a corporate level.

Who would buy such a tractor? Who are the likely early adopters? Mark Howell, New Holland’s global product manager for alternative fuels, explained: “We see farmers or farming companies, with access to gas [methane] produced on-farm [i.e. through anerobic digestion], as the main buyers.

“In these cases, the tractors would be part of what we call ‘Energy Independent Farms‘.

That’s where it makes a lot of financial sense; you can make big savings on your running costs.

“We also expect interest from, say, large vegetable-growing companies, where the need to show evidence of ‘sustainable’ practices and technology is important.”

Mark said that no final decision has been made with regard to the tractors’ likely asking price, but he did hint that there would be a premium over diesel-powered equivalents – suggesting that it could be 10% or less.

While production runs (for a market roll-out in three years time) will initially run to hundreds rather than thousands of units, Mark did say that a certain economy of scale will be needed – to make the project work. 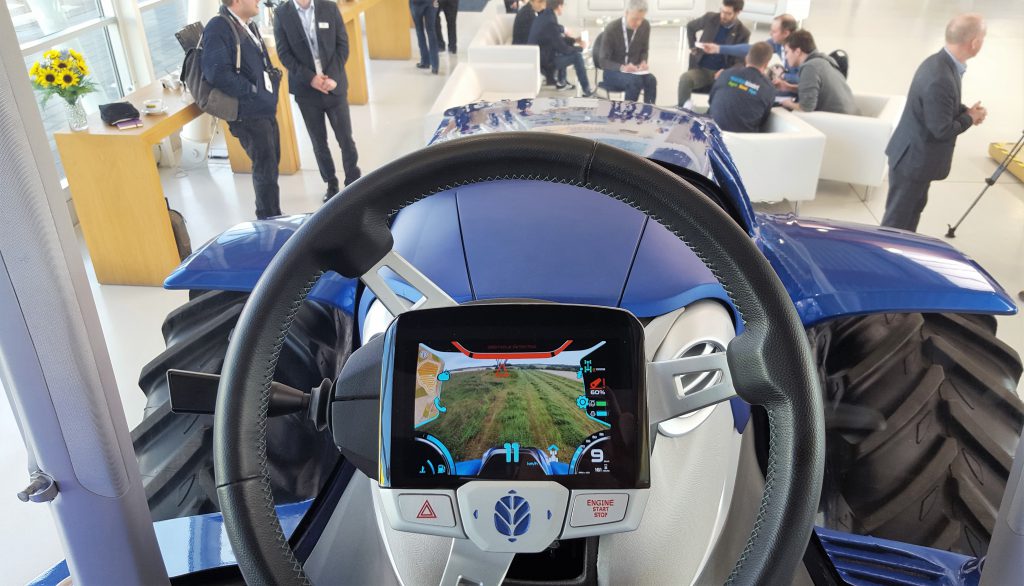 He said: “There is no point, of course, in building ‘one-offs’; for this to work these [methane-powered] tractors will eventually be built on the same production lines as our other tractors.”

How long can it run?

Current prototypes can typically run for five or six hours (of constant use). Extending this means fitting bigger ‘fuel’ tanks.

“We’re looking at all sorts of possibilities,” explained Mark. “Why not, for example, have additional tanks on an implement behind the tractor? It’s easy to move methane from one point to another.”

Toying with the concept

New Holland is no stranger to toying with alternative fuels; in 2009 it unveiled what it described as “the world’s first hydrogen-powered tractor concept” (pictured below). 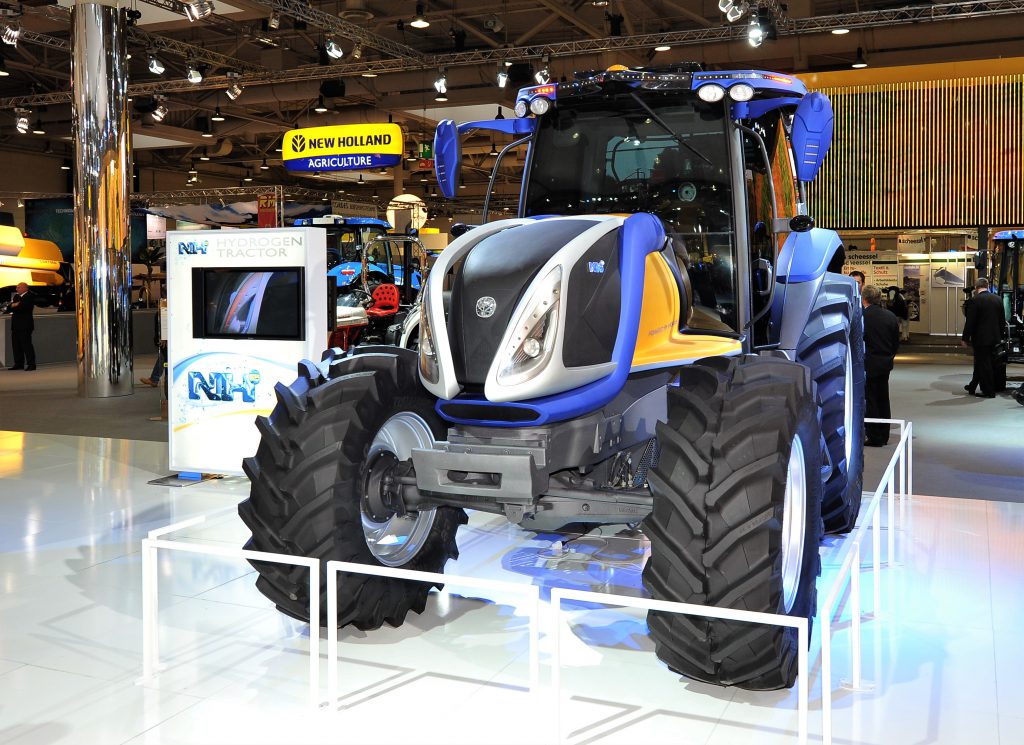 Its first-generation, methane-powered prototype broke cover in 2013. It, along with other prototypes, has been undergoing field-testing ever since. 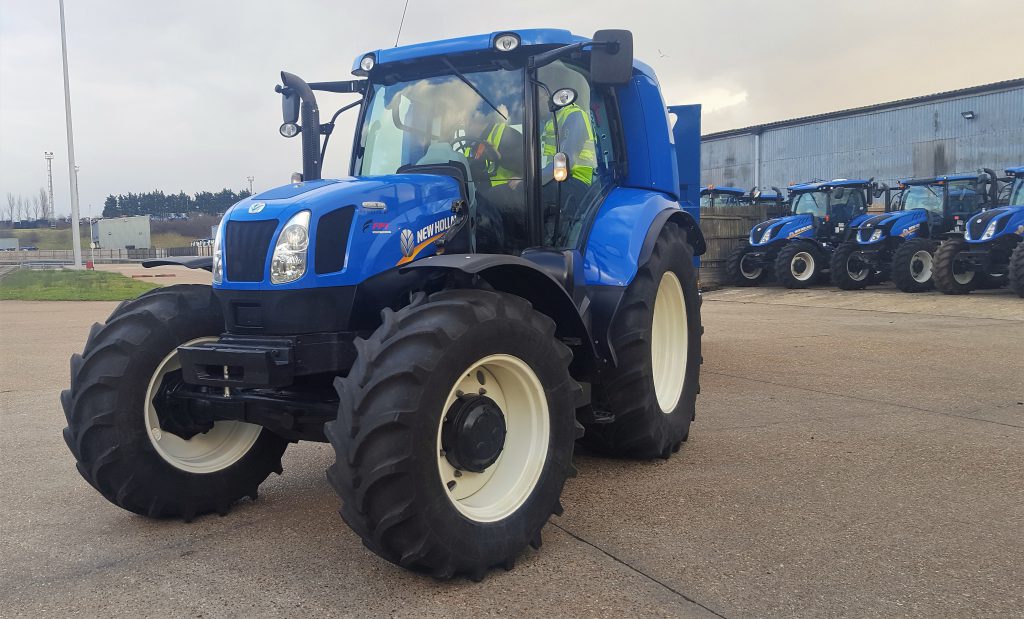 New Holland now seems content with the notion of methane-derived power – citing its “extra-low” particulate matter (apparently reduced by a whopping 99%) and lower CO2 emissions (reduced by 10%) – along with the ability to produce it from renewable, on-farm sources.

Mark says that a methane-fuelled engine – and, consequently, a methane-powered tractor – has similar durability and service intervals to its diesel-drinking counterpart. He claims that a 30% saving in running costs can be achieved – apparently seen during on-farm tests. 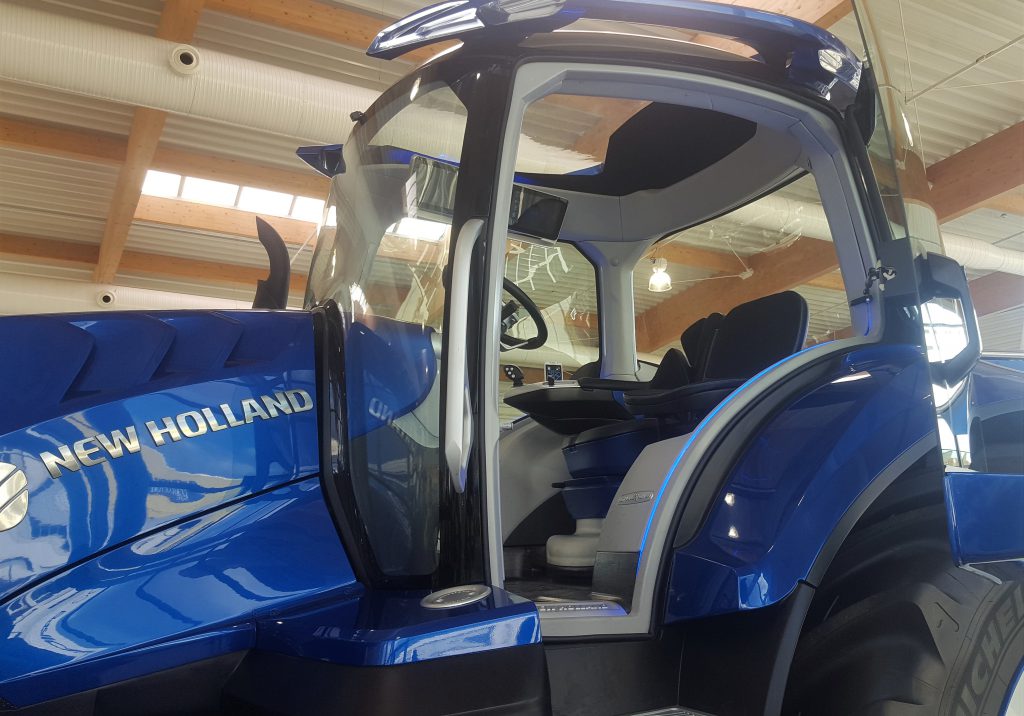 Three years hence, production-spec versions will be based on New Holland’s T6-size platform – most probably models equivalent to the current T6.155 and T6.180.

However, as is evident from the accompanying pictures (and pictures published last August by AgriLand), these tractors will look considerably more ‘futuristic‘ than current offerings.

Why not an electric motor?

Asked if we will see electrically-powered New Holland tractors (of this size) in the near future, Mark explained: “We’ve looked at many different systems; the difficulty with electric tractors is the weight of the battery that’s needed to generate sufficient running time.

“Imagine needing a 3t battery on a tractor in the 130-180kW range; then imagine having to charge it for eight hours to get one hour of hard work from it.”