Over the last ten years, retail sales of dairy products followed diverging trends in the EU, according to latest research from the European Commission.

Cheese retail sales increased by 7%, both in the EU-15 (older Member States) and the EU-N13, albeit at a much faster pace in the new Member States.

However, the Commission says cheese retail sales in the EU-N13 reached in 2015 only slightly over 5kg while it exceeded 9kg in the EU-15. By comparison, apparent consumption of cheese (including food services and industrial use) is estimated at 17.6kg.

Meanwhile, retail sales per capita of cream increased also steadily by close to 9% throughout the EU. By contrast, after a strong increase until 2011, yoghurt retail sales started decreasing sharply.

Concerning drinking milk, the trend shows a regular decrease of EU per capita consumption (-8% over the period), the decline was particularly sharp in the EU 15 (-10% or -6 l/capita) and not compensated by the 12% increase in EU-N13. 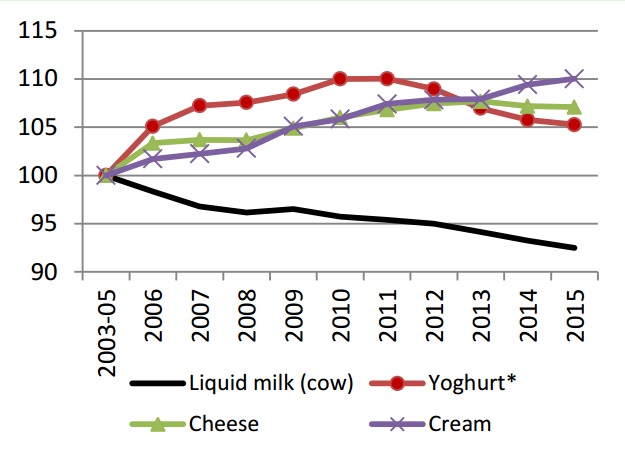 On the fresh dairy market, the declining trend continues, the Commission found.

The steady increase in exports of drinking milk (+19% in 2015 compared with 2014) is not enough to compensate for the decrease in per capita consumption.

Moreover, yogurt production remained stable in 2015 as in 2014, while per capita retail sales declined
slightly by 0.1 kg.