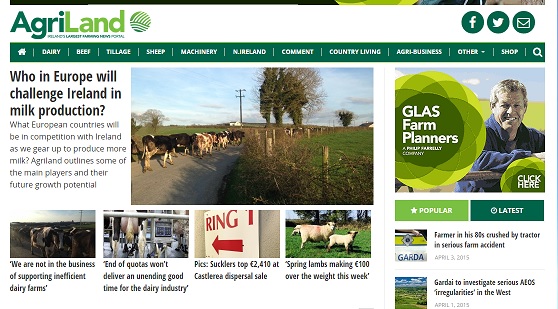 Farmers and the general public continue to migrate to consuming news content digitally in increasing numbers, according to latest figures released today.

The figures show that 720,000 people accessed newspaper titles online over the period.

Major titles including the Irish Independent and The Irish Times have both seen double figure increases in their online readership.

Farmers though are migrating to digital media in droves – at the cost of print. Readership of the Irish Farmers Journal print publication has fallen by 15.7% year-on-year.

This compares to increasing readership of the ‘Journal’s’ online offering – it increased its weekly online readership to 9,000, according to the Milward Brown JNRS figures.

The figures further re-enforce Agriland’s leadership in the digital farming news space – boasting 50,000 unique visitors per week to our site.

The figures clearly point to an exodus of farmers from traditional print media to online news, a trend that has coincided with Agriland’s entrance into the market just over two years ago.

Commenting on the figures, Agriland Editor, Margaret Donnelly said they are indicative of the continuing move towards online news sources as the first port of call for both farmers and the wider population.

“Agriland has forged out a really strong position in an industry that traditionally has been dominated by print media.

“In the two years that Agriland has been in existence, the demand from the farming community for digital content has grown exponentially.

“The team at Agriland has responded by continuing to develop and provide the best online agricultural news offering in the country.

“This is all based on an editorial policy of accurate news reporting, as well as bringing farmers a wide range of technical advice,” she said.

“Our app continues to be one of the most downloaded agricultural apps in the country.

“Our growth is affirmation that what we’re doing is both innovative and recognised – as more and more people continue to turn to Agriland for information and advice.

“And it’s all free,” she highlighted.

“We don’t believe that people should have to pay for news or content. The world of journalism is constantly evolving and readers should not be alienated with paywalls.”