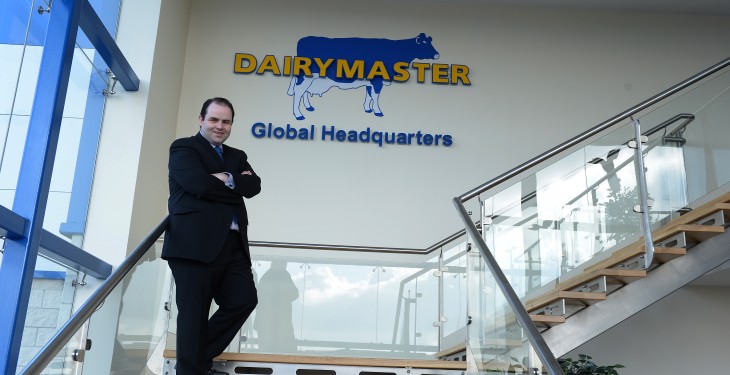 Speaking at the Global Forum for Innovations in Agriculture (GFIA) in Abu Dhabi Dr Edmond Harty, CEO of Dairymaster, highlighted the growing problem of bovine infertility and how his company is leading the fight to overcome it.

He pointed out that the fact that the global population will reach nine billion by 2050 allied to a drop in fertility in cattle could lead to widespread famine unless we act.

Key to the solution will be the use of wearable technology which allows each cow to be individually identified, monitored, milked, fed and medicated, he said.

“If you want a cow to produce milk she has to become pregnant,” said Harty. “But with fertility rates dropping, that is proving more difficult unless you know exactly when the cow is in heat. That’s what a device like our MooMonitor does, allowing the farmer to ensure that the cow produces as much milk as possible consistently.”

The drop in fertility among cattle has not been quantified, but is an accepted fact across the agricultural world. But even without that, the challenge of feeding nine billion people would be daunting enough, he added.

“Right now Dairymaster is not only tackling the fertility issue; we’re finding ways to use technology to increase yields across every part of the dairy farm,” said Harty. “If we can shorten production times, speed up growth and increase yields, even by a few percentage points at a time and we see that matched across the whole of food production we should be able to meet the challenge.”

He outlined a key Dairymaster example. By using a suction process that mimics the actions of calves more closely than any other, Dairymaster’s parlours typically produce five per cent more milk per milking and do so a minute faster, he said. Each cow can be individually tagged so Dairymaster’s feeding systems allow for the right mix of food and, if necessary, medication to be delivered to every cow in a herd, Harty explained.

According to Dairymaster, the company’s newest cooling and storage tanks have been designed to allow for milk to be kept at the optimum temperature with the minimum outlay in electricity. In fact, it says tests have shown that it will maintain the temperature to within 0.5 degrees centigrade for 24 hours if there is a power failure.

“Even the least attractive part of the parlour is important,” stated Harty. “Our scrapers have been designed to fit so precisely into farms that it reduces the amount of work involved and produces a more hygienic environment for the cattle and the operators.”