With the busy calving season on dairy farms winding down, AgriLand got the chance to check out a brand new calf housing facility on a 180-cow farm in Co. Limerick during the week.

The new calf house – which can house up to 150 calves (30 in each pen) currently but could hold up to 300 when all pens are set up – is on the farm of Pierce Breen from Oola who farms alongside his father Liam and mother Carmel.

The Limerick-native, like many other dairy farmers across the country, decided it was time to upgrade on the current calf housing facilities that were already on the farm.

Pierce is also a ‘go-to farmer’ on the Dairygold Lean Farm programme, so not only was he looking to build better housing facilities for his calves but he was also looking at how he could become more efficient and cut down on labour around the farm.

Speaking to AgriLand about his decision to build a new calf shed, Pierce said: “It came to a stage where I just had to bite the bullet and build new accommodation for my calves.

Up until this year, we had been housing our calves in old horse stables, which had quite a low roof and it was very labour intensive rearing calves in it.

“As well as that, when we had most of the cows calved we would make space in the calving area to house more calves in.

“So, it was time to upgrade. I put in a 20-unit new parlour four years ago and I felt it was time to add the finishing touch and build a new calf house.” 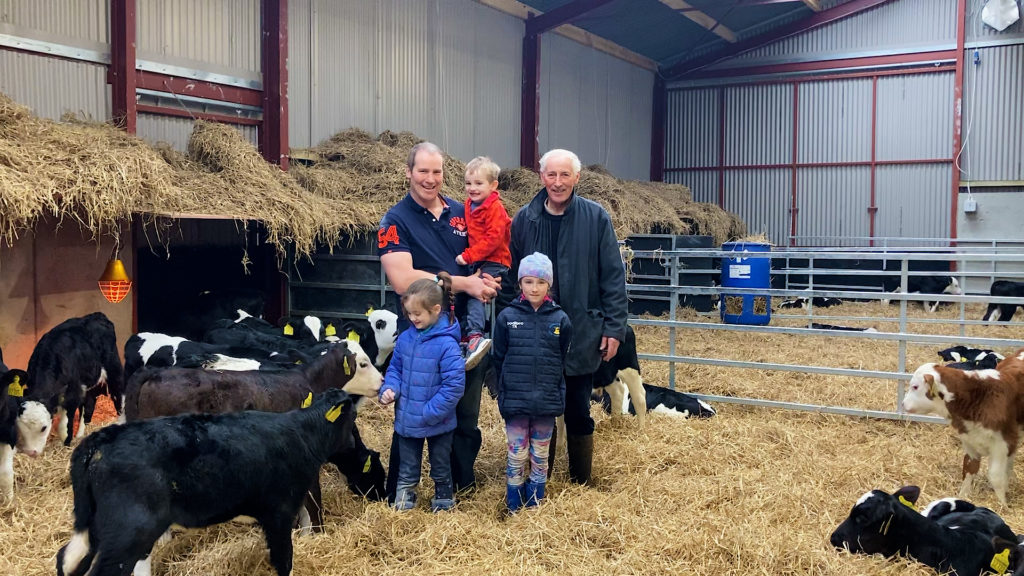 L:R: Pierce Breen with his children and his father Liam

The new calf housing facility is built right beside the milking parlour in what was once part of a paddock. The site was well below the level of the rest of the yard and required up to 10t of stone to bring it up to the required level.

Originally, Pierce didn’t plan on building the shed where it was, but after speaking to his Teagasc advisors, they told him to build it where its stands today in order to have access to a field for calves to come and go from the shed and also to cut down on labour. 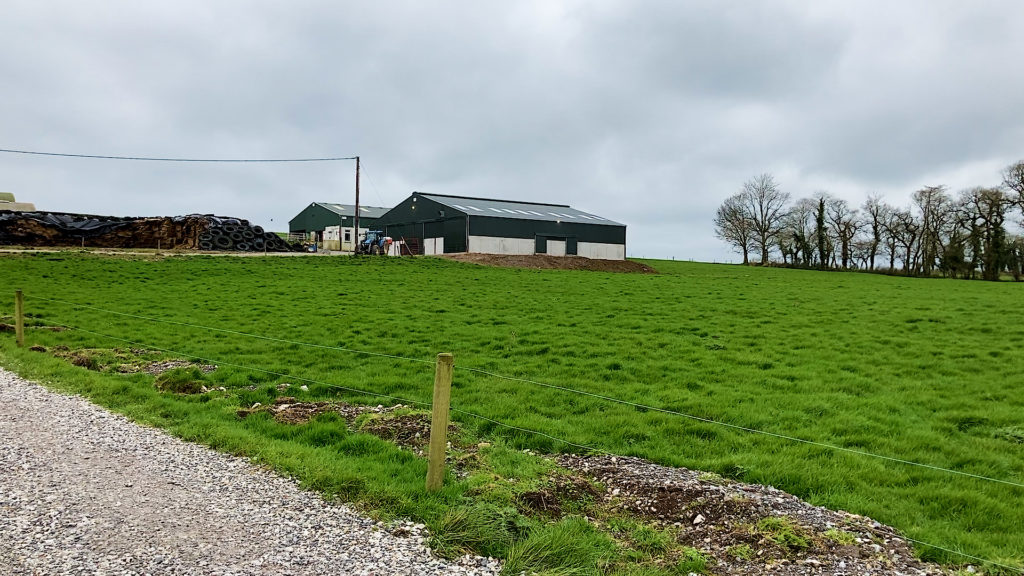 It was a quick turnaround, with work only beginning in the middle of January of this year, with the shed ready for calves a couple of weeks later in mid-February (3-4 weeks).

Pierce paid tribute to everyone involved in the build saying that everyone rolled up their sleeves and got it done in a short space of time and all to a very high standard.

The planning and design of the shed was completed by Martin Crowe. The shed was sourced and erected by O’Dywer Steel. The concrete work was done by CJW Civils.

The inside of the unit, including the gates, feed barriers, drinkers, troughs and all the stockboard for the gates and canopies were sourced and fitted by O’Donnell Engineering.

The ventilation system was installed by Jim Power, while the electrical work was carried out by Declan Beary.

The centre passageway is 4.45m wide and 23.8m long. Looking at the calf pens, there are five in total; however, because of the way it’s laid out, two, or all of the pens, can be turned into one large pen.

Each pen is 6.93m wide and 4.8m long. On the other side of the shed, no pens have been set up yet, but the plan is to have two more pens fitted for next year. At the moment, straw and machinery take up residence in this area, along with a washing area – which Pierce’s father Liam set up. 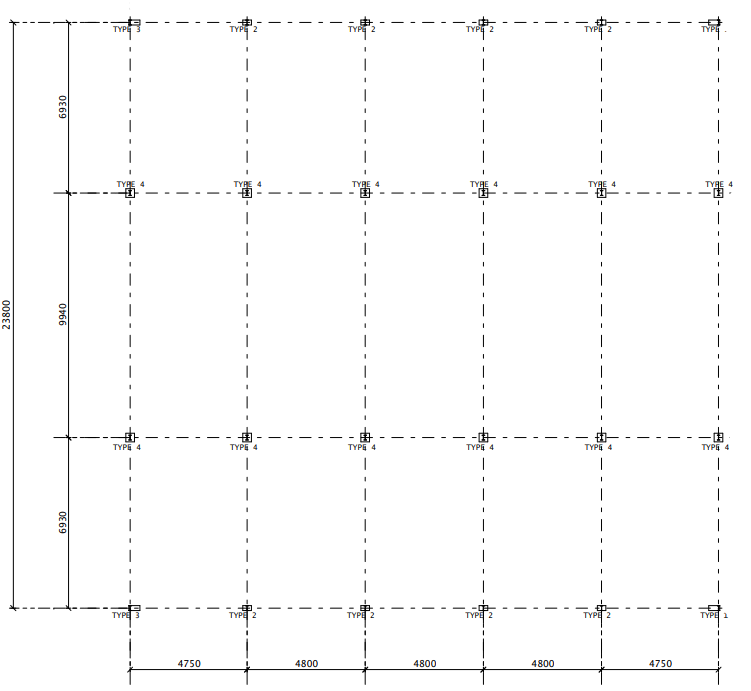 Looking at other calf sheds and getting advice

It really is as impressive a calf shed as you will ever see. Pierce explained that it’s a job you only do once, so you might as well do it right.

He went to the extra effort of ensuring his calves had the best possible environment to thrive in by going to see other newly-built calf sheds and by getting advice from his Teagasc advisors, John McCabe and Eoin Horgan and his local veterinary clinic. 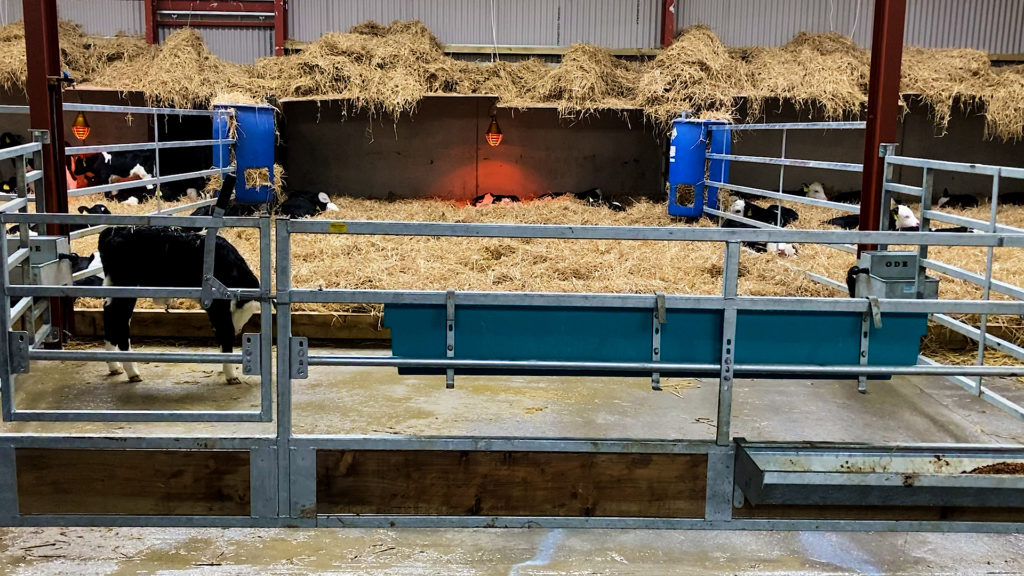 Pierce added: “I spoke to my Teagasc advisors John McCabe and Eoin Horgan who put me in touch with farmers who had built new calf sheds and they also organised for me to go down to Teagasc Moorepark to see the facilities they had down there.

From looking at other sheds and talking to farmers, I could take ideas home with me and put together what I wanted for my farm.

“They also gave me some advice on where I should build the shed and a few other ideas for the inside of it.

“Then after talking to Martin Crowe who designed the shed, I spoke to my local vet [Mulcair Veterinary] who gave me some advice in terms of optimising calf health. For example, they mentioned to me about putting canopies at the back of the pens to provide a warm and comfortable environment for the calves to lie under.” 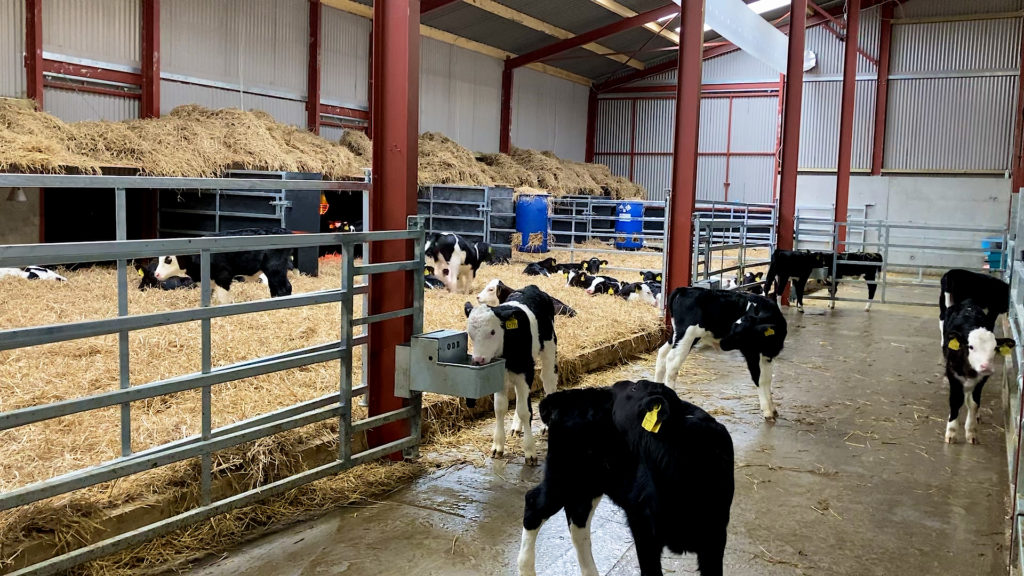 Taking a look at the inside of the shed, each pen can further be divided into two sections. The front section of the pen, where the calves are fed milk and meal consists of a bare concrete floor. The back section of the pens are bedded with straw and also contain a canopy.

Under each canopy is a heat lamp. Pierce said that the younger calves are drawn to this area straight away when they are moved to the shed and as they get older they tend to move out further towards the front of the pen. 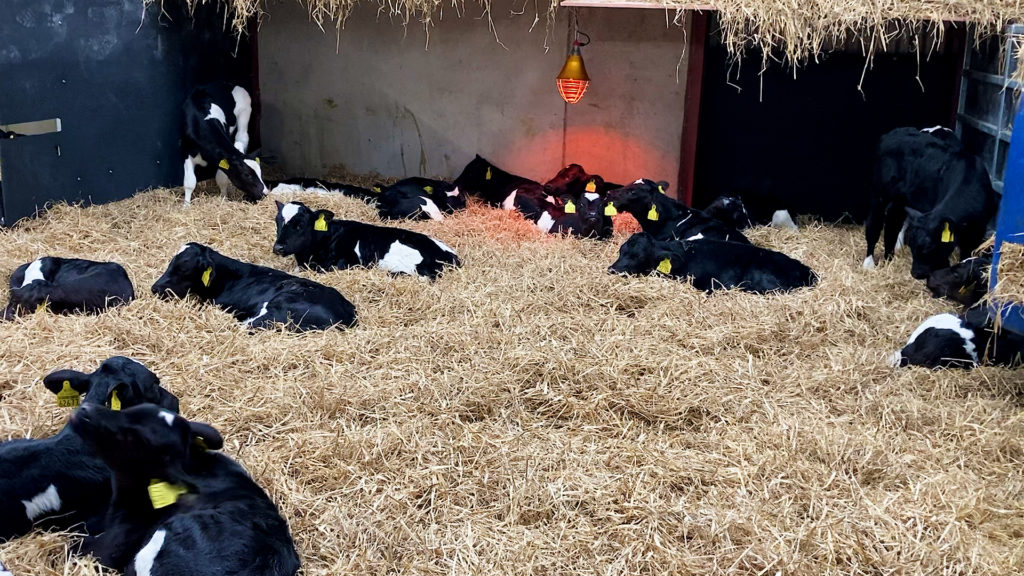 Calves lying under the canopy where the heat lamp is installed

Keeping calves warm and preventing draughts were priorities for Pierce. So along with the help of his vet, they decided against installing ventilated sheeting.

He added: “We were concerned, because it is a big shed, that the calves would be cold, so we went away from using ventilated sheeting and instead put in a mechanical ventilation system.

It’s great because it maintains the temperature within the shed as well as removing any stale air and it keeps the shed nice and fresh. 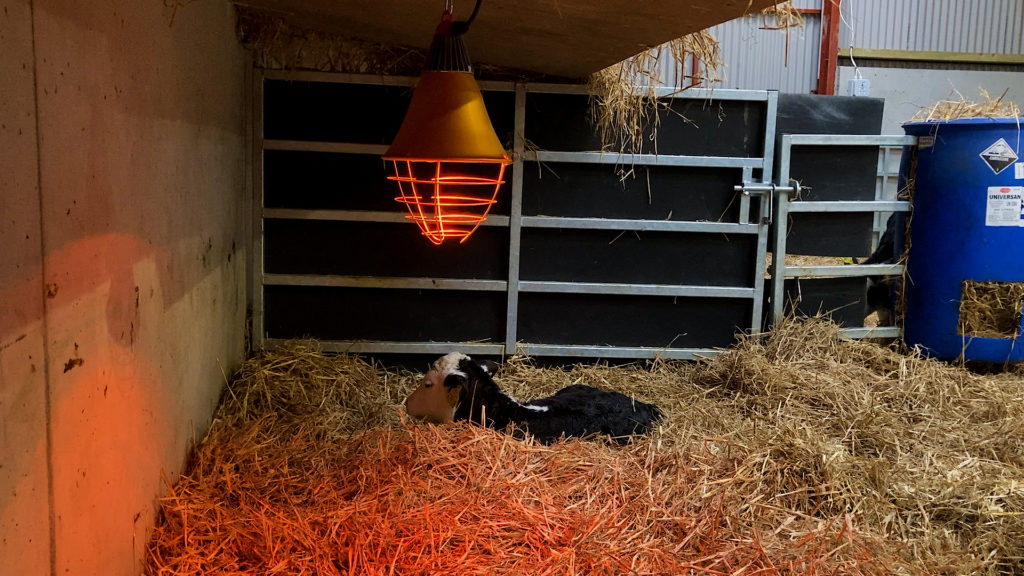 A calf under the heat lamp. Stockboard hung on the gates to prevent draughts

“I suppose going a step further, we put in heat lamps under the canopies, which are good, especially for the younger calves who go straight underneath them.

“We also put stockboard on the back gates where the canopies are to prevent draughts.” 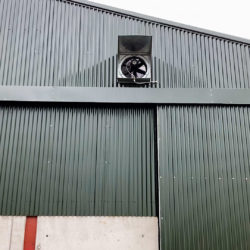 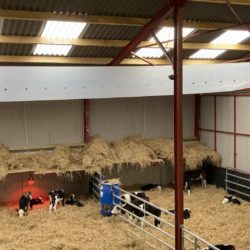 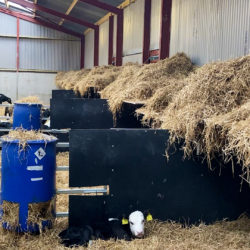 Also at the back of the pens are two small sliding doors that allow the calves access to the field.

In a few weeks, when the calves are a bit older, Pierce will open these two doors for the replacement heifers and the few bull calves he keeps to come and go from the shed as they please. 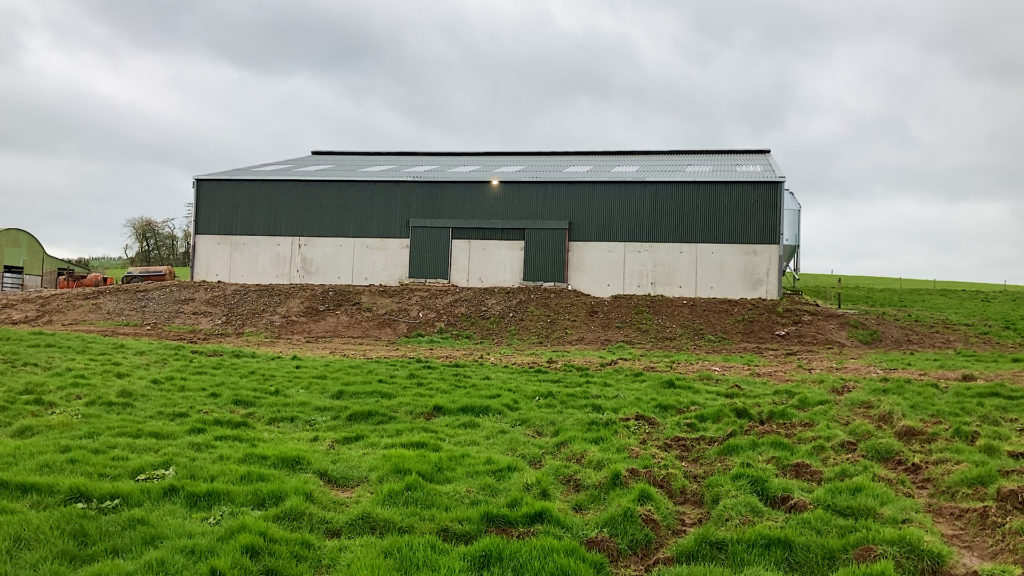 Another aspect of the design is that the calf pens can be split in two. So, e.g. if Pierce wanted to clean out the straw at the back of the shed, the calves can be locked in at the front section of the pens (as pictured below) and he can come in at the front of the shed with the tractor and front loader and clean it out in a short space of time.

Also, the canopies drop down and the gates swing back against the wall to make life easy when cleaning it out.

Looking towards the front of the pens and the main centre passageway, feed barriers, small drinkers and an automatic calf feeding system were installed.

Pierce’s mother Carmel is in charge of calf-rearing and gets help from her grandchildren with the daily job of feeding the calves. 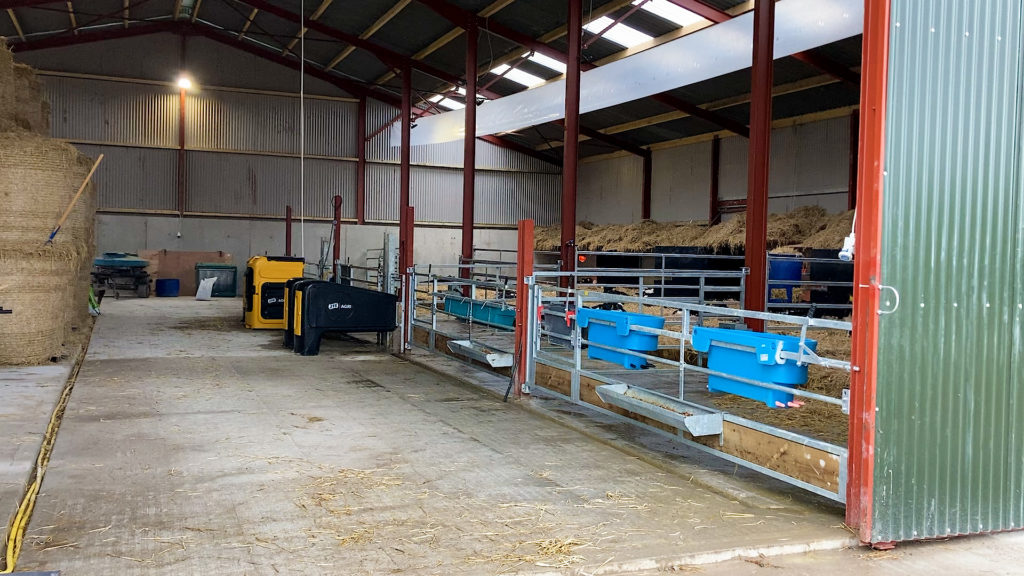 Speaking about feeding the calves and how he finds the automatic calf-feeding system, Pierce said: “My mother Carmel looks after the calves and does a great job with them. 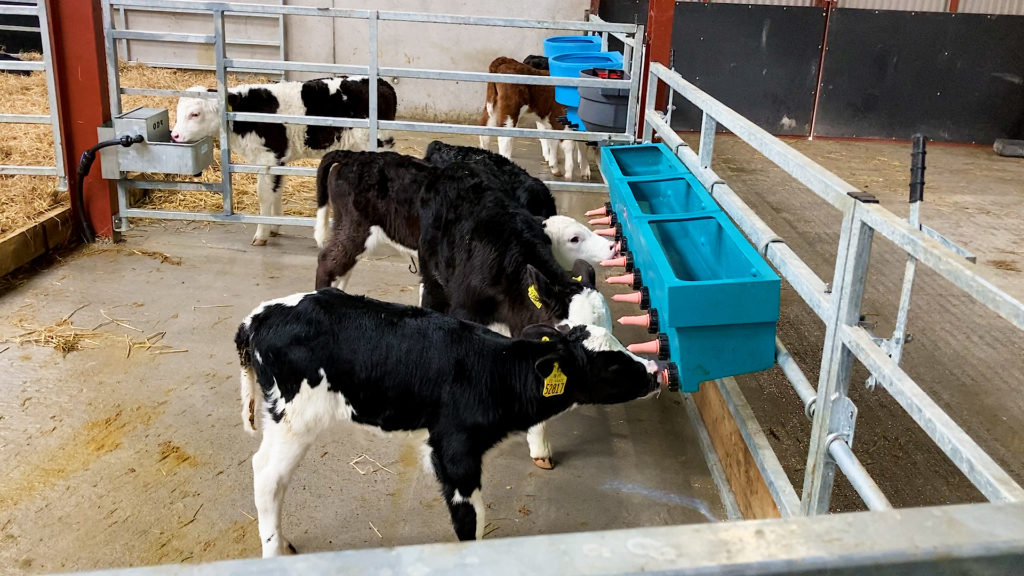 “We bought a JFC Evolution S4 four-station automatic calf feeder and we find it very good. Again, this time of the year is busy so we looked at where we could cut down on labour and the automatic feeders were a way of doing this.

“The information you get from it is great. It will tell me if each calf has drank its daily allowance and if it hasn’t and how much it has left to drink for the day.

“As long you keep it topped up with powder milk it works away on its own no bother. The calves have taken it no bother and to be honest, my kids know more about it and how it works than me,” Pierce joked.

“It can feed up to about 140 calves. At the moment, all the calves that we are keeping we have on them [automatic feeders], while the calves we are selling are fed using the standard feeders.” 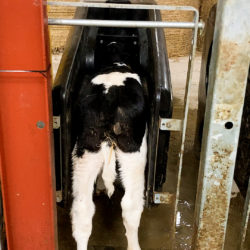 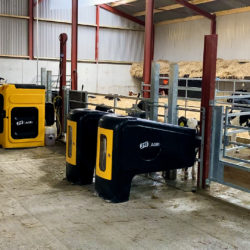 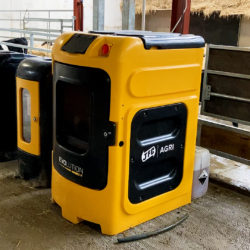 The way the front section of the pens is set up gives Pierce options when it comes to what calves can be fed using the automatic feeder. As you can see (from the picture below) the gate can be closed in three different positions, which is very handy if Pierce wanted to move one pen of calves onto the automatic feeders. 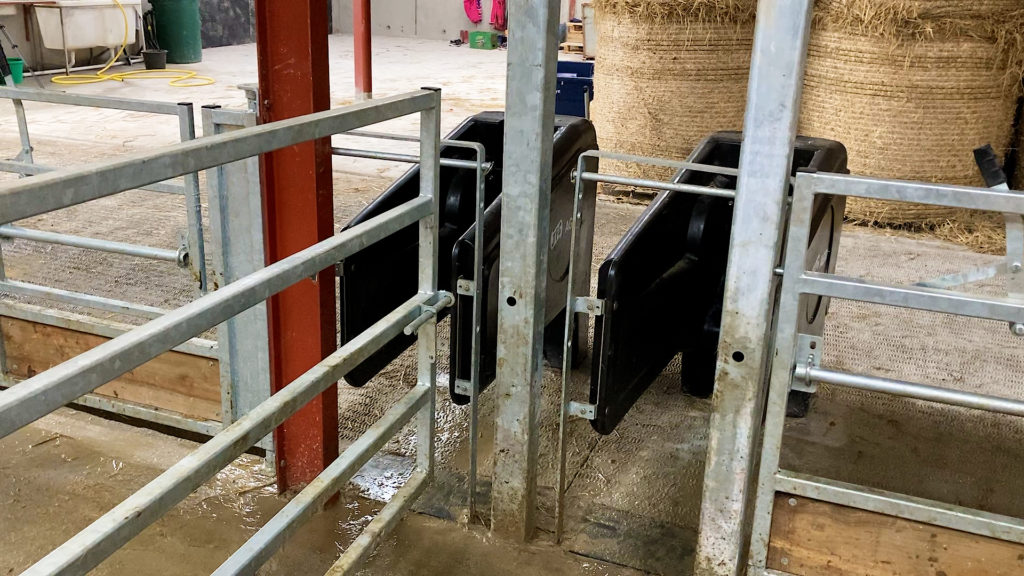 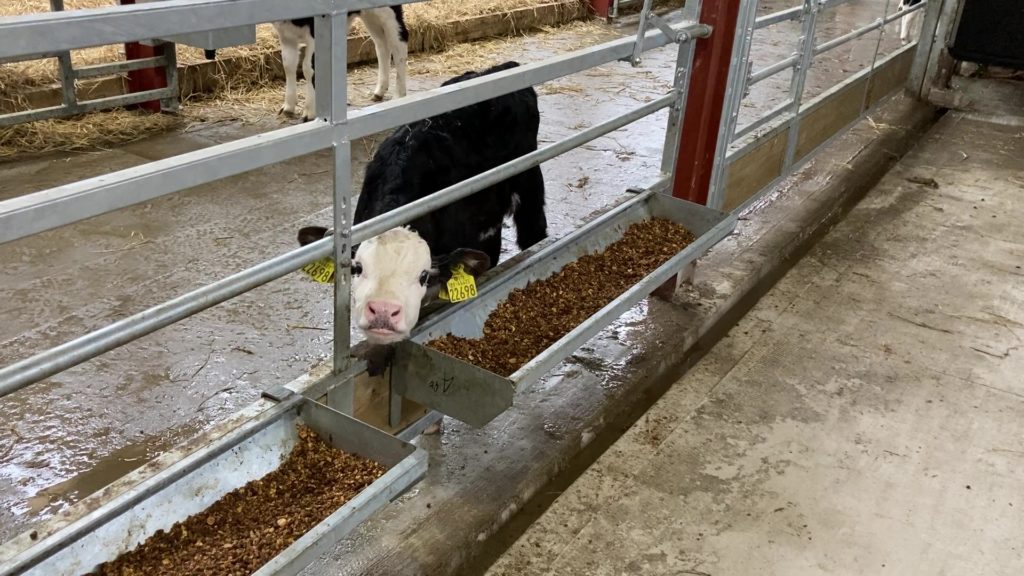 ‘Glad I went ahead and built it’

Pierce said that he built the new calf house as big as it is in case that policy changes in the future, which would mean that dairy farmers would have to keep calves on-farm longer than they have to at present.

He added: “When I was thinking about building it, I was thinking that there could come a time when we [dairy farmers] will have to keep calves longer on the farm than we have to now.

So, that’s why we built it as big as we did. If we have to keep calves longer in the future, they’re going to need more space so that what’s the other side of the shed will be for [older calves]. 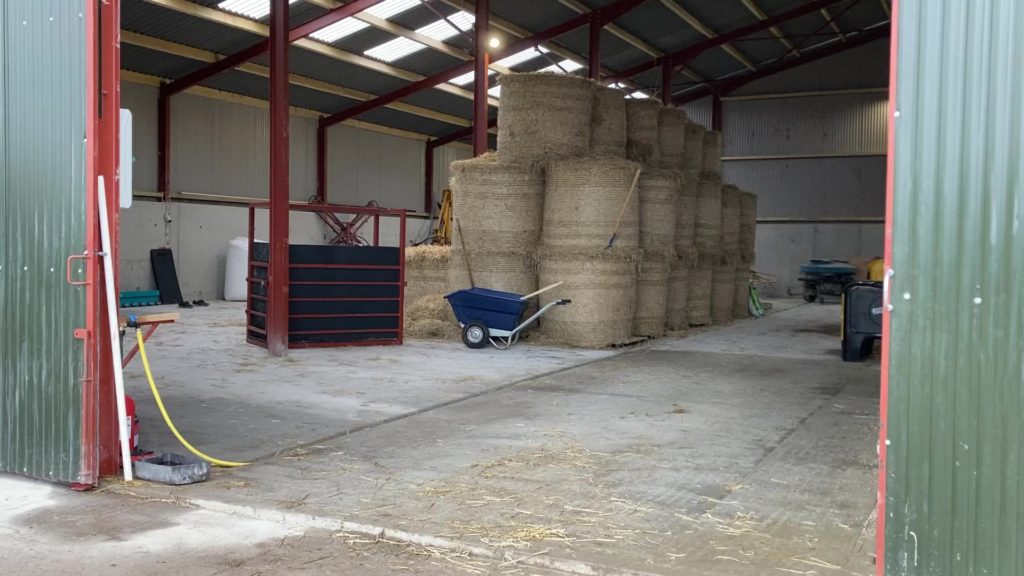 “However, in saying that, we plan to fit out two more pens on that side of the shed for next year to train calves in drinking.

“Overall, I’m very happy I went ahead and bit the bullet and built it. It turned out very well and is a massive improvement on what we had before.” 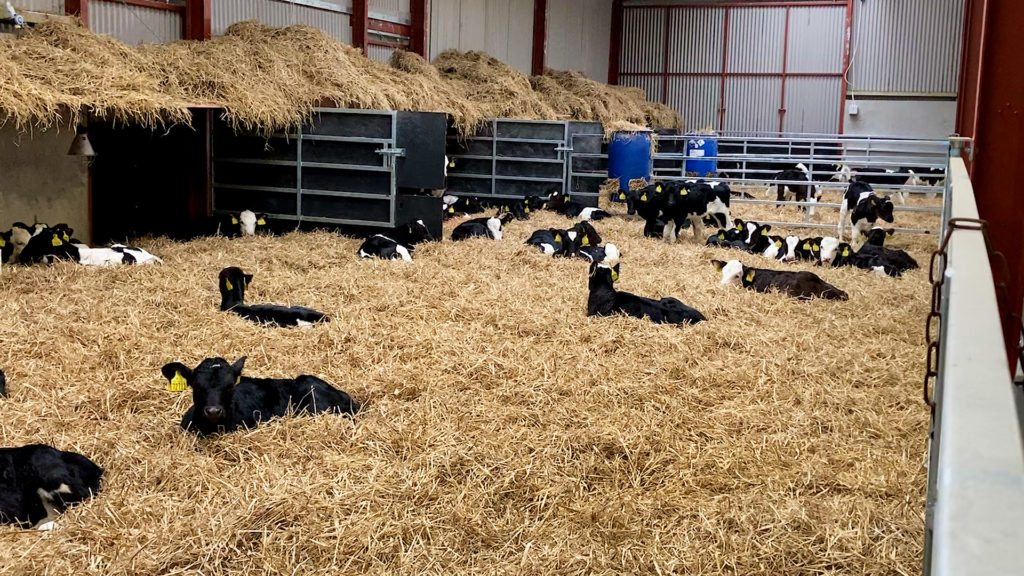 ‘No dogs allowed’ campaign calls for action on livestock attacks

Hogget trade ‘tough’ at the start of the week at marts