Some 400 piglets and 32 sows have been killed in a fire on a Co. Tyrone farm, according to the Northern Ireland Fire and Rescue Service (NIFRS).

The NIFRS said that they received a call about the fire at around 5.40am this morning (Thursday August 13).

Some 35 firefighters and six fire brigades attended the scene and Max Joyce, Group Commander, speaking to UTV said that the cause of the fire is yet to be established.

“When we arrived there were two outbuildings containing pigs well alight, so we immediately started to get fire fighting.

“Two of those buildings were lost and what we were able to do is save five other buildings.

“Unfortunately we estimate that 32 sows have been killed along with 400 piglets,” he said.

Joyce said that firefighters are still at the scene as the incident is ongoing, but that they are beginning to scale down now.

Firefighters remain at the scene of a fire at a shed at Melmont Road, Strabane. A number of livestock have perished. 2 appliances remain.

The North’s fire service tweeted this morning (Thursday) that firefighters remain at the scene at a shed at Melmont Road, Strabane.

“A number of livestock have perished. Two appliances remain,” the NIFRS said. 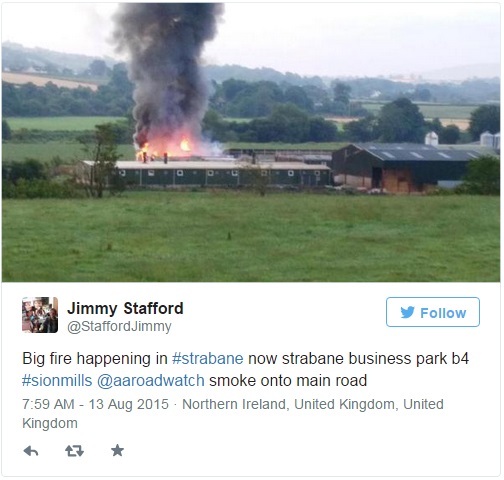 Jimmy Stafford, a DJ at Highland Radio, was driving to Dublin at 6am this morning (Thursday) when he took a photo of the blaze.