Organic farming made up just 1.6% of the available agricultural land in Ireland in 2015, the second lowest in Europe, the latest Eurostat figures show.

This represents just 73,000ha being used for organic farming in Ireland. Only Malta designated less land than Ireland, with a percentage of just 0.3% which equates to 30ha.

It should be noted that the importance of the organic sector is generally lower in regions with plains where more intensive production systems prevail, according to Eurostat.

Organic farming combines the best environmental practices, a high level of biodiversity, the preservation of natural resources and high production standards based on natural substances and processes.

Organic farming made up 6.2% of the European Union’s total Utilised Agricultural Area (UAA) last year, with there being more than 11m hectares of certified area or area under conversion in 2015. 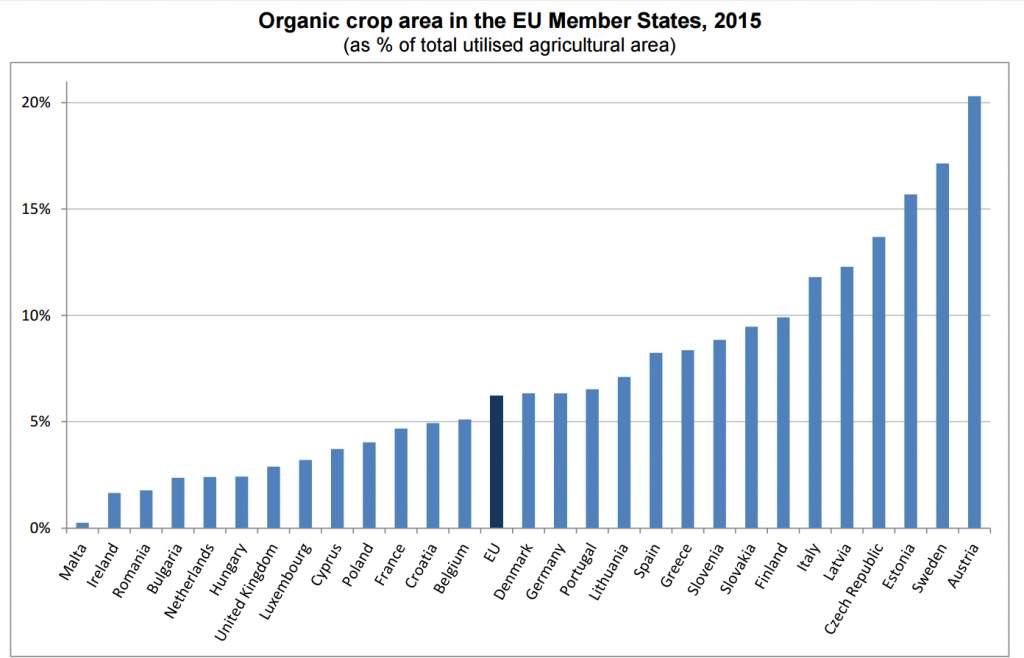 Since 2010, the area devoted to organic farming has grown by almost 2m hectares.

In Ireland in 2015, the amount of land used for organic farming had increased by 53% compared to 2010 figures.

However, the UK recorded a decrease of 29% in the same period, while countries such as Bulgaria and Croatia have shown close to a fourfold increase in the amount of land designated to organic farming.

Similarly, there was a 23.5% increase in the number of registered organic producers since 2010, with approximately 271,500 organic agricultural producers registered in the EU last year.

These figures represented an increase of 5.4% in the number of organic producers compared with 2014, Eurostat figures show.

Meanwhile, Spain, Italy, France and Germany registered the largest organic areas as well as the largest numbers of organic producers in 2015, the figures show.

These four countries accounted for over half of both the total EU organic crop area and organic producers in the EU in 2015.

The EU Member States where organic production proved the most popular included Austria and Sweden, both of which had nearly 20% of available land (over 500,000ha) involved in organic farming, figures show.

10 steps to make before switching to organic beef production