The role that trace elements play in the fertility and thrive of both dairy and beef cattle is well established.

Trace elements such as copper, selenium, cobalt and iodine are vital for fertility, and where a deficiency has been diagnosed, it is important to address it via a proven method of supplementation.

The relevant trace elements should be supplied to the animal at required levels and at consistent rates, particularly during key periods during the production cycle.

However, it is not just the trace elements themselves which are critical, but also the manner in which they are supplied. We need to ensure that all animals receive an amount of trace elements which is compatible with their daily requirements.

Too much of a trace element can prove toxic; too little and the deficiency will not be addressed. Many convenient free-access delivery methods such as licks and blocks have disadvantages, as intake levels cannot be measured.

In fact, studies have shown that intakes between animals are extremely variable, with some animals consuming nothing and others consuming excessive quantities due to palatability differences.¹

Oral drenches are often seen as a cheap and convenient option, but with the body unable to store trace elements such as cobalt and iodine, they are not appropriate solutions for ongoing deficiencies.

One such method is the Bimeda Cosecure Cattle Bolus, which is the only multiple trace element bolus available in Ireland that is a registered medicine (category LM). Cosecure Cattle supplies ionic copper, ionic cobalt and selenium at a controlled and constant rate, for up to six months. 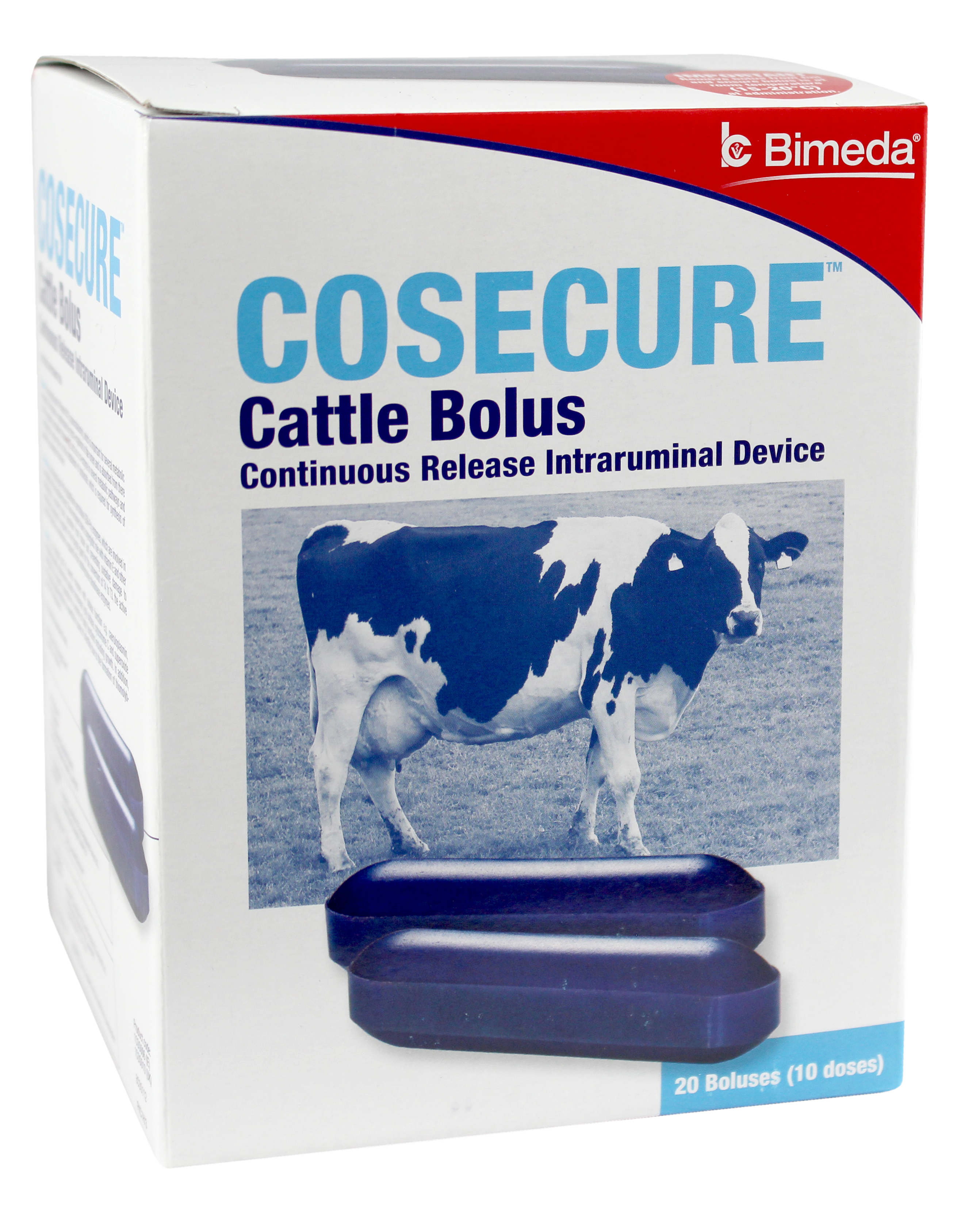 Cosecure Cattle is also the only medicinal multiple trace element bolus in Ireland or the UK, which has demonstrated increased reproduction outcomes in an independent trial.²

The research involved the dairy herd at the University of Leeds and the cattle in the trial had all previously suffered from low conception rates and anoestrus. Some had shown visible signs associated with copper deficiency and thiomolybdate toxicity, such as ‘spectacles eyes’ and poor coat colour.

Cattle to which Cosecure Cattle Boluses were administered benefitted from increased fertility compared to the control group, and, specifically:

As all farmers know, these results are great news for profitability.

Research³ has also shown that there is a cost saving for each day a cow is put in calf earlier, so it is important to find proven methods of trace element supplementation, to address any known deficiencies which may be contributing to impaired fertility.

In Ireland, many cattle also suffer from iodine deficiency and farmers will be pleased to learn that Bimeda also offers an iodine-containing bolus called CoseIcure. 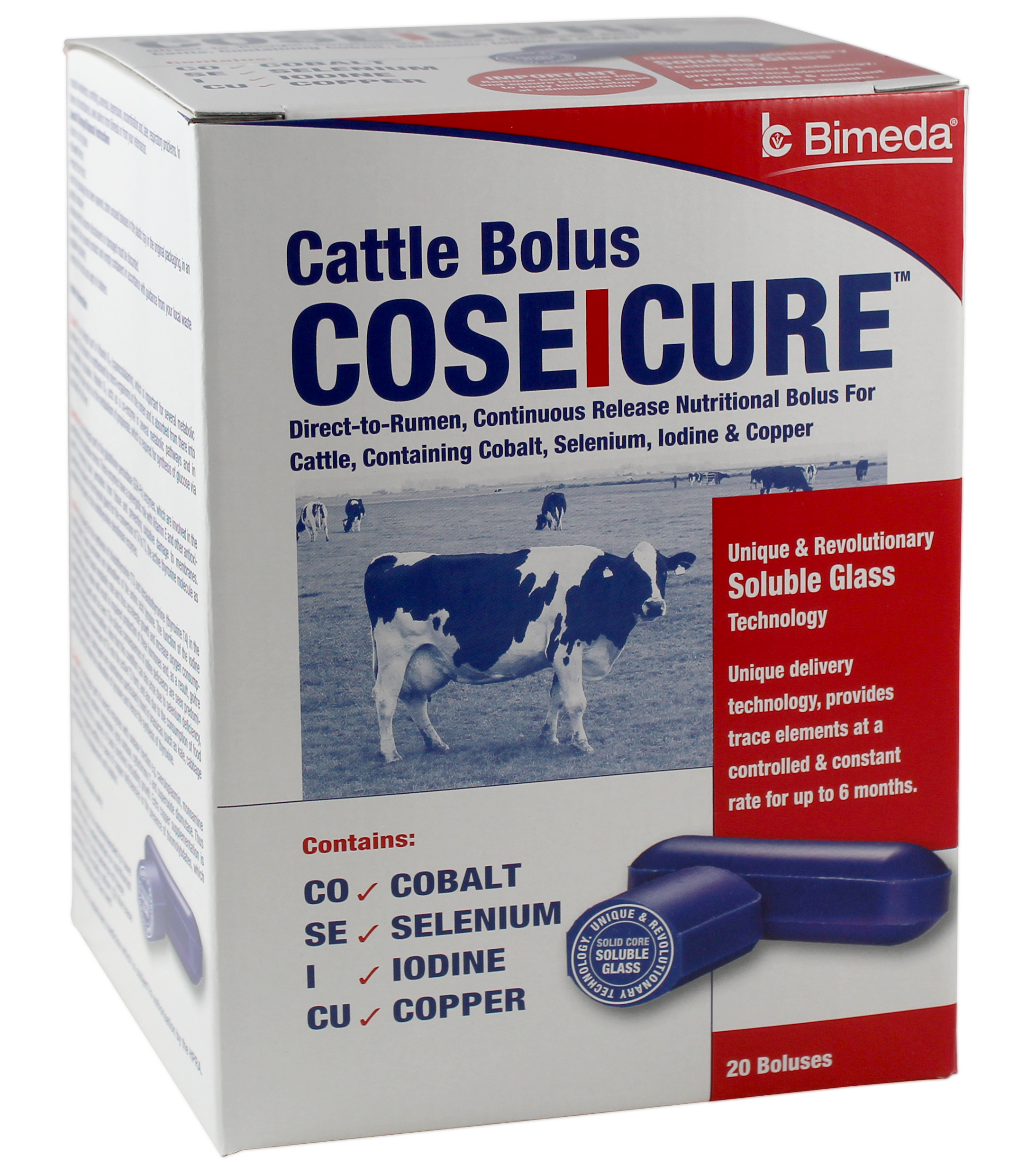 Like its sister product Cosecure, CoseIcure lasts for up to six months and delivers ionic copper, ionic cobalt and selenium, as well as iodine.

The role of molybdenum and sulphur

High levels of ingested molybdenum and sulphur are an additional issue which is common on Irish farms. These elements can combine in the rumen to form a compound called thiomolybdate.

Thiomolybdate can bind with the copper co-dependent enzymes in the bloodstream, which play a role in fertility, and render them inactive. This phenomenon is known as thiomolybdate toxicity (TMT).

The Cosecure and CoseIcure boluses contain a unique form of copper known as ionic copper, which is known to be highly effective at combating the negative impacts of molybdenum and thiomolybdate, and preventing TMT from occurring.

The ionic copper in the Cosecure and CoseIcure boluses is available at the same pH as the rumen.

Here it binds with thiomolybdate and prevents it from moving into the bloodstream and causing TMT. This means the CoseIcure and Cosecure boluses are a popular choice on high-molybdenum farms, following on from appropriate diagnostics.

The role of soluble glass

The Cosecure and CoseIcure boluses also have a unique delivery system, being made of a unique soluble glass which dissolves at a controlled and constant rate.

This means that the boluses deliver consistent rates of trace elements each day, at levels which are consistent with the daily requirements of the animal. This is an important feature of the boluses, as peaks and troughs in trace elements can adversely affect fertility. 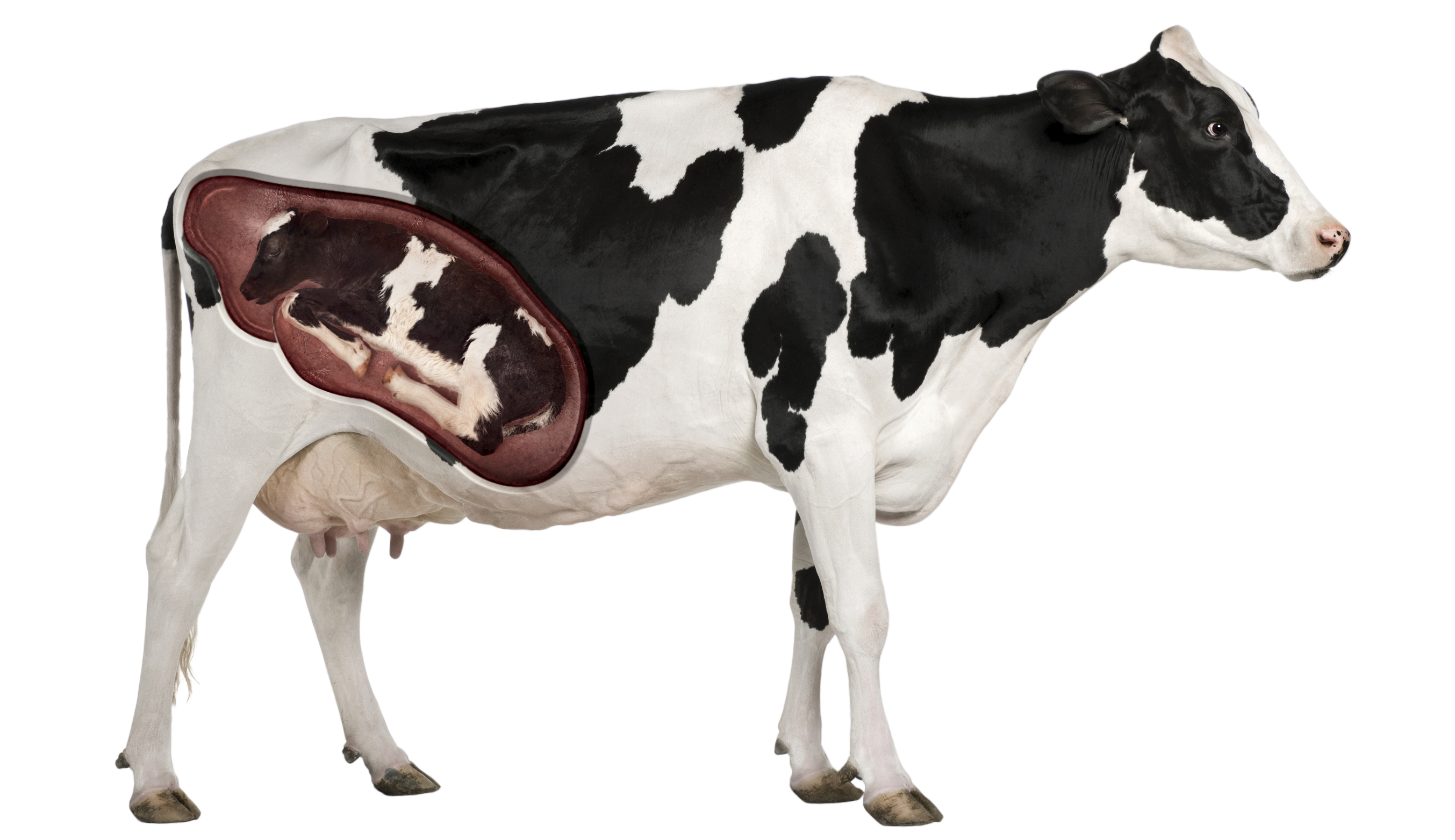 It’s important to note that trace elements in any form should only ever be given on the basis of a diagnosed deficiency and on the recommendation of a veterinarian, nutritionist or animal health advisor.

If your cattle are known to be deficient in copper, cobalt, selenium or iodine, or are known to ingest high levels of molybdenum or sulphur, speak to your veterinarian or animal health advisor about the role that Cosecure or CoseIcure could play in addressing these issues.