Why this Co. Waterford farmer transitioned from dairy to beef – and ‘couldn’t be happier’ 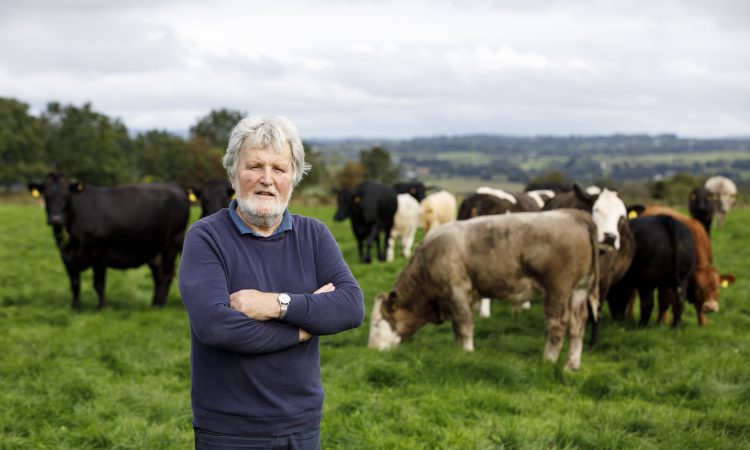 John Power farms an award-winning herd of 200 suckler cows with his wife Catherine and son Alan in Clonea, near Kilmacthomas, Co. Waterford.

Formerly a dairy farm, John sold his milk quota in 2008 and focused on the sucklers. He is absolute on the benefits this change made to the Power family life.

“You need a certain personality type for dairying, and I couldn’t be happier farming than with the suckler system we run now. To be honest, if milk was at €2/L I wouldn’t go back to it – I spent 30 years of my life milking and I don’t miss it one bit,” John said.

All cattle are finished to beef on this picturesque farm situated in the rolling hills below the Comeragh mountains. Heifers are finished at 22 months out of the shed in January and February. Out of the normal crop of 100 bulls, 80 are finished under-16 months while the remaining 20 bulls are killed at 22 months.

John has a simple, yet well thought-out housing plan for the 200-strong cow herd. 120 cows are on cubicles while the remaining 80 are housed on rubber slats. These are mainly the SR EASYFIX mats, some of which are down 15 years and as good as the day they went in.

“The cows have great comfort on the EASYFIX slat mats. They’re never afraid of a slip or a fall and content to lie out for as long as they would in the field.”

The Powers run an all spring-calving herd, calving in 10 weeks from February 1. “I try to calve as close to grass as possible,” said John.

“Some years we have had cows and calves out in February, but I find one or two wet nights at that time of year can really set-back the young calves, so we keep it to early March now.”

Disease prevention and keeping cattle comfortable and content are key aims on the Power farm.

We try to be proactive and prevent disease rather than treat it. I’m very conscious of the growing issue of antibiotic resistance and we minimise the use of antibiotics on the farm for this reason.

All Power’s cows are vaccinated two weeks prior to calving, to prevent scour in the calves. Calves all get an RSV P13 and an IBR intranasal vaccine at dehorning.

Speaking about the vaccination routine, John explains how they had a bad spring 10 years ago and they sat down with their vet to plan for a healthier calving period.

“We don’t know ourselves,” said John. “It really changed our lives. I mean, I bought a crate of electrolyte last spring to have for sick calves – sure I never opened it.”

Hygiene and excellent husbandry are the other two legs of the health management stool here. Calving pens are cleaned out and steam-washed every two to three days at the peak of calving.

The other key measure taken by John is that the second hundred cows to calve are run as a separate herd. They are moved to an out-farm before they go back to slats or onto grass. In this way, older and younger calves never mix and it helps to keep a lid on disease.

“We have a simple breeding plan,” explained John. “We go for the black Limousin off the British Friesian type cow. There are a few Simmental crosses too – some of them are great cows.”

Buying heifers from a small number of repeat supplier farmers helps to maintain consistency in the herd and minimise any risk of bringing in disease.

“We originally had issues finding the right strain of Charolais to run as stock bulls, but over time we found the ideal bull was more blocky, rather than big and muscular,” John said.

“This gives us a good, growthy bull calf that will gain weight and fat cover under-16 months.”

Current stock bulls comprise two CF52s, a Major, two Vera Cruz and a Gin & Tonic bull. An easy-calving Limousin bull is run with the heifers after six weeks of AI to mop up any repeats.

Bulls are finished on ad-lib meal over the last 100 days. They are fed a total mix ration (TMR) with silage, straw and a high-maize meal to get the fat cover on them.

“We used to house the fattening bulls on straw, but they are now on the EASYFIX SDR slat rubber. It really is a super slat mat.

“They don’t jump and mess as much as on the SR mats with the extra grip, so we get no injuries and the bulls stay as clean as they would be on straw.

“The curved profile of the rubber means that dung rolls off them nearly by itself. I couldn’t be happier with these slat mats and they made a massive saving for us on the straw bill alone.”

The Power farm is the Flagship European Sustainability farm for McDonalds and Dawn Meats’ programme.

John’s wife Catherine is a retired school principal, while his son Alan, who studied Agricultural Science at Waterford Institute of Technology (WIT), recently returned to work the farm with his parents.

His daughter Claire, who manages social media for WLR radio in Waterford, helps out when at home too – “when she’s not on an airplane somewhere”, joked John.

Sean Roche has also worked with John on the farm since the 1980s.

“I suppose, the key to success here is that we keep things simple and the cattle are treated as good as ourselves,” said John. “If the stock are content and happy they will always perform for you.”