Why it pays to spray dock-infested silage swards 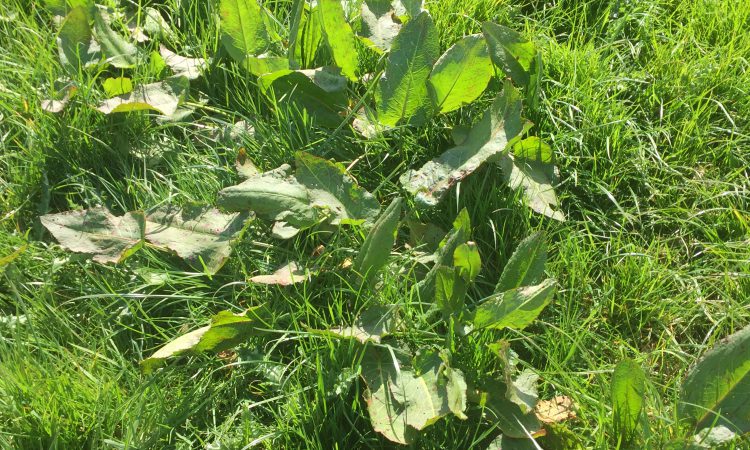 When it comes to your choice of herbicide, DoxstarPro is a highly effective product for controlling docks.

A translocated herbicide, DoxstarPro, contains two powerful chemicals, triclopyr and fluroxypyr, ensuring the most effective kill of the dock root system. Unlike dicamba-based products, it has the advantage of not affecting grass growth.

Chris Maughan – technical manager with Whelehan Crop Protection, the company that distributes DoxstarPro on the Irish market – stressed that timing of the spray is key to achieving best results.

“The ideal time to spray silage swards is two to four weeks after nitrogen is applied, when docks are at the perfect stage for an effective kill.

“The docks should then be actively growing and 15-25cm high or wide.

“It is vital to have an interval of at least three weeks between applying DoxstarPro and cutting the silage. This ensures that the chemicals get fully translocated down to the dock root system, a vital factor in achieving long-term control,” said Chris.

Some dock-infested silage crops due to be harvested over the next three weeks are now past the ideal stage for spraying. So, what should farmers in this situation do?

“My advice is to harvest the crop and take the hit on yield and quality. Following two to three weeks regrowth, spray with DoxstarPro when the docks should be at the perfect stage for an effective kill,” states Chris.

Docks have a huge impact on silage yield. Even a moderate infestation will cut silage dry matter yield by at least a tonne/acre and severe infestations can cut yields by up to half.

Docks can also have a negative impact on silage fermentation. In baled silage, the dock stems can puncture the film, resulting in substantial wastage.

There is a noticeable increase this year in the level of chickweed in silage and grazing pastures. This appears to be due to very tight grazing during last summer’s drought, which resulted in a lot of chickweed seeds being disturbed.

These seeds germinated during the autumn and the chickweed continued to grow during the mild winter and spring. Severe infestations can effectively smother the grass, resulting in a massive drop in output and impairment of silage quality.

DoxstarPro is highly effective on chickweed. It is also powerful on dandelions, which also appear to have increased this year.

Where chickweed is the dominant weed in a silage sward and where weeds such as docks also exist, PastorTrio, another translocated herbicide, is the perfect solution.

It contains the powerful active ingredient florasulam and the two tried and tested ingredients fluroxypyr and clopyralid, ensuring a very wide spectrum of weed control.

In addition to chickweed, docks and dandelions, PastorTrio is highly effective on a wide range of other weeds, including thistles, daisies and plantain.

Envy, the recently launched herbicide, is another effective option. Containing the two active ingredients fluroxypyr and florasulam, it is powerful on the same range of weeds as PastorTrio, with the exception of thistles.

As with DoxstarPro, both PastorTrio and Envy should be applied as a pre-harvest application when weeds are actively growing.

In addition, there should be an interval of at least three weeks between application and silage cutting in order for the chemicals to be fully translocated to the root system of the weeds.

There is evidence that mouse-eared chickweed is a significant problem in new swards that were sown last autumn. It is spread primarily by seeds, which can remain viable in the soil for years. Therefore, if not controlled early, it can rapidly take over the sward.

“Mouse eared chickweed differs from common chickweed as it contains many tiny little hairs on the leaves. These hairs can prevent the tiny spray droplets reaching the plant leaf cuticle. This makes choice of herbicide critical,” said Chris.

He said Envy and PastorTrio, which contain both fluroxypyr and florasulam, are particularly effective on mouse-eared chickweed, compared to products that contain fluroxypyr only.

If docks are the dominant weed in a silage sward, use DoxstarPro. It is also highly effective on chickweed and dandelions.

If weeds such as chickweed are the dominant problem, use PastorTrio. It also controls docks, dandelions, daisies, thistles and plantain.

Envy is powerful on the same range of weeds as PastorTrio, except thistles.

Both PastorTrio and Envy are effective on mouse-eared chickweed, a particular problem in new swards that were sown last autumn.