Why are UK farmers getting better returns on beef?

The UK’s “adherent domestic demand” for British beef is the chief reason why UK factories can return stronger prices to farmers, the director of Meat Industry Ireland (MII) has explained.

“We are an export nation. 90% of the beef we are producing is exported and we are being compared on many occasions to the UK – which has a rather level price performance throughout the year.

[In the UK] the level of variation in price is not as great as is seen in Ireland because they have a strong domestic demand – that is an adherent demand.

“For 52 weeks of the year [there is a] requirement for British beef and retailers ensure that they have that product there. That gives a more level performance on price throughout the year,” Healy stated.

By contrast, Healy pointed out that because Ireland is “so export dependent”, this results in greater price challenges.

“You are going into other markets so you are the next in line to the imported product. You are depending on the surplus or deficit that exists in the various markets we service throughout the year and that gives some volatility.

“Equally we are, while not as excessively in the past, but we have a very seasonal slaughtering. We are seeing moves in the volumes of animals that are coming out at particular times of the year that puts pressure on the system as well,” stated the MII chief.

‘Incomes on the floor’

The comments follow repeated demands for factories to “immediately increase” beef prices in a big to restore some confidence in the struggling sector.

Earlier this week, Joe Healy the president of the Irish Farmers’ Association (IFA) said beef farmers have been “short-changed” on the price this autumn, calling on factories to move up to at least 400c/kg.

Having come through a “horrendous” year, Healy pointed out that incomes on the floor.

There is rising anger among farmers with the way the factories cut beef prices this autumn and continued to hold prices down at loss-making levels, despite strong returns from our main export market in the UK.

The IFA leader said with the increased demand for the Christmas trade and the strength of the UK market, factories can pay more.

“Cattle prices in our main export market in the UK were at 373p/kg for R3 grade steers, which is the equivalent of 442c/kg.

“The price gap between Irish and UK prices has now widened to €200/hd, which shows that the factories are not returning a fair market price to farmers and could pay a lot more. 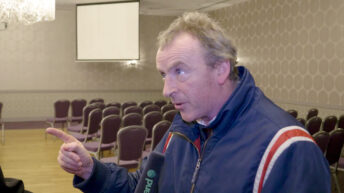