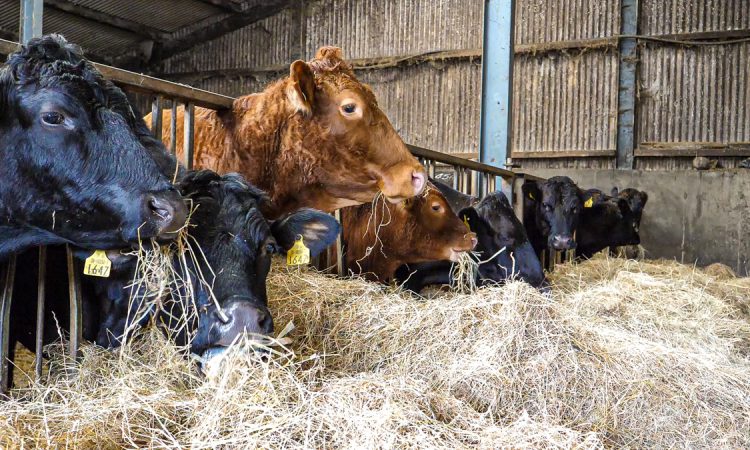 Studies have estimated that a case of respiratory disease costs, on average, €93¹ per affected calf when considering the direct costs such as treatment and labour.

The effect on growth rates can be an even larger (and often hidden) cost – even a moderate case of pneumonia can reduce daily liveweight gain (DLWG) by up to 72g/day – equivalent to a 22kg loss over a 10-month period.

The effect on DLWG in severe cases has been shown to be even higher with affected cattle showing a reduction of 202g/day (61kg over a 10-month period)².

During periods of stress such as weaning, grouping and housing, animals’ requirements for trace minerals increase.

Stress often results in animals’ dry matter intakes (DMI) reducing which means that whilst demand for trace minerals has increased, intakes have actually decreased, and it is not uncommon to see weanlings, in particular, fall into poor trace mineral status during this period.

Many animals will also be vaccinated at the same time as weaning and housing. Vaccination increases the demand for systemic trace minerals as they are required for the body to effectively respond to a vaccine and create antibodies which will then provide protection against specific diseases. Selenium (Se), copper (Cu) and zinc (Zn) in particular are vital for vaccine response3, 4, 5.

When a group of cattle are vaccinated, the response to that vaccine by the individuals within the group will vary (Figure 1). Factors such as nutrition, stress, vitamin and mineral status, and the general health of the animal being vaccinated, will affect how the immune system responds to the vaccine.

Therefore, stressors such as weaning, transport and even vaccinations themselves can exacerbate trace mineral imbalances which could lead to reduced response to vaccines⁶.

Conversely, cattle who received injectable trace minerals (ITM) at the time of vaccination (blue bars) had higher levels of circulating copper when tested at 14 days, suggesting that ITM supplementation can help mitigate the loss associated with vaccination.

Trace minerals such as Zn, manganese (Mn), Cu and Se are essential for optimal immune function, maintaining health and growth in cattle. They are particularly important in stressed cattle or at the critical phases in the production cycle, such as pre-calving, pre-breeding, weaning and vaccination.

It is worth emphasising that trace minerals have poor intestinal absorption regardless of the source7. This poor oral absorption is further reduced by antagonists such as sulphur (S), molybdenum (Mo), calcium (Ca) and iron (Fe) or binding to undigested feed particles⁸.

Daily oral intake of trace minerals are essential to meet maintenance requirements in cattle, but at high demand periods like pre-calving, pre-breeding, weaning or vaccination intake can fall in response to stress. Consequently, clinical or sub-clinical deficiency can develop.

Studies from leading universities have demonstrated the beneficial effects of strategic injectable supplementation. In particular by enhancing the immune responses to vaccination9, 10, 11.

In a 2016 study, the effects of ITM supplementation on response to vaccination was measured. Cattle that received ITM at the time of vaccination had higher antibody levels 28 days later than unsupplemented cattle that had been vaccinated at the same time¹².

Figure 3 shows the results of another study that compared the response to vaccination of two groups of cattle. Both groups were vaccinated; one group received an ITM supplement at the time of vaccination whilst the other group did not.

Blood samples collected from both groups showed that on day 14 a greater proportion of the supplemented group were seropositive for BVD type 1 than in the unsupplemented group¹⁰, suggesting that their immune response to the vaccine was faster.

In a 2012 study, the effects of ITM supplementation with concurrent vaccination were measured. Compared to controls, animals treated with an ITM supplement at the time of vaccination had significantly greater neutralising antibody titres against IBR on days 14, 30 and 60 post vaccination⁹ (Figure 4).

Strategic ITM supplementation bypasses the harsh rumen environment, rapidly raising circulating mineral levels in cattle within eight to 10 hours, and after 24 hours the trace mineral concentrations in the storage organs like the liver are at raised concentration13.

Vaccination is a powerful tool to prevent infections; ask your vet how an injectable trace mineral supplement could help to enhance vaccine response and therefore immunity in your herd.