What did farmers say about the first IFA presidential debate? 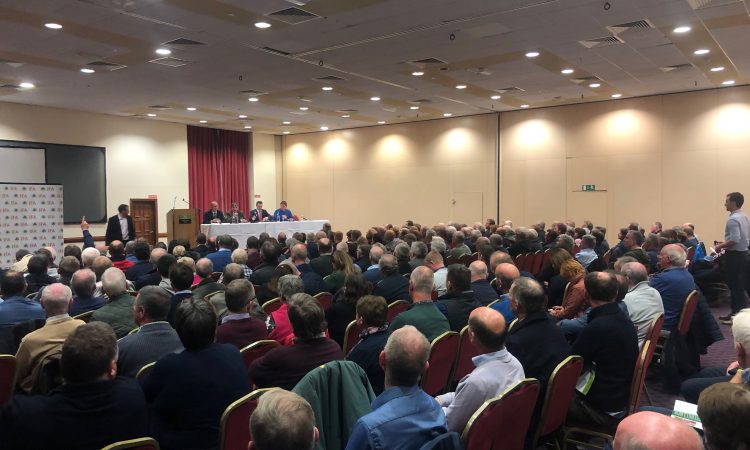 At last night’s Irish Farmers’ Association’s (IFA’s) presidential debate, farmers on the floor had a mixed reaction on the candidates’ performances in the first of 17 of these debates which will take place nationwide over the next month.

After the event, AgriLand caught up with a few of the grassroots IFA members to see what they thought of the meeting.

From Mallow, Co. Cork, Tom Sherman is a pig and beef farmer. He said: “It was the worst debate I was ever at. 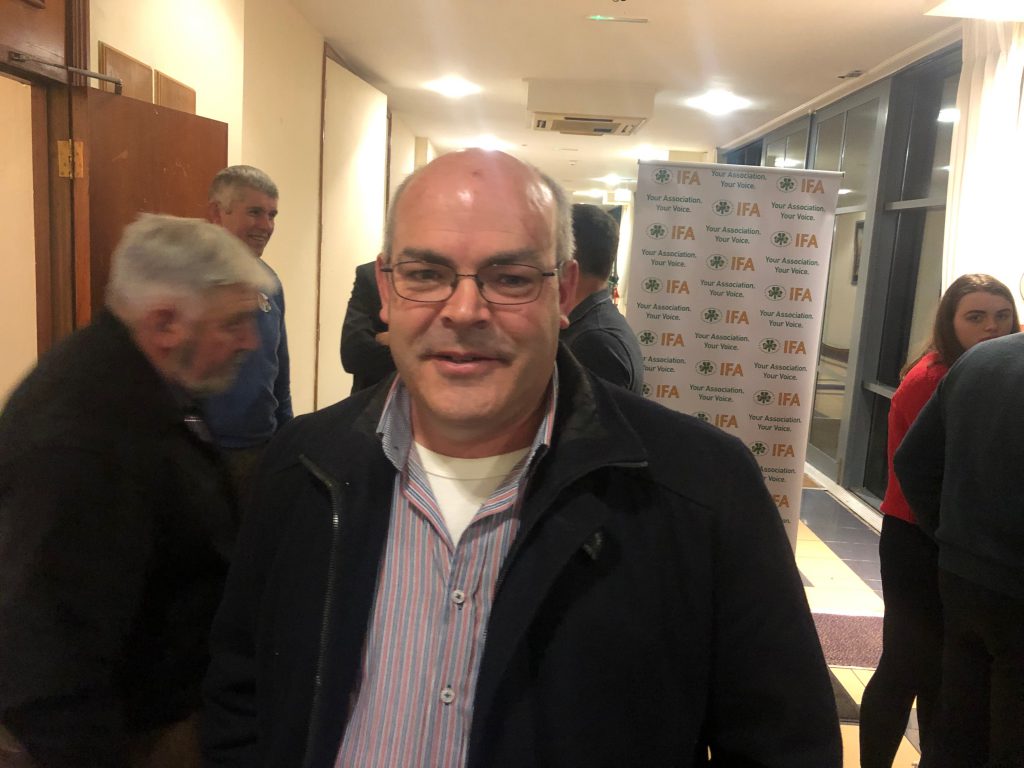 “I thought the debate was flat, but thought Cullinan’s idea of putting the chairpersons of the commodities onto the board of IFA was a very good idea to get the people representing the producers on the ground up onto the board to get the message directly into the board.

I think the livestock board in its present format is not working.

Continuing, he outlined: “The Beef Plan Movement and all that needs to be discussed as well. It was the elephant in the room tonight and I thought it would stamp on someone.”

A mixed farmer from just outside Limerick, Ray Ryan explained he milks cows, fattens cattle, keeps a flock of sheep and also has forestry.

He noted the event in Limerick was “a good debate” and said the candidates “all had good points”. 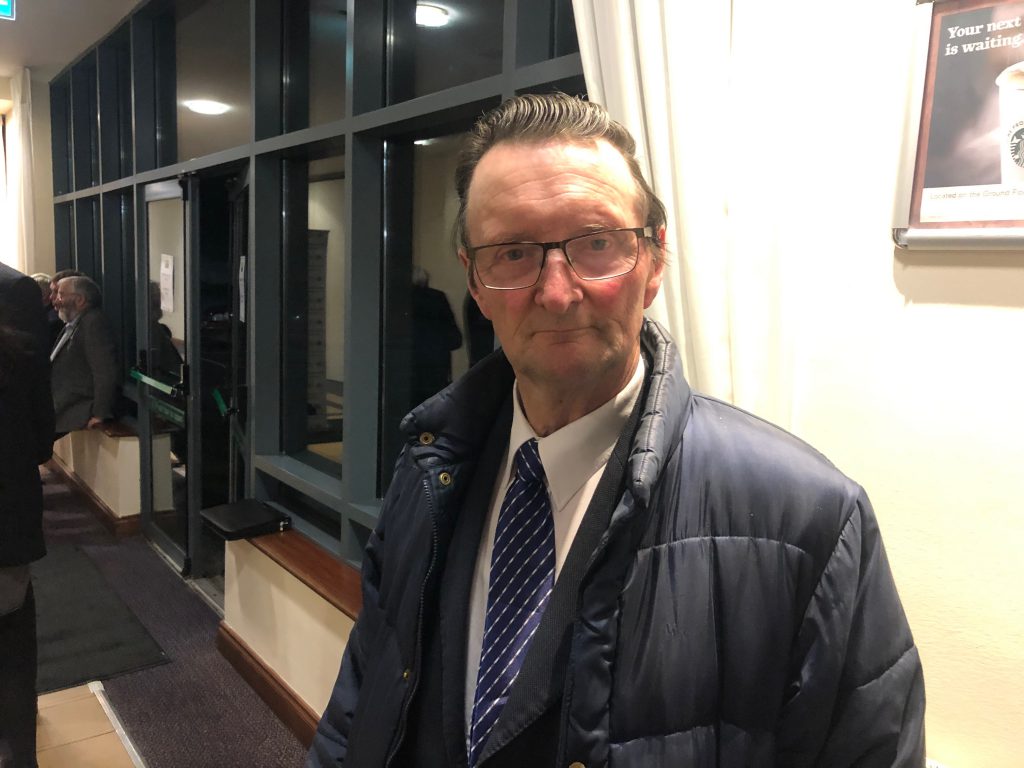 He believes the main issue affecting farmers currently is cattle prices and said “cattle are leaving no profit whatsoever and the suckler cow is a lot of the worry”.

From the Parteen IFA branch in Co. Clare, Tom Lane is running a suckler/beef enterprise.

Commenting on the IFA presidential debate, he said: “There’s a bit of restructuring to be done in the IFA to make it financially viable and keep the show on the road.” 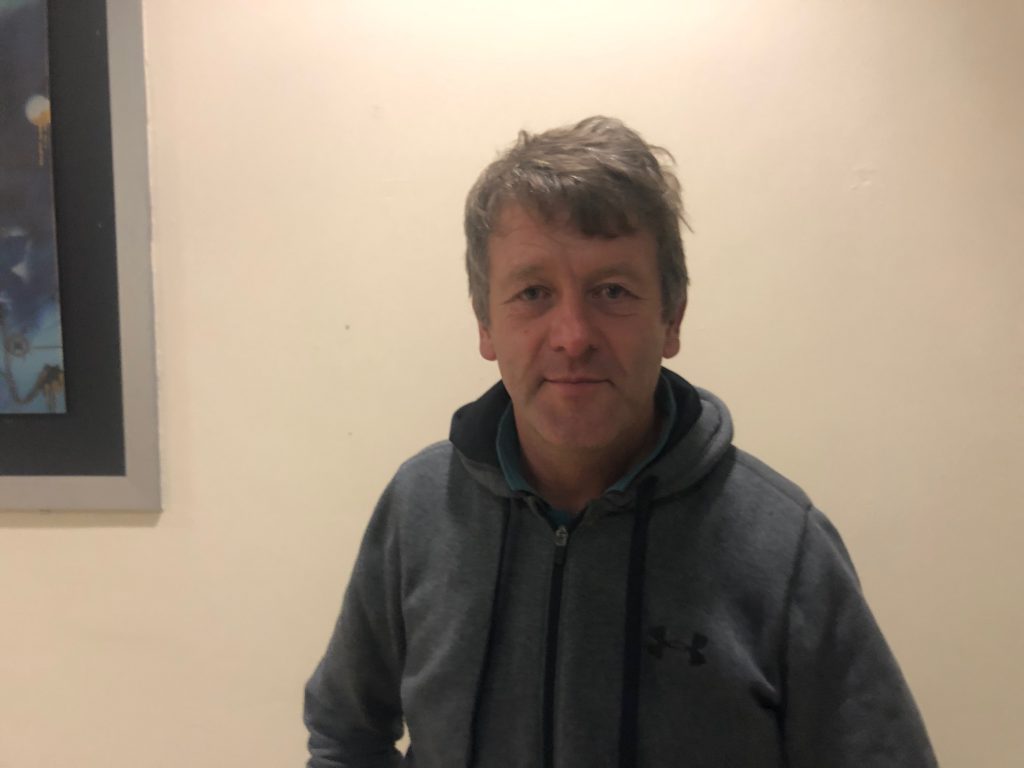 Continuing, Lane added that he hoped the candidates would have outlined: “What was IFA doing when everybody else was protesting?” He said: “The IFA should have stepped up a little bit sooner and done a little bit more.

I’d say the three candidates for president were all neck and neck tonight. They have it all to fight for in the next few weeks.

Commenting on other issues affecting farmers, Lane said: “Unfortunately, CAP [Common Agricultural Policy] is shrinking for a lot of people and farmers are being squeezed by convergence, that’s one thing that will have to be reversed.” 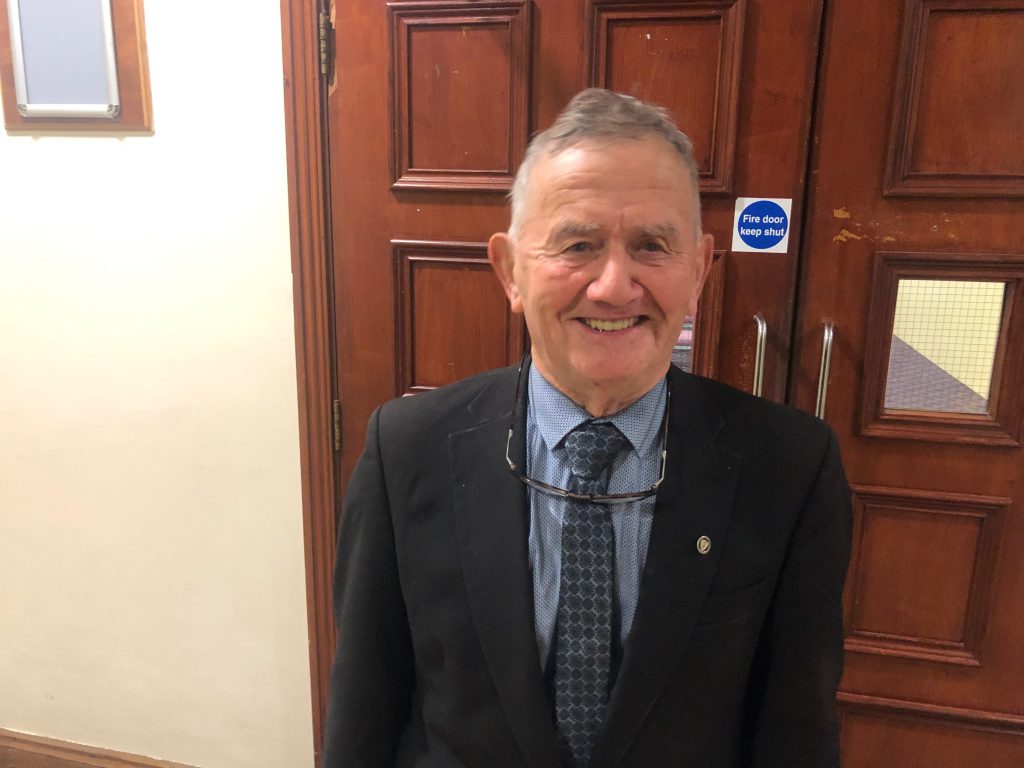 He outlined that he is a former national chair of IFA’s rural development committee and said: “It’s great that in difficult times, we have three people – with ability – who are prepared to put their name forward and lead the association.”

He said he is a supporter of Tim Cullinan but added he also thought the other two candidates were very good also.

A suckler farmer from Co. Limerick, Dennis Duggan said that difficulty with prices is the main issue affecting farmers currently and added that Brexit and CAP are all still up in the air. 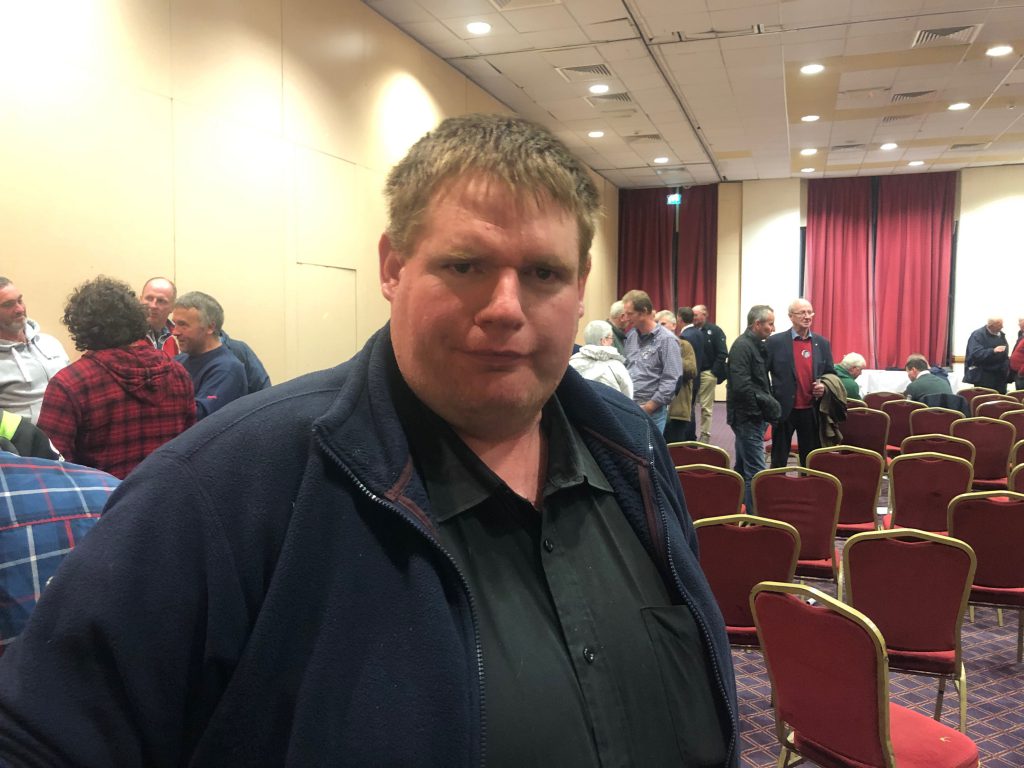 He said: “Angus Woods and the livestock committee is well versed in what’s needed there,” and added: “He has the experience in that line.”

Commenting on the deputy race, he said: “In terms of farming type and land, Thomas Cooney would be similar to what we’re working with. Brian Rushe came across very well and made his points well so I think that race is very open.”

“Listening to the three candidates, it would appear we have two very-much establishment candidates and we have one – what I call – radical that will change it around.” 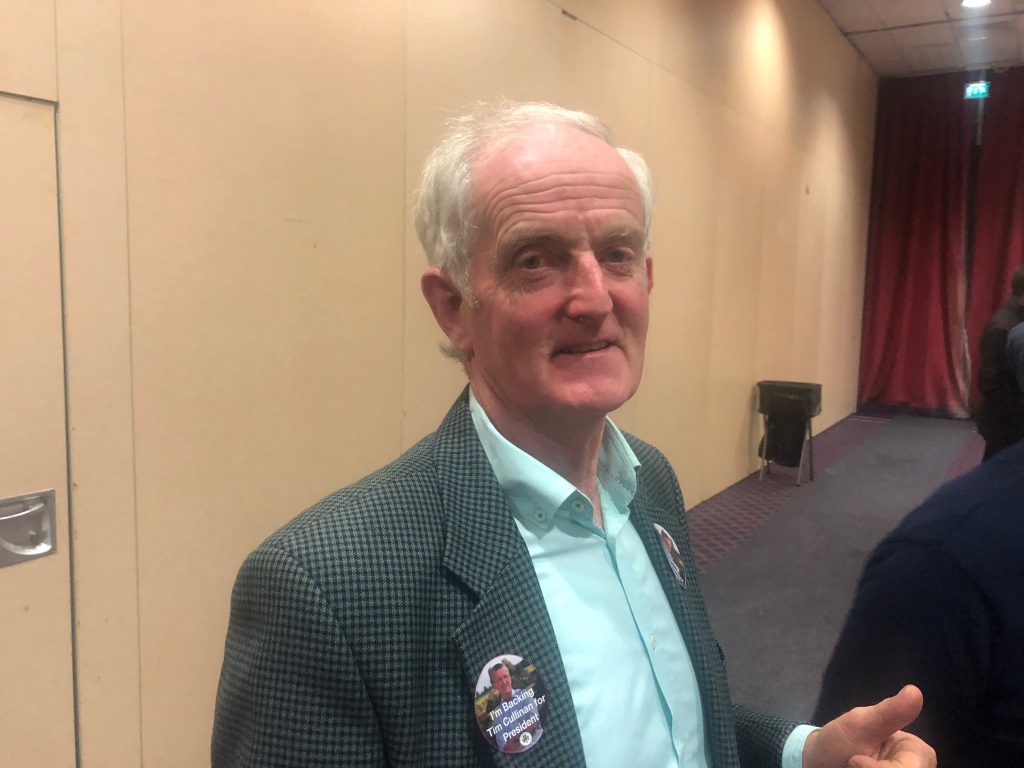 Commenting on issues affecting the sector currently, he said: “It’s the same story the whole time; they’re all the same old issues.

The one thing the candidates didn’t seem to talk about was how we have lost so many members and the main reason for that is the two establishment candidates were asleep at the wheel and nobody wanted to grasp the nettle.

“We either have to be radical or we will get swallowed up by the new splinter organisations,” he said.

Kennedy believes that the IFA “needs a leader with courage and vision that’s prepared to make a decision”.

There’s no point in sitting on the fence and hoping you can hide in the herd.

Commenting on the deputy race, he outlined: “The young fellow was a better speaker but neither of them had a lot to say.”

The event drew to a close at approximately 11:45pm and the candidates will all be attending the Kerry debate in the Rose Hotel, Tralee, tonight, Tuesday, October 22. 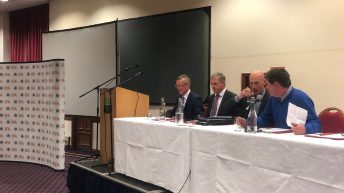