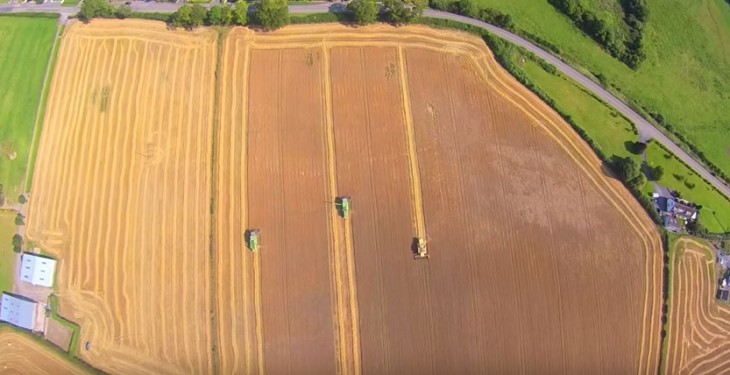 The majority of the harvest is complete across the country and Paul Brennan of Skyfly Photography took to the fields of Carlow to film spring barley being harvested.

The video features brothers Anthony and Peter Brennan and their father Pa, the Brennan’s of Crossneen agri-contractors, as they harvest the last of their spring barley for the 2015 season.

It’s filmed in Crossneen, Co. Carlow in a 12ac field and features two Deutz-Fahrs and a New Holland combine.

The grain is taken by a tractor and trailer before three Welger balers then roll into the field on John Deeres to bale.

Riverdance is the soundtrack to the video and the music was chosen by Anthony Brennan’s daughters Ella and Aine who are into Irish dancing, Paul Brennan said.

Speaking to Agriland earlier this year, he said that machinery working on Irish farmland can be a nice thing to look at from the air.

Brennan has one drone which the camera is detachable from it and says that he is still learning about drones.

Wednesday will also be mainly dry with a mix of cloud and sunshine while Thursday will continue dry in most areas, it said.

The best of any sunshine on Friday will be in the east and with outbreaks of rain developing in the west, Met Eireann said.

The weather at the weekend will be unsettled with showers pressing in on Friday night, it said.