Lely is to host a number of open days on farms this week. One of the key topics up for discussion is the use of robots to milk cows on an outside block or farm.

The first open day will take place on the Walshs’ farm. Brothers Philip and Robert Walsh farm with their parents, Tom and Margaret, in Danesfort, Co. Kilkenny.

The Walsh family come from an existing dairy farm, but only began milking on their outside block with a Lely Astronaut A4 milking robot in March of this year.

Currently, they are milking 70 British Friesian-cross cows. These cows are averaging 26kg of milk/day at 3.3% protein and 4% butterfat. Somatic Cell Count (SCC) is 112,000 cells/ml and the Total Bacteria Count (TBC) is running at 4,000 CFU/ml. 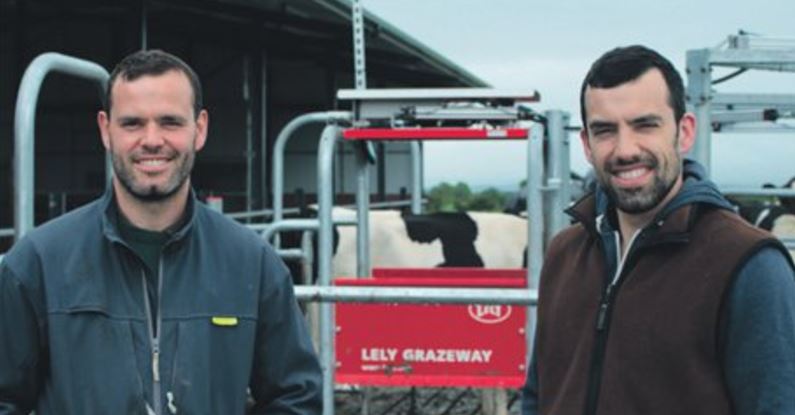 Robert touched on why the family opted to install a Lely robotic milking system.

“Having seen advertisements on milking robots a couple of years ago, I looked into it further for the home farm.

“We were considering expanding the herd at some stage post-quota and after a lot of thought we decided a separate dairy unit on our out-farm with a Lely Astronaut A4 and 70 cows would be most suited.

“In time we may expand further, but at the moment we are interested in how things will go for the remainder of the year,” he said.

Robert and Philip both have off-farm employment and find the flexibility of the Lely Astronaut and grazing system very beneficial to their work schedule.

“We are milking 180 cows on our home farm using our existing milking parlour. In total we are spending about six hours a day between milking and managing the system,” Philip said.

“Whereas on the robot farm, we are spending no more than an hour a day this time of the year.

“Most of the work is done before we head to work in the morning. We find the flexibility of the robot very beneficial, especially when we are busy with work on the home farm.

“Important tasks can be done at different times throughout the day. We can organise the grazing system a particular way over the weekends that it is very quick and easy to move wires if we need to be elsewhere,” he said.

The brothers’ focus is simple – it’s all about grass. At the moment, they claim to be managing the grass better on the robot farm than the home farm.

“We have learned so much about grass that we didn’t know before and, as a result, we have carried that back to our home farm.

“We now pay much more attention to what the cows are grazing before and after parlour milking.

“We had a separate block of ground that we used for young stock, beef and silage. We felt that we could utilise that farm better with dairy cows.

We are growing 1.5 times more grass than we were growing before. We feel that we are utilising the grass much better.

“The flexibility of the ABC grazing system helps when strong grass may need to be baled and taken out,” Philip said.

On the system, Robert said: “We found it very easy to navigate having been shown initially; we understood the basics very soon after start-up.

“As the year goes on different things will need to be done like feed rates, milking access, AI dates, calving dates and scanning dates.

At the moment all of our AI dates and medicine treatments have been put on the T4C system and we hope to use it as our main information tool going forward.

“I am not afraid to trust the technology and use the information when required,” Robert added.

Robert explained that having the right grass is everything – especially in your first year of robotic milking.

“What really matters at start-up is to keep the cows moving, remain focused and not to get distracted.

All that matters initially is cow-flow and once this is achieved you can then start looking at other areas that may need improvement.

“Don’t worry too much; everyone will have small problems at start-up,” he said.

Philip and Robert Walsh will host an open day on their farm at Rath, Danesfort, Co. Kilkenny on Wednesday, June 21. The open day will run from 11:00am to 4:00pm. Click here for more information

Grazing and milking with a Lely Astronaut

Sean Kennedy, a dairy farmer from outside Attanagh, Co. Laois, will also hold an open day on his farm later this week.

Sean milks 58 spring-calving British Friesian cows on a 60ac grazing platform and the cows are let out to grass from March onwards. 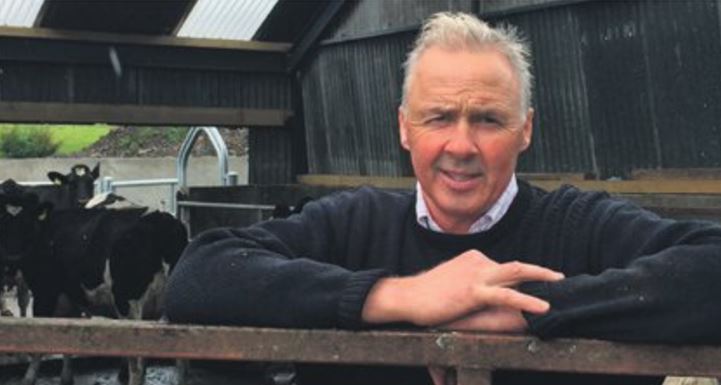 Sean Kennedy pictured on his farm

Sean explained that he had considered building a new milking parlour. But with the extra buildings, collecting yard and parlour, it would have cost more and he still would have had to milk the cows in the morning and evening.

“Lely Center Mullingar designed a clever plan to position the Lely robot at the end of the existing parlour, with one side of the old parlour converted into a compressor room and office and the other side left intact for separating and treating cows.

“It really suited my yard; building costs were minimal and made great use of the old parlour,” he said.

Sean admitted that he looked around for three years before making his decision which, he said, was also influenced by the scarcity of labour and the increasing spring workload.

“The robot was installed in January 2016 and I started milking in February.

It only took the cows four to five days and heifers two to three milkings to get used to the system. Putting in a Lely Astronaut is a change of lifestyle; as well as having more spare time, I have far more flexibility.

“I was milking 40 cows for 25 years in an old six-unit parlour and spending over four hours/day milking, whereas now I am still as busy as ever but not milking cows anymore.

“The working day consists of 20 minutes in the early morning carrying out the routine daily robot tasks. This gives me plenty of time to do other daily tasks around the yard, which really takes the pressure off in the busy spring time.

“The great thing is the flexibility I have in the evenings and the fact I don’t need to be watching the clock anymore wondering if it’s milking time.

“Also, I can head away on Sundays and there is no pressure to be back at 6pm.

“It’s a dream this year. The cows are so used to the system; there is no pressure in the spring with plenty of time available to feed calves, bed cubicles and clean the yard,” he added.

Grazing with the Lely Astronaut

Sean continued to say that the first year was demanding enough starting out.

It took the cows a while to get the hang of grazing. They fully understand the system now and are moving very well.

“I am operating an AB grazing system which ensures the cows are offered fresh grass every 12 hours. They are averaging 29L/day on 2.2 milkings and 3kg of concentrates,” he said.

“The knowledge and information is powerful and gives me control to react where necessary,” he concluded.

Sean Kennedy will host an open day on his farm in Barndara, Attanagh, Co. Laois on Friday, June 23. The open day will run from 11:00am to 4:00pm. Click here for more information