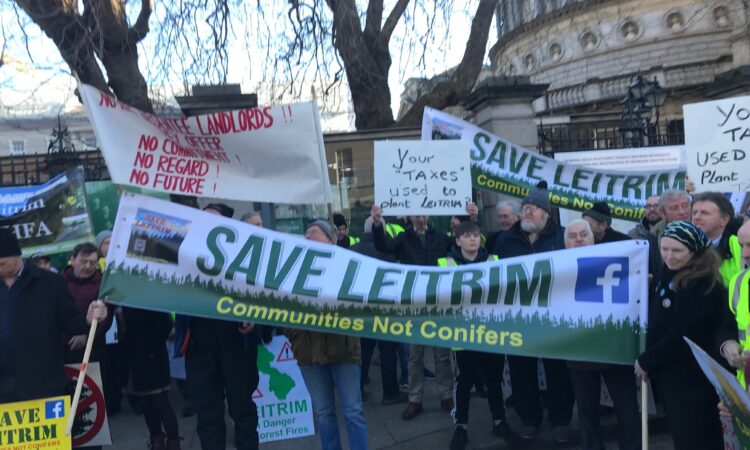 “Trees are replacing people” in Co. Leitrim, with forestry now covering 20% of the county’s landmass, according to protesters that gathered outside Dail Eireann this morning (Wednesday, January 30).

Approximately 100 protesters travelled from Leitrim and its surrounding counties in the north-west to partake in the demonstration today, calling for the Government to bring a halt to the rapid growth of coniferous forestry – most notably Sitka spruce plantations – that have sprung up in the region.

The event was organised and run by the “Save Leitrim” group – a grouping made up of local people concerned with the developments of recent years – most notably of investments by companies and entities from outside the county.

One of the organisers of the protest, Justin Warnock, said: “We need a moratorium. In advance of this [protest], the minister has called for this investigation into the effect of conifers in Leitrim. 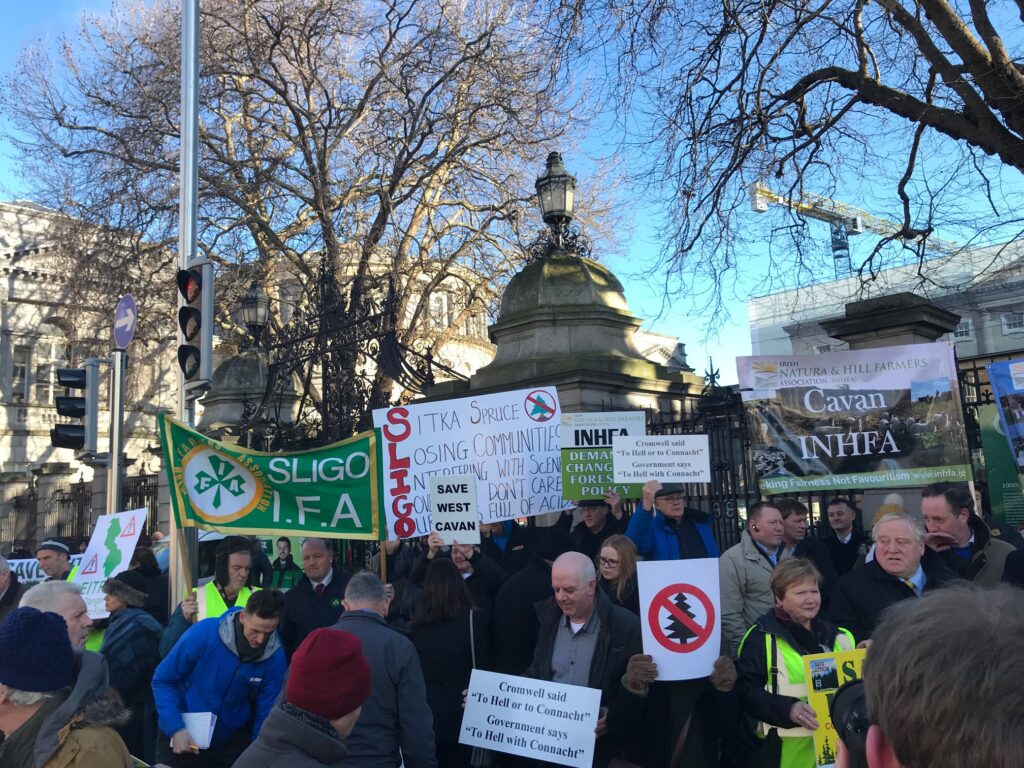 “There’s no point calling for that unless you have a moratorium first of all, on planting.”

Another organiser, Edwina Guckian, explained: “It’s important to get that point across that the forestry policy that they have now, the ‘Sustainable Forestry Policy’, is not sustainable and it is actually something that we’d never call forestry; it’s industrial plantations.

“There are several aspects to the mental health side to it, but one of the things that people come back saying to us is about the darkness and the lack of light. There’s a lot of people whose houses are completely surrounded who have no light at all – that really affects people. 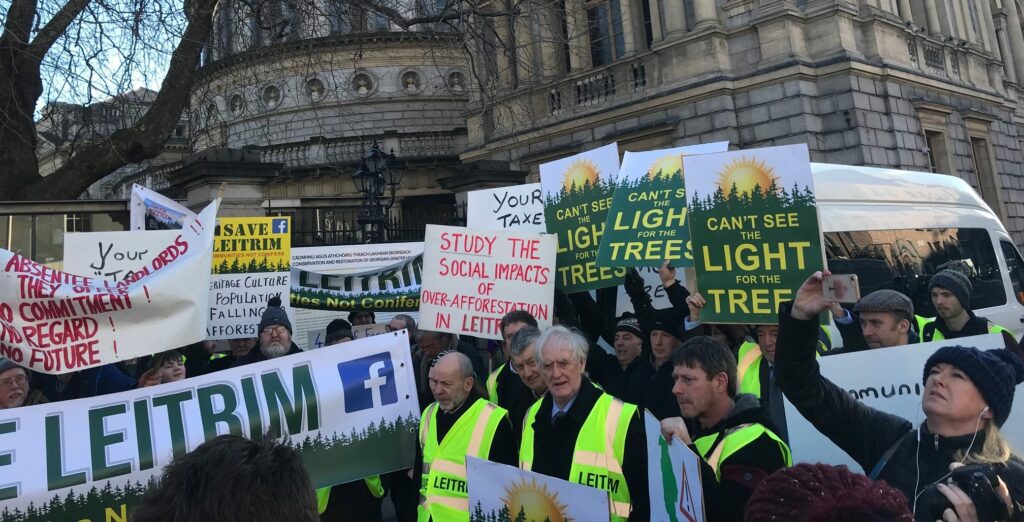 “It’s not just the actual trees physically being there, but the way they handle the people who are trying to stop this. A few ladies that rang us said: ‘we don’t know how to [stop them]’. Then, all of a sudden, there’s a digger on three sides of their houses planting round them and they knew nothing about it.

Some people were threatened by foresters when they tried to object to it. All of those things are having really significant impacts on people who have no idea how to go about even vocalising the problem with it.

The group encourages farmers to plant small groves of native trees on their farms, which would be beneficial to the environment – but not 50ha “blankets of forestry”.

Warnock added: “There’s 20% already gone; that has been lost to us. But for god’s sake, the rest of it that’s left – we’re going to fight for it – and that’s why we’re here today. We went through snow, slipping and sliding – but we got here.”

Another prominent member, Sean McLoughlin, pointed out the damaging impacts so far.

“The effects is that four schools have closed down in my parish – Aughavas – in the past years.

Farmers can’t compete with outside interests that are coming in and buying the farms around them. It’s just totally for the forest premium that they are doing this.

“It’s totally down to the premium that is paid with Irish taxpayers’ money. Pension funds, even vulture funds, are buying the farms from banks that have been taken over from farmers who could not meet their repayments.”

INHFA Mayo chairman Gerry Loftus said: “No one can compete with the forestry companies by dint of the tax incentives and the grants that are being paid to destroy our county and our communities.

“Schools are closing; populations are leaving rural Ireland – and we’re all being affected, hurt bit by bit.”

IFA Leitrim chairman James Gallagher commented on the review announced by the Department of Agriculture yesterday:

“I welcome this review and we in the IFA will work with the communities in Leitrim on their side of the story, on the impact it’s having on young farmers expanding land, and we also want to highlight that we’re having a meeting on February 5 in Manorhamilton where we’re going to have a speaker on land mobility.

We will be able to show that while long-term leasing of land – someone wanting to exit farming – could have a tax-free income equal to forestry; and at the end of the lease, 10-15 years, they’ll still have their land.

“But if they plant, they have a premium for 15 years – but after that it’s gone; they have nothing.”