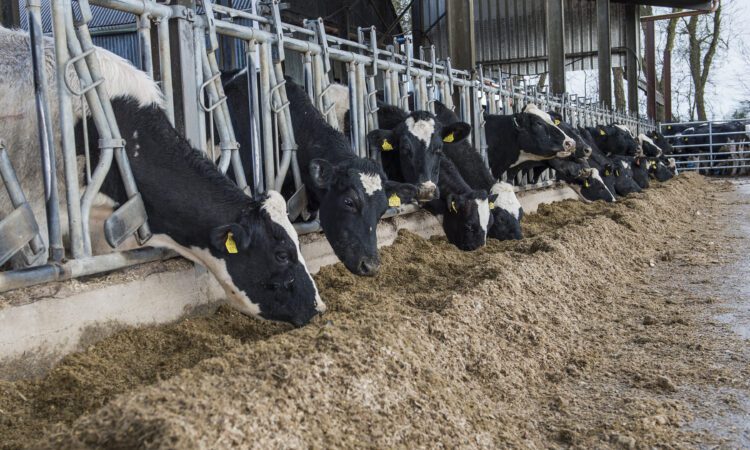 One of the key measures of efficiency and sustainability is the extent to which you are maximising the use of home-grown forage and silage in the winter diet of livestock.

Some of the key ways to achieve this are to:

To achieve both of these requires firstly that you grow good grass to start with and minimise the losses in dry matter (DM) and nutrients that occur during the conversion and storage processes.

Safeguarding both quantity and quality starts as soon as your grass is cut. You need to minimise those losses.

It might be tempting to cut grass later in the hope of getting more yield; the problem is that once cutting gets too late, grass quality – in terms of protein, digestibility and metabolisable energy – declines. As an example, after heading, the digestibility of grass falls by about 0.5% a day.

For good-quality silage at an acceptable yield, consider cutting just before heading. Although it might be tempting to use a low-cutting height to get more yield, lower cutting will give a lower-quality silage.

In addition, dead plant material in the base of the sward contains higher levels of undesirable micro-organisms that can hinder fermentation and increase aerobic spoilage (heating of the silage).

Cutting too low also increases the risk of introducing undesirable soil micro-organisms, such as clostridia into silage; increasing the risk of a poor fermentation, reducing its feed value, or even potentially contaminating the silage with listeria.

Effective wilting increases the DM percentage of the grass and reduces losses from effluent. It also means the silage will stabilise at a higher pH. A higher DM will also inhibit undesirable clostridia bacteria.

Unfortunately, as soon as grass is cut, sugar levels start to decline because they are being used up by the plant, since it is still living, and by any undesirable bacteria that may be present. Aim to wilt as quickly as possible to an ideal target DM of 28-32%, but no longer.

In good conditions you may be able to achieve this in less than 24 hours. To reduce wilting time, make effective use of mower-conditioners and tedding. But make sure tedders and rakes are adjusted correctly to avoid them hitting the ground and risking soil contamination.

Using the optimum chop length is crucial when harvesting grass because it has a big impact on how well it can be consolidated in the clamp.

It’s important to remember that silage is produced when beneficial bacteria ferment some of the sugars in the grass into lactic acid.

This ‘pickles’ the grass; preventing the growth of spoilage micro-organisms and preserving the nutrients. However, a good fermentation requires that air is removed from the clamp and the quicker you can achieve this, the better.

Too long a chop makes it more difficult to squeeze the air out particularly at higher DM. But too short a chop can also cause problems. So, as well as keeping knives sharp, ensure they are correctly adjusted according to the crop DM.

As a rule of thumb, grass with a higher DM requires shorter chop lengths. However if grass silage is being fed as part of a high maize diet, chop length may need to be increased to ensure there is sufficient effective fibre in the diet.

A quality additive doesn’t just help preserve the forage. Trials across a range of forages have shown that treating with a proven additive containing beneficial bacteria in the form of Lactobacillus plantarum MTD/1 – as contained in Ecosyl – can do much more.

Across 15 grass silage trials, DM recovery with MTD/1 was boosted from 91.8% to 95.5% of the original material ensiled. In other words, less of the silage was lost during storage.

Put another way, if 1,000t of DM were originally clamped, this would have equated to having an extra 37t of silage available to feed. That alone would go a long way to paying for the additive.

In addition, across various trials, Lactobacillus plantarum MTD/1 (as found in Ecosyl) has also been shown to:

Most importantly, MTD/1-treated silage has also been shown to improve milk yield by an average of an extra 1.2L/cow/day (15 trials, various forages). If you assume 200 days of feeding silage, based on that extra 1.2L of milk produced per cow per day, that’s an extra 240L.

From experience, a good-quality additive will protect feeding value and deliver an excellent return on investment, such as more milk or live-weight gain, in the majority of situations; provided it is applied properly and grass is cut at the correct stage of growth.

Other steps to get right in the quest to minimise silage losses include how grass is handled when filling the clamp, and how well the clamp is managed.

As mentioned already, good consolidation to squeeze out air is key. If you trap too much air in the clamp you reduce fermentation quality and increase aerobic instability problems (heating and waste) at feed out.

You can only really efficiently consolidate the top 15cm. So layers should be no greater than this depth during clamp filling, before being compacted and the process repeated with the next layer.

Pay particular attention to the edges, which are more difficult to consolidate, and avoid over-filling the clamp. Once consolidated, sealing the clamp effectively is vital to stop air/oxygen ingress, which is essential for fermentation and aerobic stability.

After sheeting, always put as much weight on top of the clamp as possible. That top weight maintains better density in the weakest part of the clamp, which is the top.

Remember also to pay attention to the ramp. As well as sheeting the rest of the clamp correctly, ensure there is at least half a metre of extra silage sheet at the front of the clamp and weight it down well all around the edge.

The cleaner the clamp area, the better. Mouldy silage or dirt in front of the clamp will contaminate the silage with undesirable bugs – potentially reducing quality and intake.

If you do have any spoiled silage, discard it. Never mix it with good silage. As well as being of poorer quality, it can also adversely affect the rumen.

To take silage out of the clamp, use a shear grab to maintain a smooth clamp face. This reduces the amount of air that gets in, so there is less risk of aerobic spoilage (heating) which can cause losses of nutrients and potentially production of mycotoxins. For the same reason, move across the face quickly to reduce the time that silage is exposed to air.

Also at feedout, avoid pulling or cutting the top sheet back too far once the clamp is opened and make sure you keep the front edge weighted down.

However, also avoid pulling the sheet back down over the clamp face because this creates conditions that encourage yeast and mould growth; increasing the risk of spoilage and heating.

In summary, making high-quality silage and managing the clamp properly can go a long way towards maximising animal performance while reducing concentrate costs.

One farmer who is striving to get more from grass silage is TJ Breen, who runs a dairy and beef enterprise with his brother at Scullabogue, Newbawn Co. Wexford.

In addition to expanding both the dairy and beef sides of the business, the Breens have been aiming to reduce their expenditure on concentrates, while not sacrificing the overall nutritional requirements of the herd. 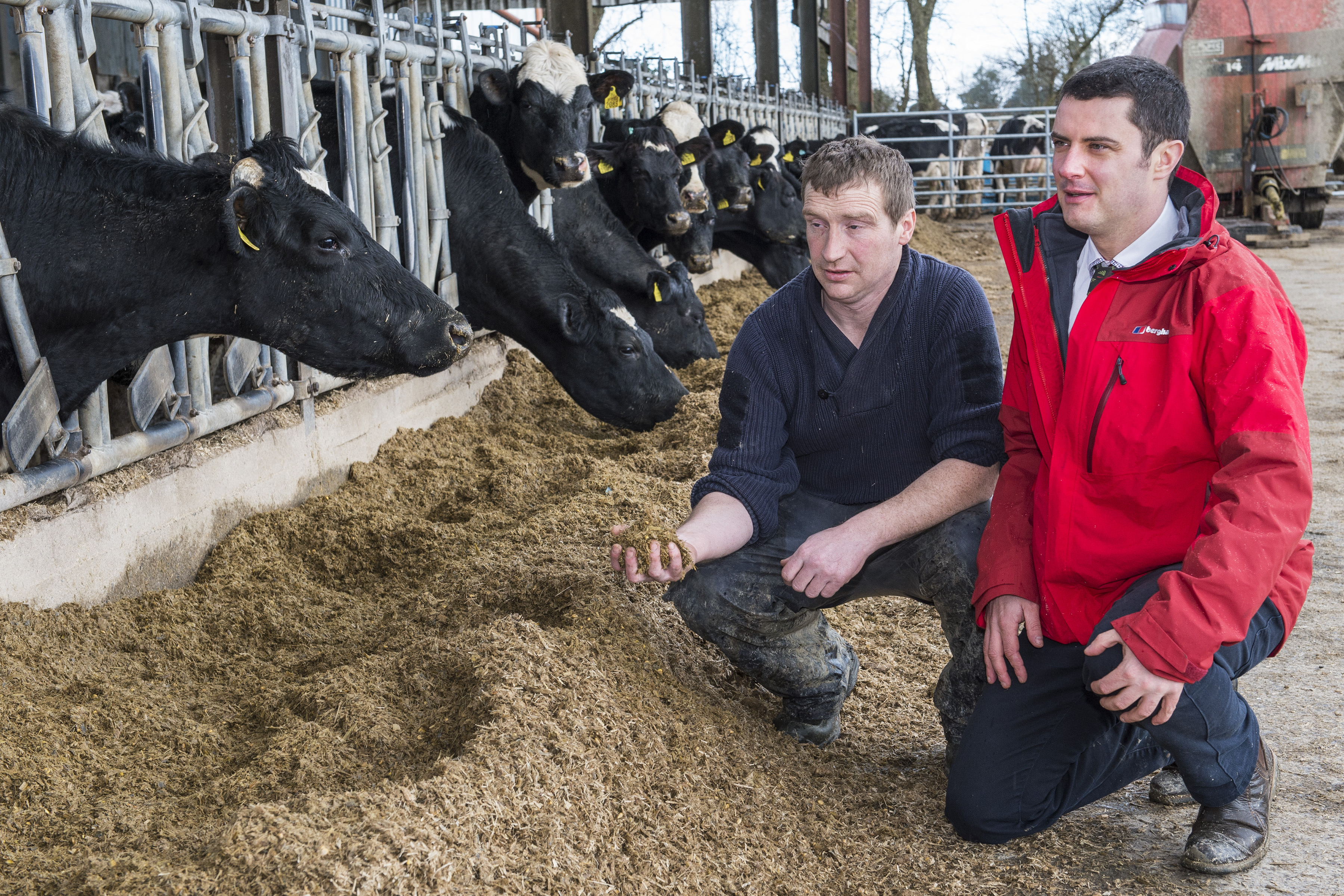 As well as moving cutting date for first-cut grass silage forward from June to May to improve quality by cutting before grass comes into head, they have also started using an Ecosyl additive.

Since making these changes, the brothers have noticed an increase in energy content and digestibility on their silage analysis; increased DM intakes; increased milk yield; increased daily live-weight gain in the beef herd; and less silage waste.

“We started cutting a bit earlier to get better-quality silage when the weather permitted,” explained TJ.

If you feed better silage, you get better results. The additive has helped too. There’s a difference in feed value and the cows seem to eat more silage and look in better condition. There’s also less waste on the silage – so less waste to throw away.

“Previously, we used to try to get more silage bulk. But you have to get a happy medium between quantity and quality,” he added. Click here for more

Sponsored by Cut to Clamp