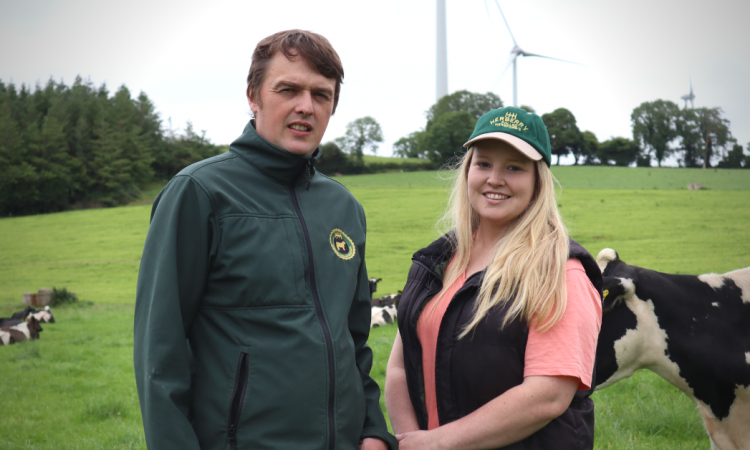 The benefits of optimising soil fertility with an effective liming programme on farms are well known.

Dairy and beef farmer, Ray Hunt from Cashel, Co. Tipperary, was interviewed about the key role that a planned liming programme plays in his farming enterprise.

Ray, with his fiancée Veronica and his parents, has successfully expanded the dairy farm from 56 to 180 cows in under six years and he maintains that active soil fertility management played a key role in this expansion.

Due to our high levels of rainfall, Irish soils have a natural requirement for lime to control soil acidity and maintain a favourable soil pH for crop growth, nutrient release and soil quality.

In 2016, two thirds of all Irish soils tested had suboptimal pH levels, indicating that lime application was required. According to Teagasc, in some counties this figure was as high as 80%.

Irish soils are some of the most productive soils in the world for both grass and grain production, due to our temperate climate.

However, without the utilisation of lime as a key component of soil fertility, this competitive advantage can be eroded. For mineral soils, farmers should aim to maintain soils at pH around 6.3 for grassland and 6.5 for tillage.

There are proven commercial benefits to utilising lime to maintain soil pH. To maximise productivity, Teagasc advises farmers to test their soils to make informed decisions about fertiliser and lime requirements.

Advertisement
Optimising the pH of grassland soils can increase the annual output of grass by at least 1t DM/ha which, according to Teagasc, is worth €181/t of grass dry matter (DM). Using lime alone can release up to 80kg of nitrogen (N)/ha/year from the soil for use by grass.

“We can see from the liming that we’ve done over the last number of years that it has grown more grass and that we are getting better utilisation of fertiliser,” said Ray.

According to Teagasc, a dairy farm making a €100 investment in lime will get an annual return of approximately €725 through extra grass production. This represents a return of €7.25 for every €1 invested in lime.

The application of lime will provide a continuous return on investment (ROI) for a number of years. Typical lime maintenance requirements are 2.5-5t/ha every three to five years depending on location and rainfall levels.

In the video (above), Ray explains how grass growth is maximised economically and efficiently with the use of lime which he purchases from his local Grolime certified quarry.

“For us it’s a no brainer to use Grolime here as it’s the most economic and efficient way of getting the best utilisation from our grass,” Ray concluded.

Grolime is the certified trademark under which companies who meet necessary criteria are authorised to promote and sell their ground limestone.

All Grolime certified companies are licenced by the Department of Agriculture, Food and the Marine to manufacture and sell ground limestone for use as a soil conditioner in Ireland.

In addition, all Grolime companies undergo independent testing bi-annually for compliance with the national specification for ground limestone. To view the full list of Grolime approved companies, just click here