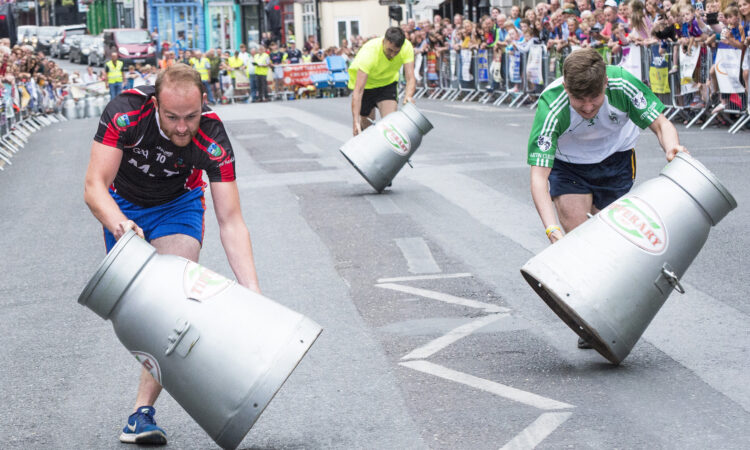 Damien Bourke, Bansha, Co. Tipperary (on left) is pictured on his way to victory in the semi-final of the Mens All-Ireland Churn Rolling Championship in Tipperary town at the weekend. Image source: O'Gorman Photography

Churn rolling has a long history in Tipperary – dating back to the 1950s – when it was initiated by workers at Tipperary Co-op. The co-op is still the main sponsor.

The sport involves racing a tilted churn, at speed, up Tipperary’s main street. Thousands of people turned out to witness the “edge-of-your-seat spectacle” on Saturday evening last (July 14).

This year’s championship was condensed into a one-night competition, with a contribution from the Tipperary Vintage Rally. Meanwhile, the night’s joviality and race commentary was provided by Willie Ryan aka “Bun”.

The heats consisted of the girls’ and boys’ mixed juvenile championships; the under-17 minors; and the senior men’s and women’s championships.

There was just a little breeze to cool the competitors as they prepared for a sprint up Tipperary town’s main street while in control of a weighty milk churn.

To ease everyone into the night’s fun, milk maids ran up the street, trying to avoid spilling a drop from the glass of milk they were balancing on trays.

At times a churn might wobble as a contestant glanced over their shoulder to see who was on their heels.

From time to time, a churn being raced at speed struck the road surface with such force that sparks flew.

As the speed escalated, spectators knew it would it would be a photo finish, with the title of minor champion finally clinched by Andy Richardson.

She succeeded in making it into the final race and in a nail-biting finish, she was first to reach the line in a time of 14.2 seconds.

It was a different affair in the senior men’s championship which was awaiting a new titleholder, as the reigning champion, Kevin Kinane, was unavailable for this year’s challenge.

In the final moments of the four-man clash, it became a race of two men – Jack Whelton and Thomas Nash.

The men’s runner-up was Jack Whelton of Lattin; third place went to Damien Bourke of Bansha; and fourth position went to James Doherty of Lattin.

Meanwhile, the minor runner-up went to Andrew Richardson of Cordangan, and minor third place went to JJ Bennett from Bohertrime.

As for the under 14s, the mixed champion went to Evan Ryan of Bohercrowe; runner-up went to Leah Carew, Lattin, third place Alexandra Porte, France and fourth position went to Adam Ryan from Dromline. 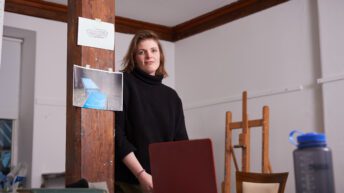