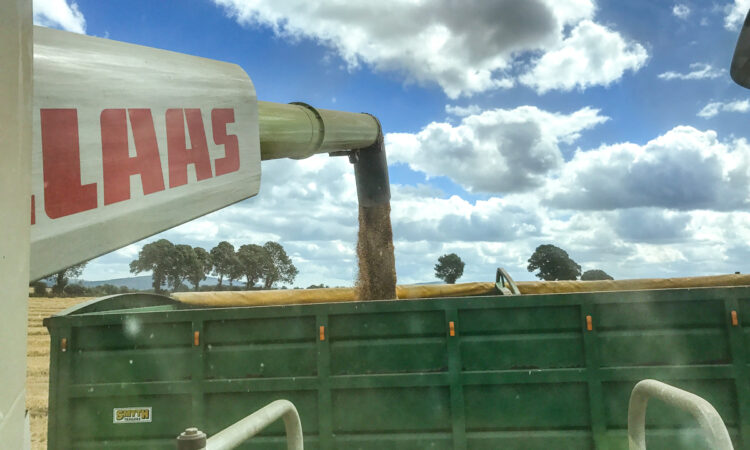 Kevin Nolan is no stranger to AgriLand. He appeared in our CROPS WATCH series this summer. At that time, he was managing different wheat crops – some of which were struggling due to the wet winter and spring.

Although the year brought challenges, the man at the head of Nolan Farming is now focusing on the positives. He is sowing grass crops for dairy farmers, planning drainage work on the farm and looking at selling grain now for 2019.

He was busy harvesting winter wheat outside Tullow, Co. Carlow, when AgriLand visited. The Claas Lexion 760 – with a 30.5ft header – was making light work of the job at hand. Kevin chatted away, as the combine steered itself. 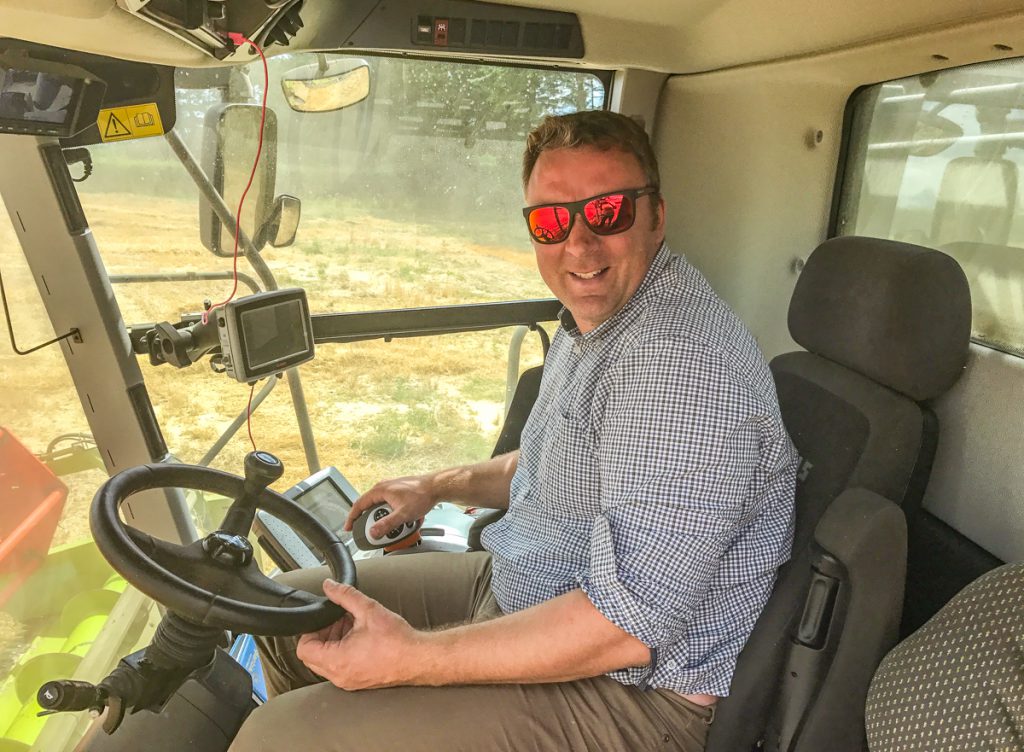 “It’s nearly time to look back on the year. The tramlines are not too bad in this field, but in some fields the tramlines are a foot deep. It really shows you what we’ve been through this year; we’ve gone from that to being very deficient in moisture.

I dug down with a spade and I have dust at 8in. The recent rain we got was a big relief, but there is still dust.

“Grain moisture contents are good; that’s a big help because we haven’t turned on the grain dryer this year. It’s a massive saving on labour, diesel and general work around the yard.

“Grain is harder to thresh this year. I know from talking to different grain merchants it’s causing a lot of problems drying because there’s barley going in with awns,” Kevin noted.

Kevin is generally happy with how his crops are yielding considering the season we are having.

“Winter barley averaged just over 3t/ac. I was disappointed with it, but it’s the weather and that’s just the way it is. We had a beautiful crop of Husky [oats]. It yielded just over 3.1t/ac, but moistures were down as low as 12-14%. 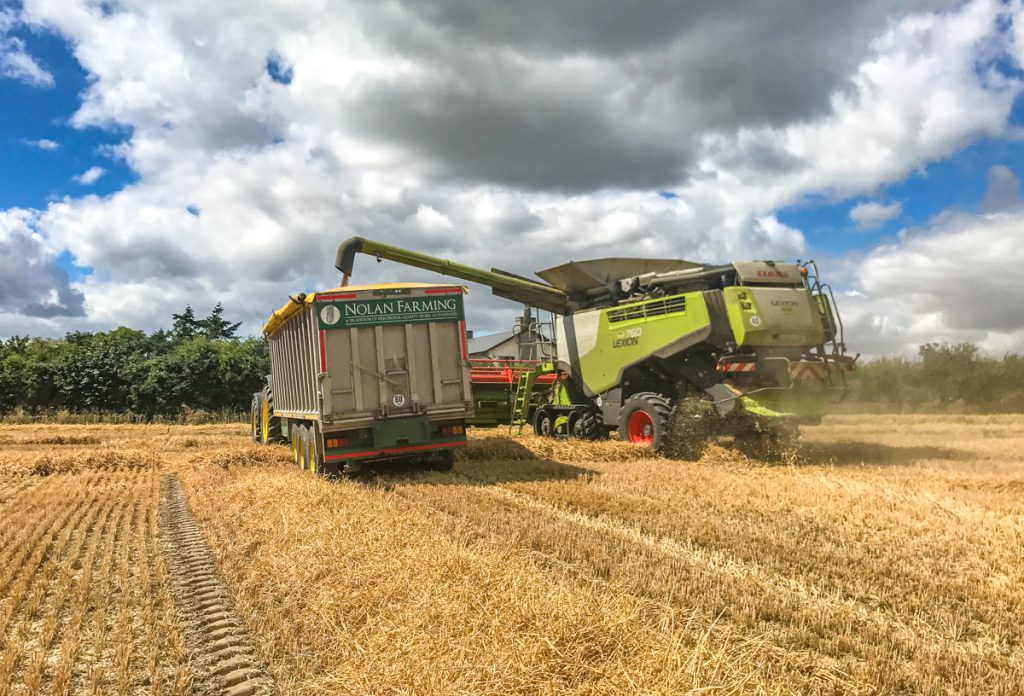 “Rotation is king. We have potatoes in the rotation now with the O’Gorman brothers and that’s where we got the best yield; we had 4.09t/ac off that ground.”

Kevin will move to spring barley once the winter wheat harvest is complete.

“We have the spring barley sown on a couple of nice pieces of ground that might be a little bit heavier, so I’m hoping that it will be OK. Hopefully the ground will hold that moisture. We’ll be cutting that at the end of next week.

The early wheat proved a point that it had matured before the really hard drought got to it.

“I’ve cut some spring barley on contract and I’ve seen yields of 1.5t/ac. If you listen to other farmers around the country, they will be lucky to get 1t/ac. People talk about the increase in grain and straw prices, that won’t make up for that yield loss.”

Kevin is a big fan of technology. The Carlow farmer carries out yield mapping from the combine for all of his fields.

“We had a Claas sensor out during the year and we made maps of all the fields of wheat. It was really interesting. Before we went to cut the fields, we could see that there was consistency (for biomass) in all of the fields. It was nice to see that most of the farm was within the same range. 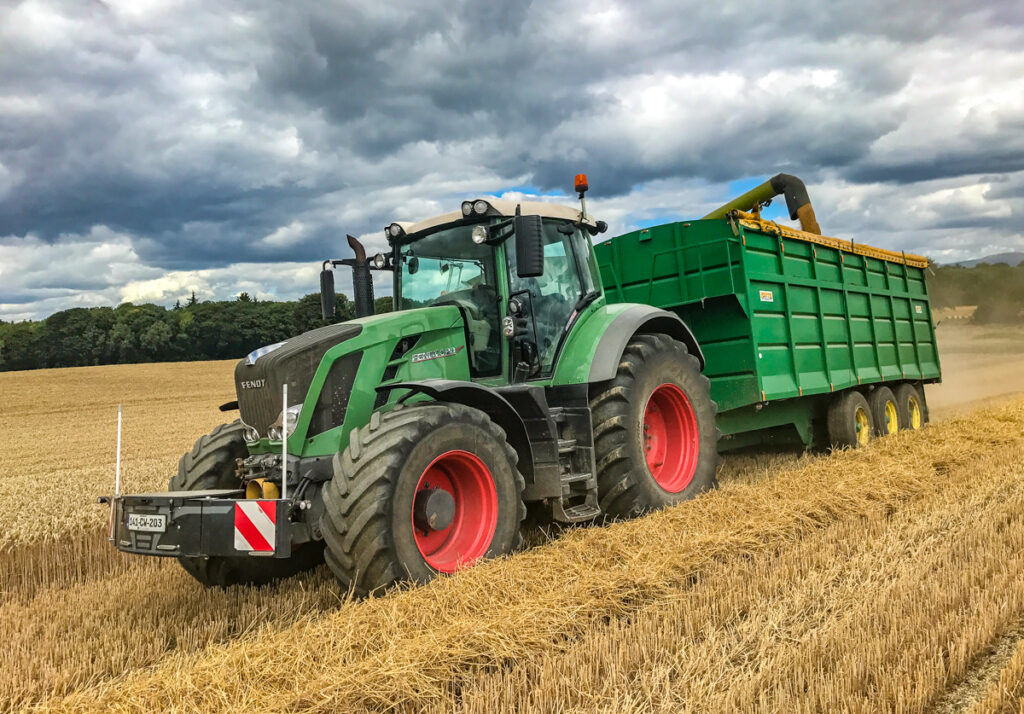 Kevin used a lot of different products on his crops, which was seen in the CROPS WATCH series in association with TerraChem.

“The Uplift is rocket fuel, I really think that’s a good product and I’m a big fan of liquid nitrogen.

Kevin is well aware of the situation in parts of the country where drought has lowered yields significantly.

“We have to think of the farmers in other counties who are going to have all of these bad crops. 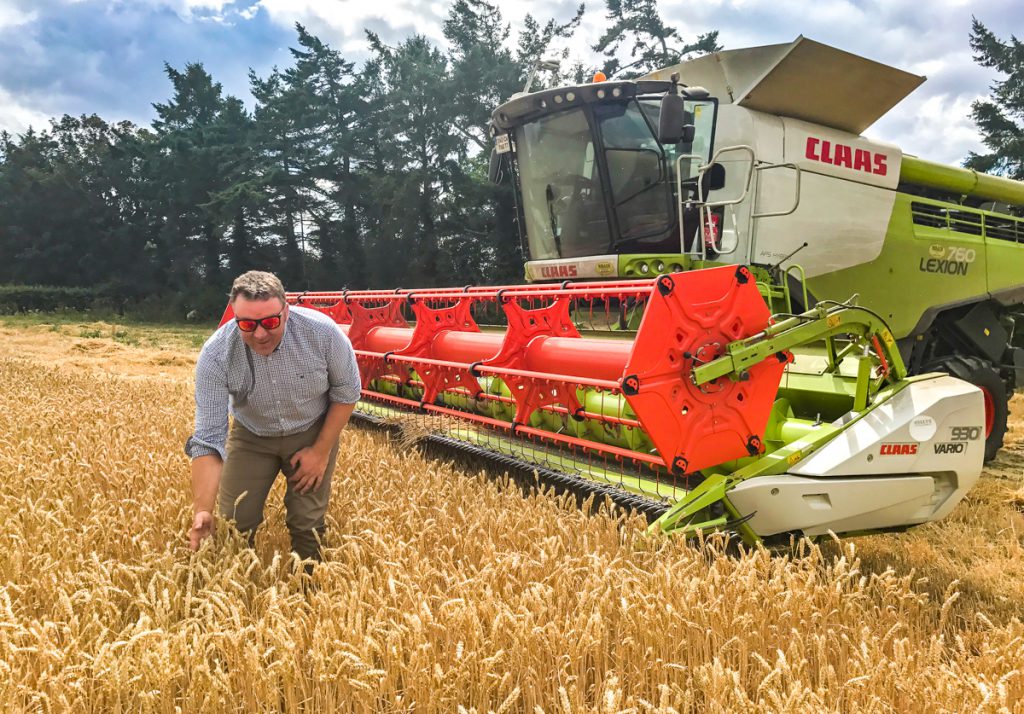 “I think it’s time that farmers be honest about their yields. If those farmers with the poorer crops are going to get looked after this year, farmers need to be honest.

The German farmers have looked for aid and I think it’s only fair that if our cousins in Germany are being looked after those farmers in the worst-affected areas here are looked after – the genuine cases.

“At the end of the day, the tillage industry is shrinking so much, if those people aren’t looked after, they won’t be in business next year. It’s very serious.”

Kevin sells his grain to merchants. He usually forward sells some grain and is already thinking about next year’s prices.

“All the grain will go into the merchants and it’s sold on trust, a final price will be agreed in mid-September. Green prices at the minute are in a great place and the price could go up another €20 or more. Tillage has had a good few tough years, so it’s nice to get a good one.

There’s a great chance to sell grain now for next year at €200/t green.

“There’s no reason for it to be as strong next year. In previous times, when we had a high-grain price, every farmer sowed every corner of their farm – even the less productive ones. 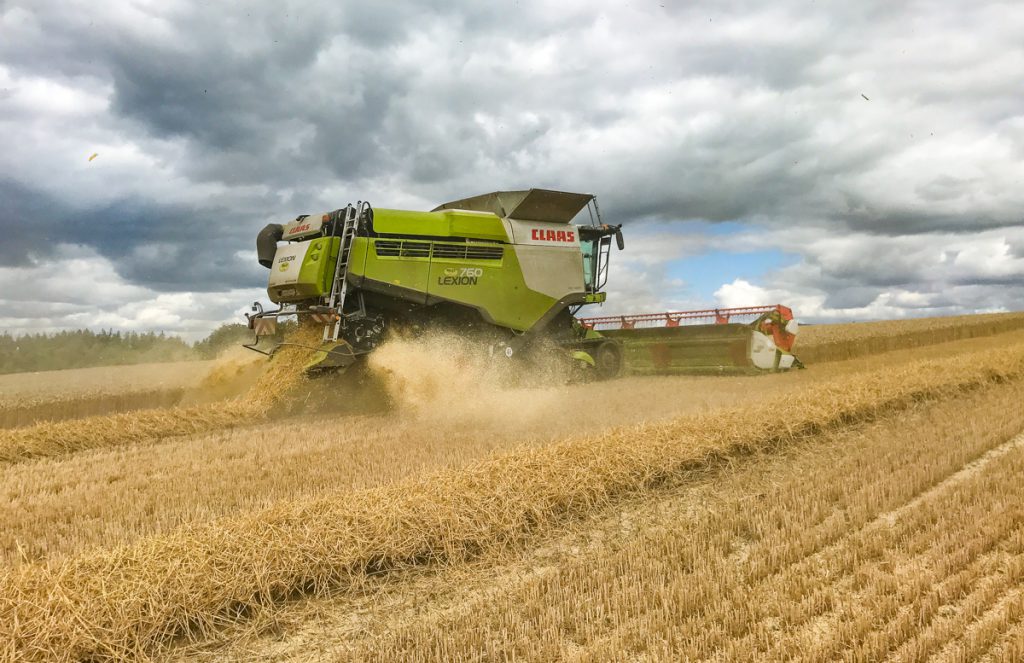 “That’s what will happen on a global scale; people will sow all those acres because it makes sense when the price gets so high,” Kevin explained.

If weather is good in eastern European countries next year, it could change the price very quickly.

Kevin cuts his crops and leaves the straw to be baled by the customer purchasing the product.

“The straw market is on a new level. We sell all the straw. It’s sold before it goes through the combine and it’s sold by the bale. It’s great because, with a good few acres to cover with the combine, it makes the whole operation a lot smoother.

“Some people would say it’s a peach of a year, but I’ve seen the other side of straw when it rains and it’s difficult to get straw baled.

I’ve learned that we can do more by doing less and I’m very happy with that.

“It’s a terrible situation that the dairy and stock farmers are in; but I think it will make the tillage sector a lot healthier in the long run because now I think they realise, all of a sudden, that the tillage farmer has potential to work with livestock farmers.

I never thought that we’d have a situation where I’d be twin cropping in Ireland; we have grass gone in after winter barley.

Kevin is awaiting seed for forage crops and plans to sow more next week, adding: “We have an order gone in for Westerwolds, but we have sown some of the acreage with Italian ryegrass. 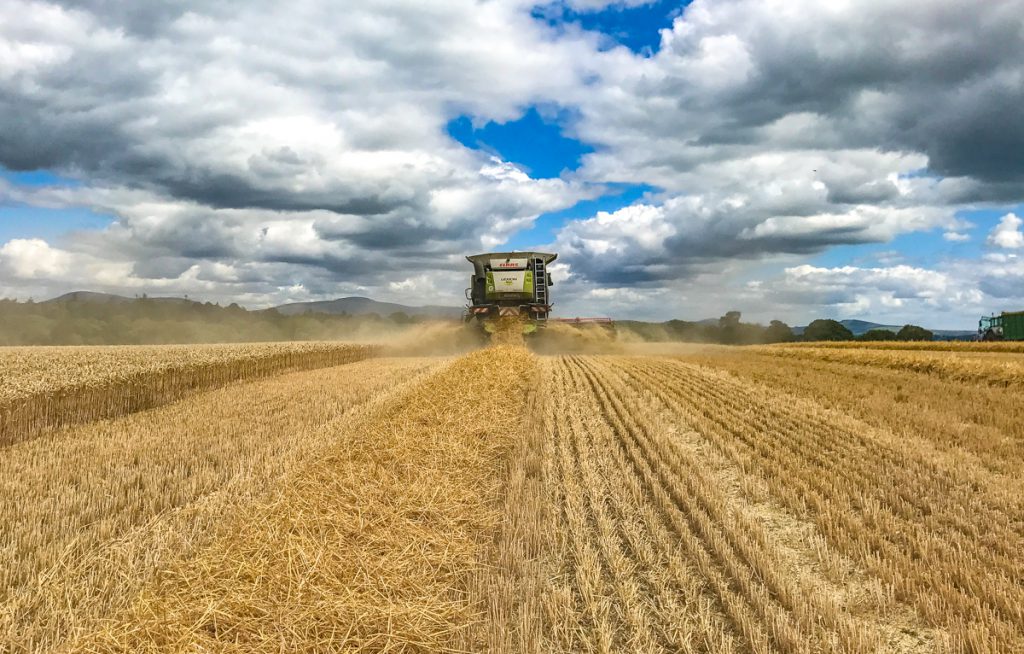 “The soil is very dry at the moment. In theory it’s late, although I think in reality the ground is very warm so they’ll catch up very quickly.”

At the moment we have 136ac sown between the Westerwolds and the Italian ryegrasses. To the best of my knowledge that’s all spoken for and we’ll sign contracts once they’re green and above the ground.

Taking straw out of the workload frees up a lot of time. Office work and planning ahead is key to a successful farm.

Saturday is a day booked into the office – for crop planning – because it’s supposed to be wet all day.

“From that then, I’ll pick a few varieties and then I’ll start thinking about selling because I’ll know the areas that I’m going to plant. Even if I only sold a few tonnes of each crop, it would be time well spent.

“The weekend is going to be wet and we’ll use that for family time. Once the work is done in the office on Saturday, we’ll probably go away on Sunday and Monday.

“I’ve no involvement in straw and there’s no grain drying this season, so it gives me that time to go away,” Kevin explained.

“I have three trainee combine drivers at home – Conor, Aoibheann and Cillian. They’ve all been up on the combine and they love spending time with me on the combine. Aoibheann even brings a few books with her; it’s lovely, especially when the days are long.”

Dry weather has a lot of positives

While the drought has caused yield losses across the country, Kevin is looking at the positives and plans to get some drainage work done, as well as other jobs.

“We’re going to get drainage work done now. That’s a positive about the dry year. There will be some much needed remedial work done.

“It gives people a chance to get hedges cut and stubble grubbing done. We will all suffer a bit in this dry weather, but it’s actually setting people up very well because you can have everything 110% in order early for next year’s crop.

“A dry year is a great year to subsoil headlands – all those jobs that get put on the long finger in other years,” Kevin concluded. 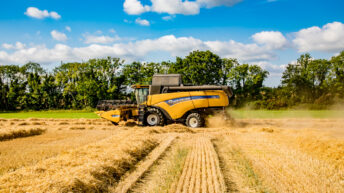