Tickets now on sale for ‘The Farmer Wants a Wife’ 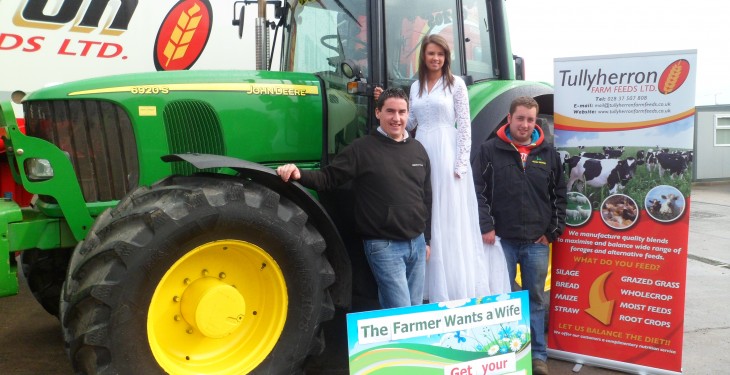 Southern Area Hospice Services are delighted to announce that tickets are now on sale for ‘The Farmer Wants a Wife’, an exciting new fundraising event which takes place in the Armagh City Hotel on Friday 11 October 2013.

‘The Farmer Wants a Wife’, which is being very kindly supported by main sponsor, Tullyherron Farm Feeds Ltd, and also by the Ulster Farmers Union and Alan Milne Tractors, will see a number of eligible farmers compete to win a date with a potential future wife from the audience!

On the night the eligible farmers who have volunteered, or have been volunteered, to take part, will be interviewed by MC Malachi Cush, when they will do their best to ‘woo’ the ladies in the audience. The farmers will also have the opportunity to perform a talent or party piece as part of their interview in an effort to further impress…jiving, singing and brush dancing are just some of the treats which the farmers have in store.

Following the interviews, the audience and the judging panel, which includes farmer’s wife, blogger & author of ‘Would You Marry a Farmer?’, Lorna Sixsmith, and President of the Young Farmers’ Clubs of Ulster, Martyn Blair, will place their votes to determine who the winning farmer is, and if any of the ladies in the audience are blown away by him they can bid in an auction to win a date with him.

Following the show there will be music by ‘Colorado Fever’ to finish off the night.

Kieran Shields from Tullyherron Farm Feeds said: “We are delighted that there has been a positive response towards this very worthy event and that all the spaces have been filled by local single farmers.  We hope to see a good crowd on the night to support the Southern Area Hospice and the farmers which should prove to be a great night’s entertainment!”

Anne Mac Oscar from Southern Area Hospice Services thanked the farmers who have volunteered to take part and encouraged people to come along and support them saying, “We are working hard to ensure ‘The Farmer Wants a Wife’ is a great night out for everyone, whilst raising vital funds for the Hospice. I would encourage as many people as possible to come along on the night and support the farmers by voting for them”.

So ladies, if you’re on the lookout for a farmer, or even if you’re not, get yourself to the Armagh City Hotel on Friday 11 October for a night not to be missed!

Photo Caption: Farmers, Gareth Feenan and William Murphy join Hospice Volunteer, Emma Donaghy to encourage people to get their tickets for The Farmer Wants a Wife. The Farmer Wants a Wife will take place in The Armagh City Hotel on Friday 11th October to raise funds for the Southern Area Hospice Services. Tickets available now – only £10 each!