The art of crook making is still very much alive 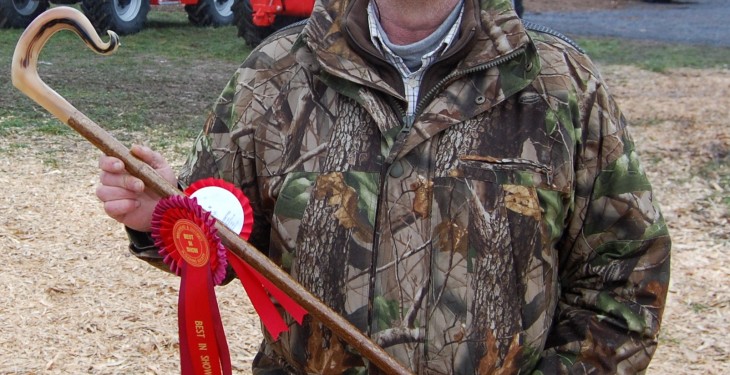 An Irish-made shepherd’s crook is quite the accompaniment to be seen walking with these days, according to decorative stick maker Laurence Barkey.

The Middletown man won best in class for his work at last weekend’s Mullahead Ploughing Match in Co. Armagh.

“It takes a full 12 months to complete the process, starting from scratch,” he said.

“The first requirement is to get a staff (stick) of the right length and quality. I prefer hazel, which I find growing in local hedgerows. Once I have got the sticks that I want, they are left to season for a full year.

“This gives me time to find the rams’ horns that I need for the heads of the various crooks. There is an increasing demand for crook heads made from Indian buffalo horn, he said.

Fashioning a horn is by no means a simple process, according to Barkey and it takes a least 52 hours’ work to get the finished article just right.

“The process begins with me boiling the horns. This both removes the marrow and other organic material from the inside of the horn while, at the same time, making them more pliable, from a shaping point of view.

“After a couple of hours of boiling the horn is placed in a flat steel press and flattened. It then goes through a further series of compressions, which results in a more circular cross section across the horn. Heat is constantly applied during the compression stages,” he said.

Barkey said to begin the final shaping the head end of the horn is pressed between two steel channels, which allows for the formation of the neck.

“Further heating softens the horn so that it may now be forced around a wood former to give the basic crook shape. After that it’s a case of decorating the head to the preference of individual customers,” he said.

Barkey is currently selling his crooks to customers throughout the UK and Ireland. They retail for prices between €100 and €140.