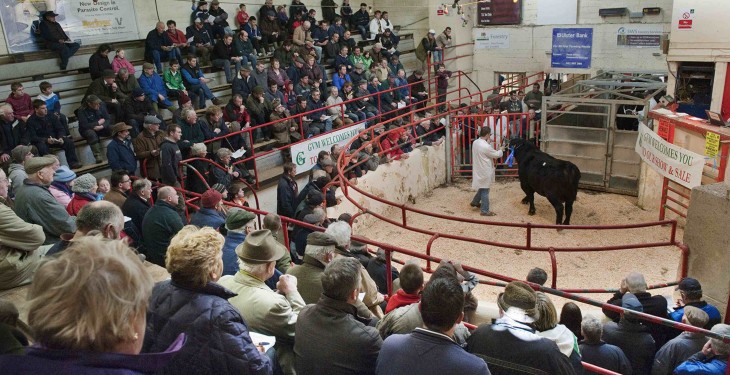 With the Single Farm Payment (SFP) released last week, many farmers will be putting their hands in the ring at weanling sales around the country.

With this in mind, AgriLand spoke to a number of mart managers across the country to get an insight into the trade. In most areas of the country, the weanling trade is only starting to kick-off. Mart managers suggest with the good weather up until now, farmers were in no hurry to sell off stock. But it is expected that with the unsettled weather this week numbers will jump.

A significant feature in the marts at the moment is the increased numbers of cull cows. Many mart managers feel this is an an indication of destocking in the suckler sector.

“Farmer-buying activity keeping the trade going,” according to Stephen Hannon, mart manager in Mohill. “The trade is going well, with high-quality lots getting as much as €3kg,” he noted. Hannon said numbers have been quite high up to now, however he expects this week’s rain should improve things.

“A big feature of the trade at the moment is the volume of cull cows being sold,” he added. Hannon has also observed that “significant destocking is taking place in the suckler herd”. He bemoaned the fact that Budget 2014 offered little to address this and, referring to the new genomics scheme, he said “€60 won’t make much impact”.

“Weanling trade is going very well here in Ennis,” noted Martin McNamara, mart manager. “High-quality lots are achieving as high as €3kg,” he said. Farmers are the main driver of the trade in Ennis this year with exporters are not as busy as other years, he observed.

“This is having an impact on the market, with lighter lots more suitable to farmers out performing heavier types which shippers prefer,” he said. “Heifer trade is especially strong at the moment and, as is the situation all over the country, cull cows are also appearing in high numbers,” McNamara added.

“Huge numbers of weanlings are starting to come out this week and for the next few weeks in Loughrea,” according to its mart manager, Jimmy Cooney. “Lighter stock between 250-300kg are selling well and achieving €2.50kg-€2.80kg for good-quality weanlings…Heavier lots are not performing as well this year as exporters are less active this year.”

Numbers are starting to increase rapidly in Loughrea, Cooney noted. “Farmers were in no hurry to move stock, while the weather remained good. This week’s rain though has changed that,” he said. “We were selling weanlings much earlier last year with the poor weather, farmers came out sold much earlier,” he added.

“Cull cows are being sold in significant numbers,” he stressed. “It’s been a tough couple of years for many famers in the suckling business and many are getting out,” he observed.

Richard Harnett, mart manager in Castleisland, said the weanling trade in the Kerry area has “improved quite well” since the trade began back in August for autumn born calves. “Spring born lots are coming out now. These types are coming out later than other years,” he noted.

According to Harnett, farmers were “getting cheap kgs on their born calves spring on good grass as the weather was good”. “Heifers are making as much as bulls in some cases in Castleisland,” he noted. “Heavy bulls are not doing as well with shippers not as active as other years.”

In terms of prices: “Lighter stock are the top sellers, with 330-340kg lots are making €2.50kg – €2.80kg,” according to Harnett. He has also noted “increased numbers of cull cows”. “In Kerry significant numbers are switching to dairying,” he added.