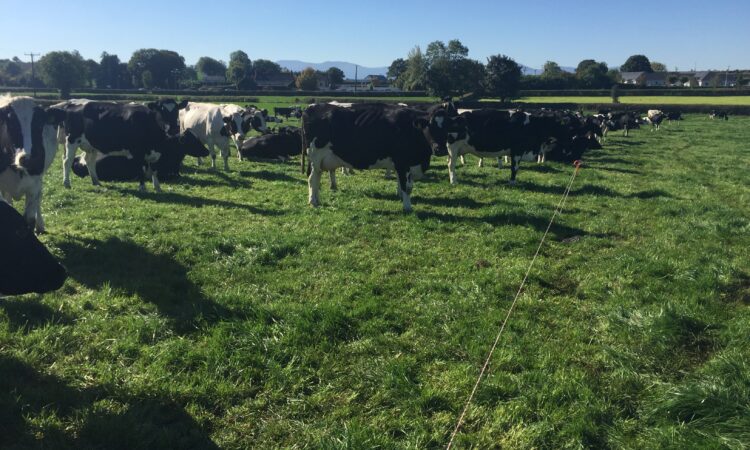 Located just a stone’s throw away from Clonmel, Co. Tipperary, Paddy O’Gorman is aiming to produce 100,000kg of milk solids – from a targeted herd of 200 cows – in the coming years.

After enrolling in the Teagasc/Glanbia Monitor Farm Programme four years ago, the Tipperary native marked the progress he’s made at a farm walk earlier this week.

Paddy has almost doubled the size of his dairy herd in the last decade, since he took over the running of the family’s farm.

After studying structural engineering in Cork Institute of Technology and spending some time in Australia, Paddy returned home to take the reins in 2009. Paddy also completed a Green Cert, attended open days and became actively involved in discussion groups. 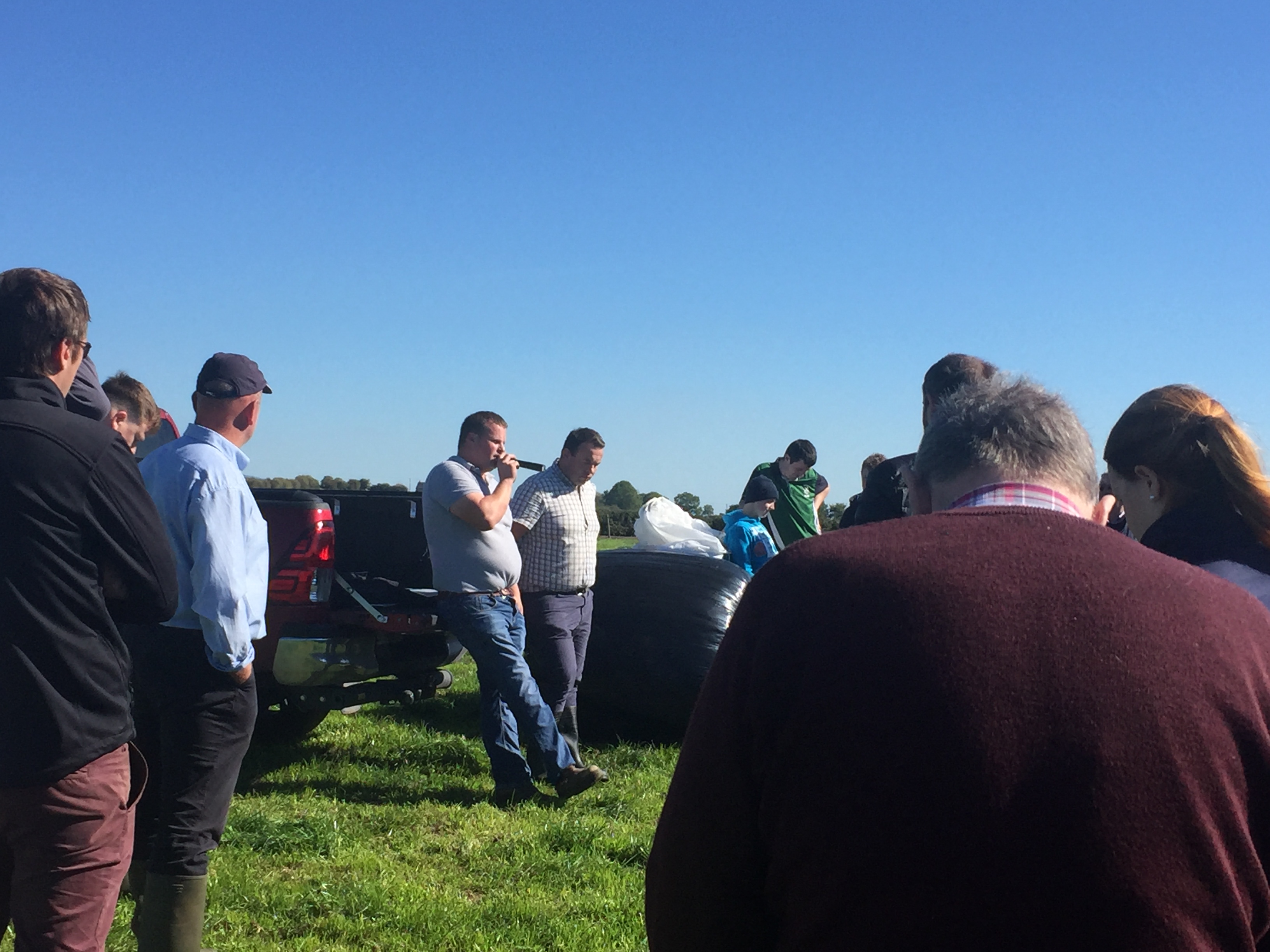 At the time, the Tipperary-based holding was home to a 100-cow dairy herd, while all of the calves were kept on the farm. However, Paddy made the decision to focus 100% on dairy farming.

In total, he’s farming 100ha. An additional 30ac were brought into the system this spring. But the total area farmed has actually decreased since he took over the day-to-day running of the business.

With the move to specialised dairy farming, the beef enterprise was ceased and the leasing of a stand-alone parcel of 60ac – rented on a year-to-year basis – was also ceased.

At the time, it was unusual for people to be decreasing land when they were increasing cow numbers; but I dropped that and 30ac of other ground has come in instead.

“It’s joined to the outside block, so it’s a lot easier to manage than the 60ac,” Paddy told those attending the farm walk on Thursday. 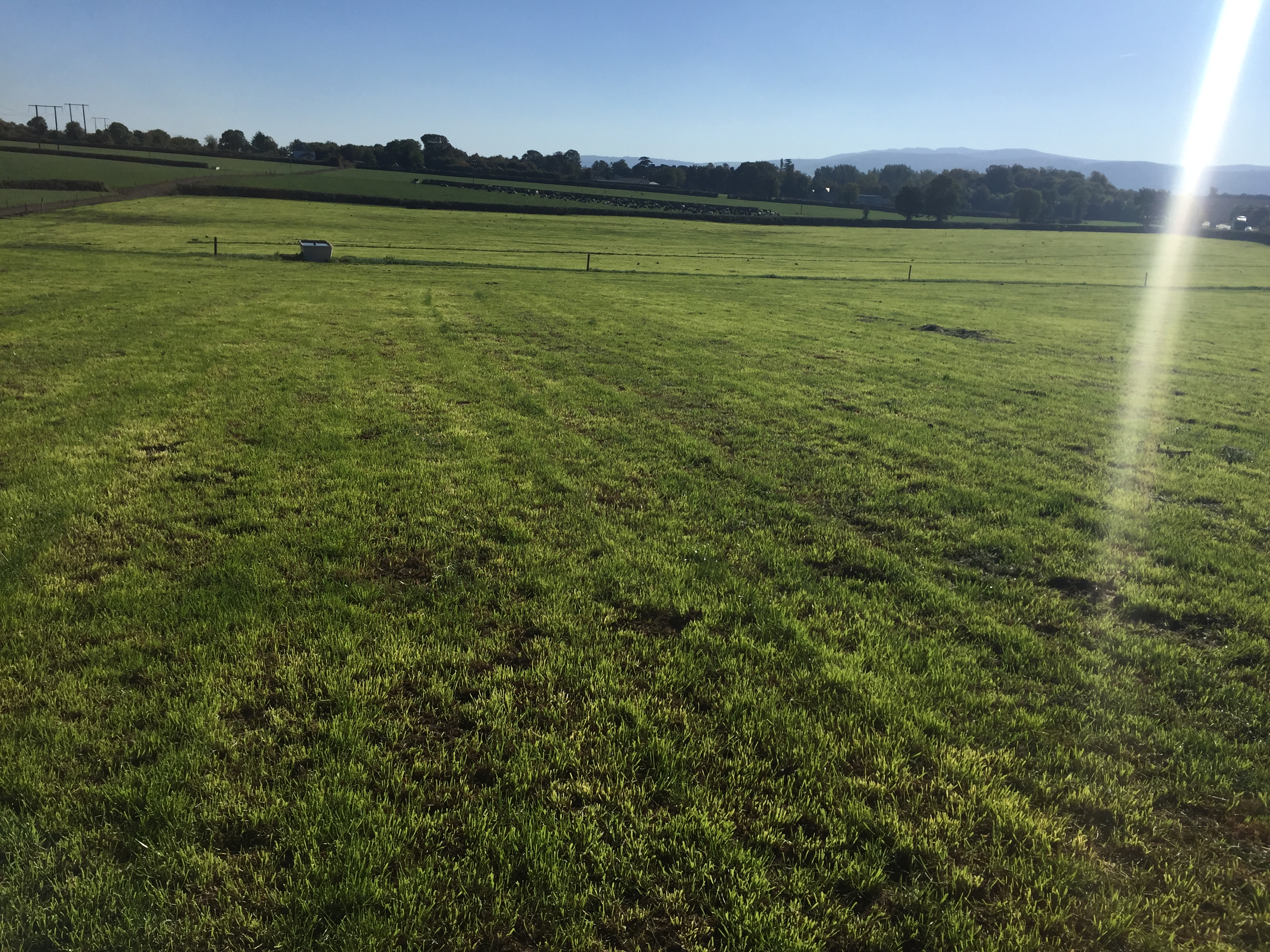 Although starting from a relatively low base in 2014 – the year before the abolition of milk quotas – when Paddy’s cows yielded 4,330L of milk or 337kg of milk solids on average, considerable improvements have been witnessed since.

Last year, milk yield stood at 5,117L/cow, while 416kg/cow of milk solids were sold. Improvements have also been witnessed in the quantity of milk solids sold per hectare – climbing from 701kg/ha in 2014 to 1,160kg/ha last year.

A special focus has also been placed on grass utilisation and fertility. In 2015, the farm grew 13.2t/ha; this increased to 14.6t/ha last year. Over the same period, the herd’s six week calving rate rose from 76% to 85%. 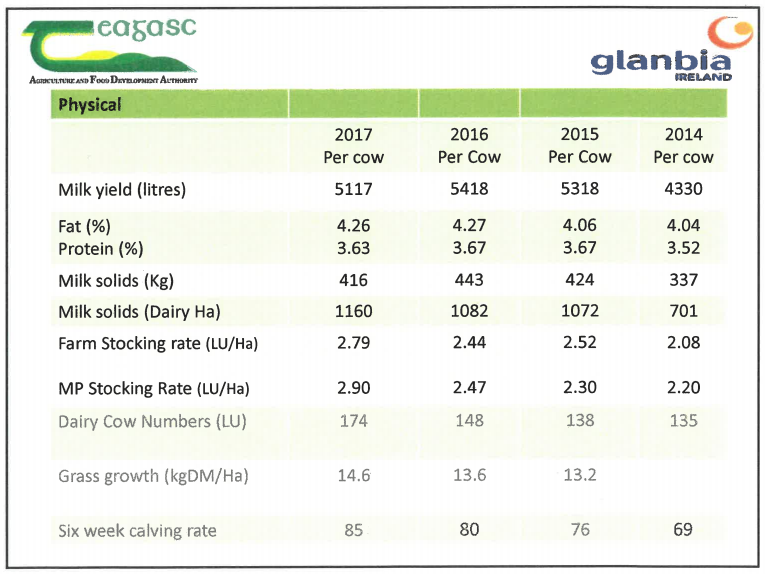 Looking at profitability, a net profit of €678/cow was achieved in 2017. Although this is only €125/cow ahead of 2014, it’s worth noting at this stage that a large degree of investment has been made in the business over this period.

Along with bringing in extra cows, Paddy has made a significant spend on grassland improvements and infrastructure.

Commenting on the extra cows coming to the system, Richard O’Brien – co-coordinator of Teagasc/Glanbia Monitor Farm Programme – said: “The one lesson from today, and we have to keep this in our minds the whole time, is that expansion eats cash. It costs money.”

He added: “When you’re bringing in a lot of heifers, it’s like buying the heifers off yourself. Over 50% of the herd here are first and second-lactation animals.

Richard also touched on the infrastructure developments and the impact that will have on the fixed costs of the business. 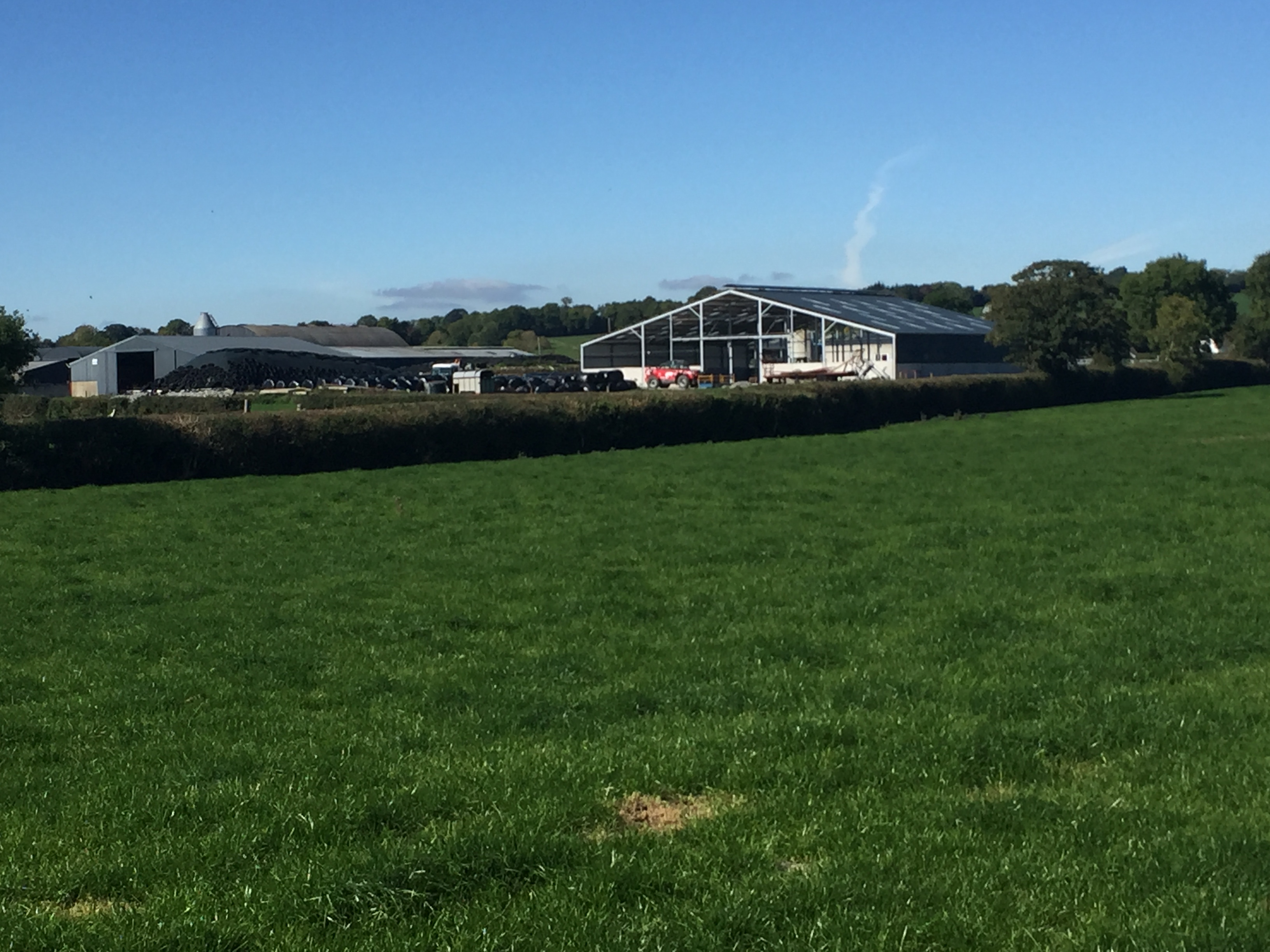 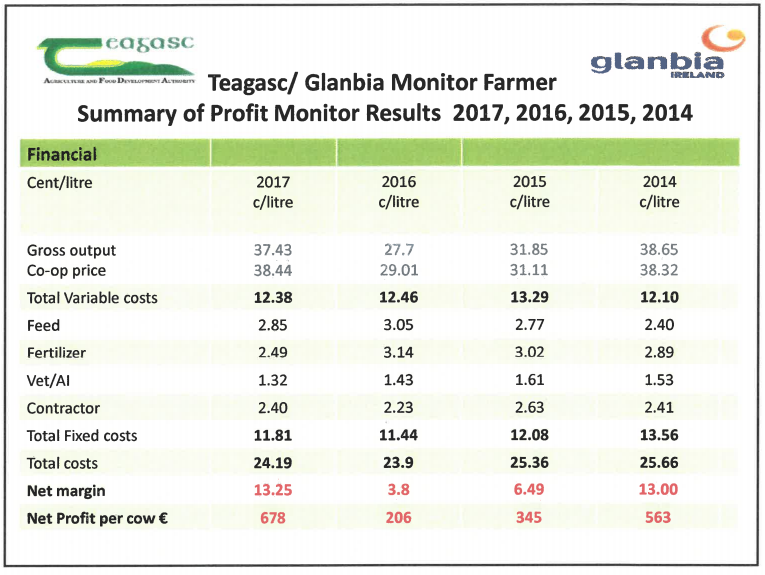 The six week calving rate has improved from 69% in 2014 to 85% in 2017. This has been achieved by focusing on improving live weight gain (LWG), which is a big factor in heifer performance.

Paddy now weighs heifers and looks at body condition scoring regularly and, importantly, he acts on this information.

Heifers are now split into two groups – light and heavier animals – with the light group getting preferential feeding. In addition, in spring 2016, Paddy decided to use easy-calving dairy AI on the heifers for the first time, which has worked well. 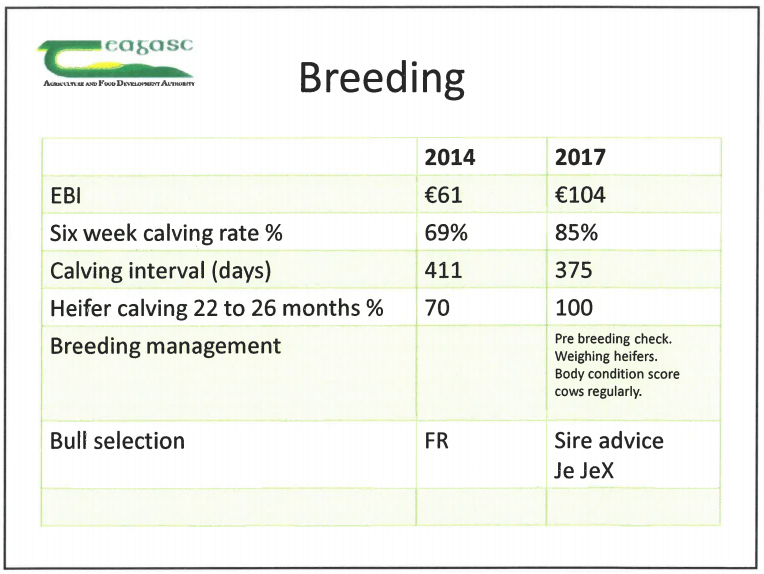 Jersey and Jersey-cross bulls have been used for the first time this year to change the cow type on the farm.

“We’ve put Jersey straws in all the cows this year. We got a lift in fat and protein three years ago and we’ve sort of plateaued since, so I think the next step is crossbreeding,” Paddy said.

Half of the bulls used on the farm this spring were pure Jersey, while the other half were more than 60% Jersey. A mixture of daughter-proven and genomic Jersey bulls were used, but a focus was also placed on high-EBI sires.

On other reasons why he has chosen to go down the crossbred route, he said: “With the bigger herd, we’re walking further distances, so I’m looking for a more robust, easily-managed animal.”

Along with the introduction of Jersey genetics, milk solids yield is also likely to increase as the herd matures. As it stands, 50% of the cows in the herd are either first or second-lactation animals.

With these improvements – and plans in place to milk 200 cows next spring – Paddy hopes to produce 100,000kg of milk solids per cow in the future.

By rising milk solids production from it’s current position to over 500kg/cow, the business will be better off to the tune of approximately €80,000 each year, when milk is valued at 30c/L.

At the overall stocking rate of 2.6LU/ha, Paddy needs to grow at least 14.4t/ha of grass to ensure that adequate feed is provided and to avoid unnecessary feed purchases.

Touching on the importance of stocking rate, Richard said: “This farm will not survive at a stocking rate of 2.8LU/ha. At 2.6LU/ha, the farm needs to grow 14.4t/ha every year.

“With farms like this – a very dry farm – I wonder will it ever get to the levels of growth that we see on heavier-type farms. 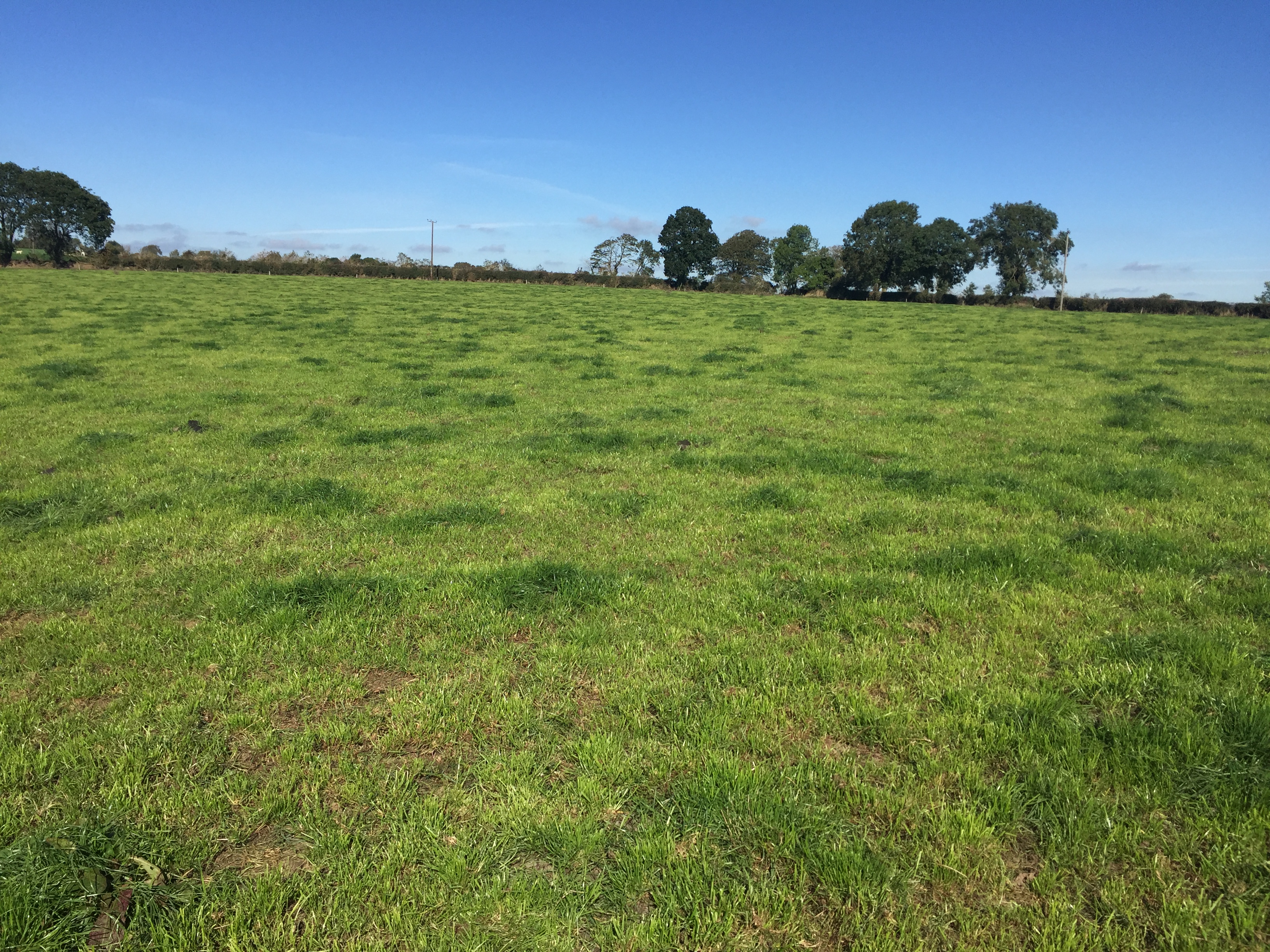 “Last year, he grew 14.6t/ha, but he’s down 4t/ha this year because of the drought and the drought has a big impact on a farm like this.

“At 2.6LU/ha, he will need to grow 14.4t/ha. At 2.8 cows per hectare, he will need to buy feed from outside. On a farm like this, we need to be cognisant of will we reach the peaks that heavier, clayier farms are going to reach.” 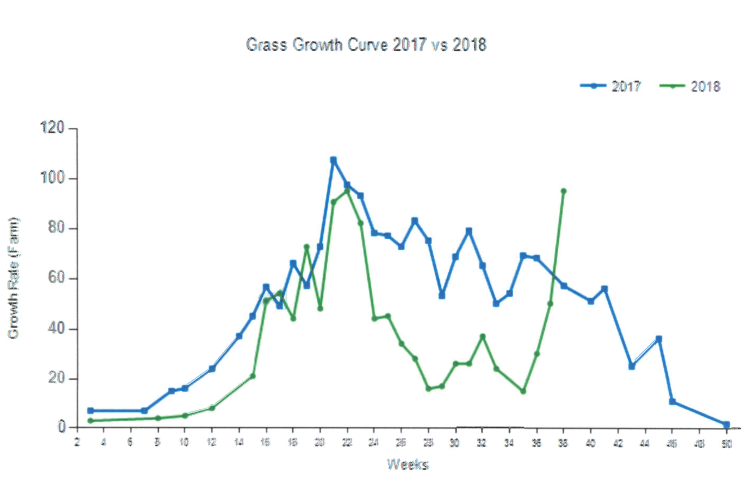 As mentioned, Paddy’s grass growth is back approximately 4t/ha this year on the same time last year and costs have risen as a result.

Although Paddy had €40,000 worth of silage left in the pit after last winter, an additional €40,000 of concentrate (1t/cow of extra meal) had to be purchased to bridge the gap over the summer months.

Only recently did the supplementation rate drop back from 10kg/day of meal to 3kg/day of meal in the parlour and, although this level of meal feeding is high, it helped to make a considerable dent in this winter’s forage deficit.

As it stands, the deficit is approximately 53t of silage, or the equivalent of 40t of ration. If the empty cows in the herd were culled (empty rate of 11%), this would rectify this issue.

He invested €265,000 on a 26-unit herringbone milking parlour and dairy and €30,000 on a bulk tank. The parlour is open plan, with good cow flow, and is designed to be as labour efficient as possible.

It has automatic cluster removers, variable milk pumps and a plate cooler – and the capacity for one person to milk 180 cows per hour. 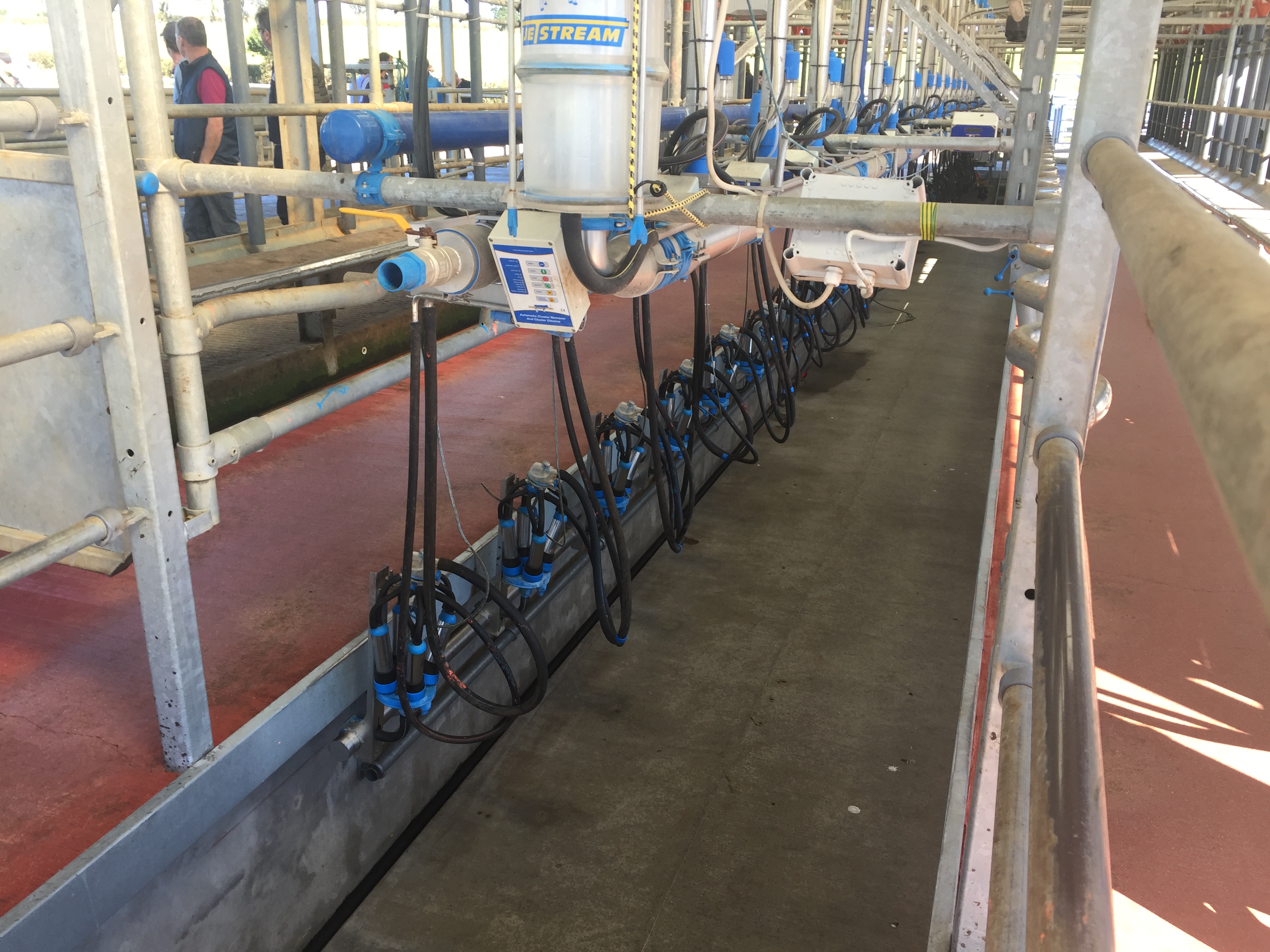 Paddy invested €120,000 to increase accommodation, with housing practically doubled to accommodate 250 cows. He has also invested in field infrastructure, a silage slab and slurry storage.

With borrowings to support investment at this stage, Paddy is managing finances very carefully. He is working with a six-year financial plan, but is keeping a regular eye on Profit Monitor and cash flow figures.

Paddy is navigating his progress steadily as the farm expands, aiming to have a sustainable system that can be managed in a simple way.

He is doing this with the support of a full-time student each year. Although his parents – Michael and Maria – are retired, they still help out and offer helpful advice. 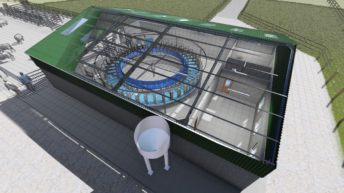