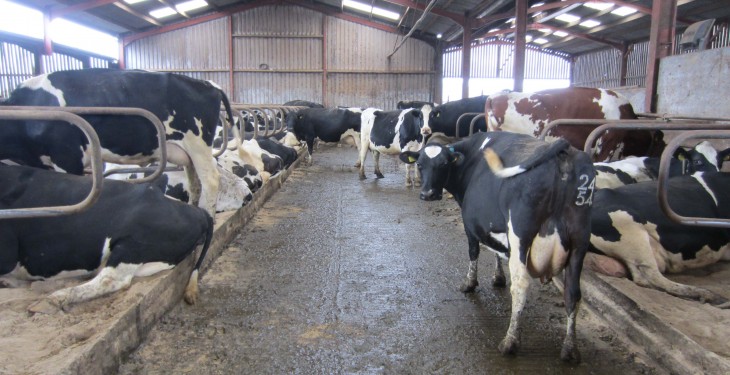 IN FOCUS: In recent weeks a group of mid-Tyrone dairy farmers attended a two-day study tour to south Wales organised by the College of Agriculture, Food and Rural Enterprise  dairy advisors, Jane Sayers and Trevor Alcorn.

The first element of the tour was a visit to the Welsh Dairy Show, Carmarthen, which is a very similar event to the winter fair held at Balmoral. The farmers had the opportunity to see a large selection of dairy stock and the latest technology available to the industry.

The following day the tour included three farm visits the first of which was to Roger Lewis, Poyerston Farm near Pembroke. Lewis manages a herd of 270 autumn/winter calving Holstein cows with an annual yield of 9000 litres/cow/year. Milk from forage is approximately 4000 litres/cow and is achieved by feeding a combination of high-quality grazed grass and maize and wholecrop silage. To date 185 cows had calved within a two month period, allowing Roger to manage the herd as one group throughout the year in relation to feeding, breeding and management.

The farmers then moved on to Gelli Aur College Farm, which consists of 600 acres of grassland, 30 feet above sea level with an annual rainfall of 70 inches. The 550 cross-bred cows are managed in two separate herds – spring and autumn calving, yielding approximately 4500 litres/cow/year and 6000 litres/cow/year respectively. The aim of both herds is maximise the use of grazed grass with cows being turned out to grass by early February and housed again in late November.

The final visit was to a first generation farmer Howell Richards. He started off farming 40 acres of land approximately 30 years ago. Today he farms 1700 acres, milking approximately 2170 cows, plus replacements. Cows are housed full time and milked three times per day through a 60 point rotary parlour. This is carried out by over 20 staff who are employed on the farm. Due to the number of cows being milked, the parlour is working for almost 24 hours/day with three 8 hour shifts. Staff operate on a rota basis to ensure the smooth running of the whole operation. Howell is on target to sell almost 24 million litres of milk this year and believes that margins should be good due to the increased milk price and reduced concentrate price.

After seeing three very different farms and how they operated, the farmers noted that key to success regardless of farming system or scale of operation is attention to detail and technical efficiency, in all aspects of the business.