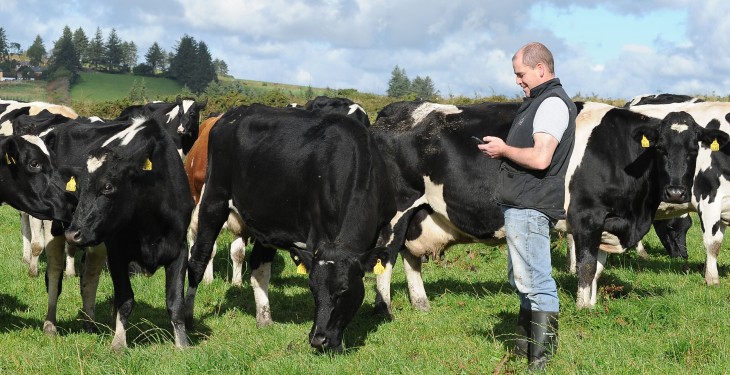 Liam O'Keeffe, a Cork farmer checks his cows while using the Herdwatch app.

The average calving interval in dairy herds that use the Herdwatch app is 26 days shorter than herds that don’t, recent figures show.

Fabien Peyaud, Herdwatch co-founder said the benefits of a reduced calving interval include increased milk production, as the cows have a longer lactation and a tighter calving pattern.

Research from Teagasc shows that dairy farmers could loss up to €200 on an annual basis due to their cows calving interval being more than 365 days.

It shows that a one-day increase in calving interval results in a €11.89 reduction in profit over a cow’s lactation. This fall in profit mainly comes from higher feed costs and reduced milk production.

Teagasc data also shows that a longer calving interval can effect the volume of milk sold from the entire herd, while it also has a negative impact on calving date and surplus livestock sales.

According to Fabien, one of the main reasons for this shorter calving interval is the ability to record pre-heats and set reminders through the Herdwatch app.

When a cow shows heat before the start of the breeding season, farmers can record that information on the spot and the app will keep a reminder for when the cow is due to cycle again.

Fabien said that this greatly reduces the chances of missed heads. This is important, he says, as Teagasc figures show that each missed heat costs the dairy farmer €250.

According to ICBF figures, the national average calving interval for a dairy herd was 392 days in 2015, compared with just 366 days, or 26 days less, for dairy farmers using the Herdwatch app, he said.

All breeding information recorded through Herdwatch also gets sent to the ICBF automatically.

This year, an estimated 130,000 cows will have their breeding information recorded in Herdwatch, and passed on to ICBF automatically. This includes artificial insemination, natural serves and pregnancy scans.

Herdwatch user Declan says:  “It’s great, I can serve a cow and record that straight away through the phone while she is still in the crush and the information gets sent to the ICBF for me, so it eliminates that job too.”

The app will also inform farmers what cows are due to repeat, which means the chances of missing a cow breaking are also reduced.

“The beauty of the Herdwatch app is that you can just check your phone to see when that cow is due to be served,” another Herdwatch user said.

Thousands of farmers are already using Herdwatch for easy breeding and compliance. A free trial is available on www.herdwatch.ie and farmers can also text ‘frs breeding’ to 51444 to request a call back from the Herdwatch team.

In association with Herdwatch.