The value of output produced from the Irish sheep sector is estimated to have reached €262.6 million in 2017 – a 2.9% or €7.4 million increase on the previous year.

Figures taken from the ‘Output, Input and Income in Agriculture Preliminary Estimate’ report – published by the Central Statistics Office (CSO) earlier today – also show that the value of 2017’s output climbed by over €18 million when compared to 2015.

Despite the increase in output value, the additional monies generated from last year’s output did not necessarily result in higher returns for sheep farmers.

In fact, a large part of the increase in output value related to additional supplies rather than an increase in price.

Delving deeper, it’s estimated that output volume jumped by 3.6% last year. And, when we consider that the value of this output only increased by 2.9%, it essentially means that Irish sheep farmers produced more for less last year.

Despite the positive trend in output value reported, Irish sheep prices actually declined by 5c/kg to reach an average of 477c/kg last year.

Other notable throughput increases included: cast slaughterings (ewes and rams), which climbed by 50,747 head or 13% last year; and lamb throughput, which jumped by 6% to reach almost 1.7 million head.

According to Bord Bia, some 57,000t of Irish sheepmeat were exported last year – an increase of 12% on year earlier levels.

Despite the challenges of sterling fluctuations, Irish sheepmeat exports to the UK increased by 8% last year. This was primarily due to less New Zealand lamb being available on the market. 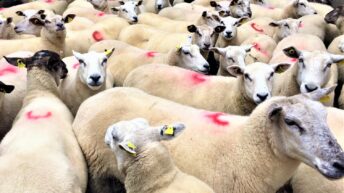