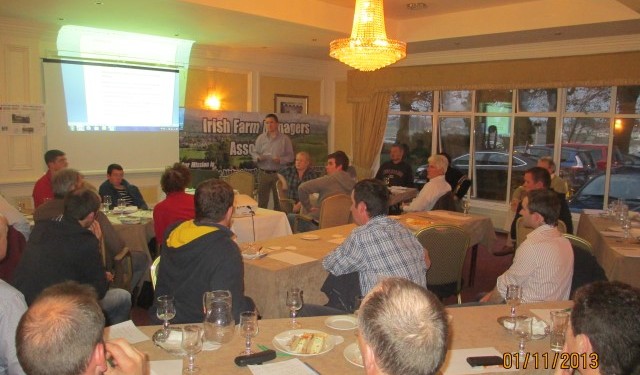 Grasstec‘s  Bertie Troy  facilitated the workshop on behalf of the IFMA. Speaking to AgriLand he explained the workshop was focused on trying to create a document to aid farm owners and farm managers in the creation of potential share farming arrangements primarily within the dairy industry.

“The IFMA have a lot of young members, more needs to be done for them in the area of share farming. As an industry we have to pursue solutions that attract young people into the dairy industry. Share farming is an obvious solution to this. There is no perfect solution to this issue. But something must be done. The idea behind the workshop was to tease out some of the potential problems or issues of share farming, both from the perspective of the farm manager and farm owner.”

Troy referred to various share farming arrangements in operation in the UK and New Zealand, which he said should be adapted to suit the Irish situation.”The market is moving forward, the abolition of quotas is only 18 months away. There are individual members of the IFMA that are currently in the process of negotiating share farming arrangements with existing dairy farmers who for various reasons want to share the responsibility and potential revenues associated with the expansion that is around the corner.

“The IFMA is fully committed to seeing that mutually beneficial agreements can be put in place between managers and dairy farmers in the context of share farming arrangements.” According to Troy, farm management is not marketed successfully enough in Ireland. “People who might be interested see a lack of opportunity in terms of jobs and career enhancement. They see there’s no obvious ladder of progression which has traditionally been the case in Ireland.

“Of course some farmers will have certain reservations about the share farming model. However the arrangements that the IFMA is currently developing with their members include an initial 12-month probation period where both the farm owner and the manager work alongside each other and ultimately see firsthand if both parties are suited to working alongside each other.

Troy explained further: “It is within this 12-month period that an agreement can be tailored to suit the needs of both parties. The farmer owner is not losing ownership of any land. The farm manager in most cases will be looking to get ownership of some of the existing herd or to bring additional cows onto the farm where room for expansion exists post 2015. The manager will assume responsibility for the day-day management of the farm with proper reporting structures in place between both parties.”

Speaking to AgriLand, chairman of the IFMA, Jim Treacy, welcomed the arrival of such a document. “It’s definitely needed.” In the meantime, the IFMA said it will shortly have assisted in completing one of Ireland’s first share farming arrangements between one of its members and an existing dairy farmer looking to take a step back from the daily management of his farm. “We believe it can be a template for others to follow in the future,” he said.

Pictured: The audience at the IFMA farm workshop