There has been a spate of rural crime in a number of counties across the country in the past week with thefts reported in counties Tipperary, Laois, Galway and Meath.

In Co. Tipperary Gardai are investigating the unauthorised taking of a tractor from a field in the Lorrha area of Nenagh that occurred between Saturday (February 2) and Monday (February 4).

Investigations are ongoing, a spokesperson for An Garda Siochana confirmed.

Meanwhile, in Co. Laois, Gardai in Stradbally arrested a man in his 40s in relation to the theft of a quad bike and trailer.

The stolen quad had been taken last Tuesday (January 29) from Curraghclone.

The man was charged and remanded on bail, Gardai have said.

Galway Gardai are investigating the theft of diesel from tractors in the south east of the county.

Also taking place on Tuesday night (January 29) a number of items were stolen from a building, and fuel was stolen from six vehicles. No arrests have been made and investigations are ongoing.

According to Galway Bay FM, the diesel was stolen from several parked tractors at the Bord na Mona site in Clonfert.

A television and oil heater were also taken during the incident.

The incident occurred at 6:10am when the vehicle was stolen from the driveway of a house at Mornington Avenue.

Gardai were immediately alerted and they conducted searches of the area. The minibus was discovered at Wellington Avenue. Two males were arrested.

One of those arrested was processed for the suspected offence of driving whilst intoxicated.

The two men – both aged 19 – have been charged and will appear at Trim District Court in connection with this incident, Gardai have confirmed. 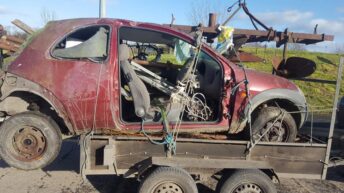 Captured Ka and ridge plough ‘carted’ off in Kilkenny